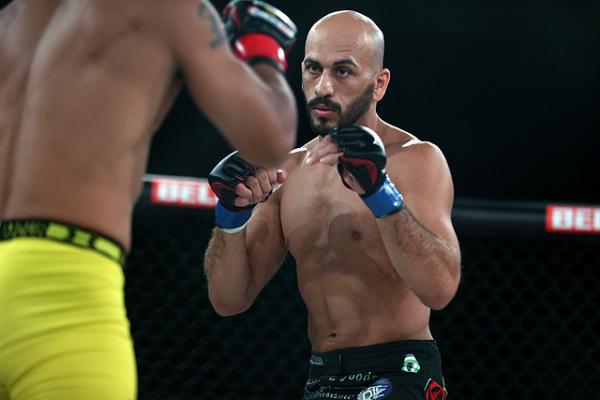 Bellator MMA heads to the Pechanga Resort and Casino in Temecula, Calif., for Bellator 219.

The main event of the night takes place in the lightweight division, where Saad Awad meets Brandon Girtz. Awad had put together a four-fight winning streak before he fought former UFC lightweight champion Benson Henderson. Awad was unable to get anything going and dropped a decision to the former champ. Girtz has been on an entirely different run. He is 1-4 in his last five fights. His last fight was a submission loss to Bellator lightweight titleholder Michael Chandler almost a year ago.

The co-headliner features former featherweight champion Daniel Straus in a move up to the lightweight division. He starts this new chapter against Shane Kruchten. Straus is 2-3 in his last five fights, but he is currently on a two-fight skid. Straus picked up his last win in November 2015 when he claimed the featherweight title from Patricio “Pitbull” Freire. This will also be his first fight since late 2017. Kruchten comes into the contest following a loss via early first-round knockout in his Bellator debut against Aaron Pico.

The lineup also includes a middleweight fight in which kickboxing star Joe Schilling makes yet another run at a victory in MMA against Keith Berry. At welterweight, former champion Andrey Koreshkov takes on Mike Jasper.

There will be a couple of preliminary-card fights airing at 7 p.m. ET on Bellator.com. The main card will air on the Paramount Network at 9 p.m. ET. Following the conclusion of Bellator 219’s main card, the postlims will air on the Bellator MMA mobile app.

The lightweights take center stage on this card. In the headliner, Saad Awad meets Brandon Girtz. In the co-main event, it’s Daniel Straus and Shane Kruchten. Of this bunch, only Awad has had a recent strong stretch, but he’s coming off a loss to Benson Henderson. Will any of these four men turn heads on Friday night?

Unfortunately, none of these guys are going to turn in a flashy performance. They aren’t really known for flashy endings, and we will most likely watch a couple of decisions at the top of the card. If there is going to be one, though, it would most likely come from either the former featherweight champ Straus or his opponent, Kruchten.

Straus has some great wrestling. If he gets back to a heavier reliance on those skills, he can become a dominant force in any weight class. Straus doesn’t have a flashy or fan-friendly style, but a three-round smothering of Kruchten would be a great showing that helps to put him back on track. Straus lost his last two fights, both by way of submission, to Bellator mainstays Emmanuel Sanchez and Patricio “Pitbull” Freire.

Straus has had four fights with Pitbull, and these fights have been some of the best Bellator has put on. If he can recapture the magic he had when he took the belt from Freire in their third fight, it most definitely will be a head-turner. Straus displayed great striking to mix in with his wrestling in that outing, but these elements of his game have dissipated a bit over his last two fights. Maybe Kruchten is the type of tune-up fight he needs to get back on track.

This would also be a huge win for Kruchten, if he manages to come out on top. Straus is a Bellator veteran and former champ. A victory over someone with those credentials would turn a lot of heads in Bellator. Kruchten is the underdog in this fight, though, and it’s unlikely he will win.

This is arguably one of Bellator’s weakest recent offerings. Is ONE Championship, which has an absolutely stacked card on the same weekend, poised to overtake Bellator as the world’s No. 2 promotion?

ONE has absolutely done a great job in making this a heated competition to be the next organization behind the UFC. In terms of talent, this Bellator event isn’t one of the weakest recent offerings, but it’s hard to disagree with that assessment when we factor in the potential for exciting and meaningful fights.

It would be hard for most promotions to compete with this ONE fight card. The lineup includes former UFC lightweight champion Eddie Alvarez and former UFC flyweight champ Demetrious “Mighty Mouse” Johnson. Both fighters are making their promotional debuts. The bill also includes four championship affairs to fill out the main card. Also, it helps that ONE isn’t finalizing its cards just a few days before the event. So, yes, in some realms ONE may have taken over as the No. 2 promotion.

Even the UFC would find it hard to compete in Asia with this card, and Bellator MMA is no different. However, Bellator has done this before opposite UFC events. There are no belts on the line at Bellator 219, which makes it extremely hard to pick Bellator over ONE. None of the fighters in the main or co-main event are even on a winning streak, either. It’s hard to give this effort any points for upside.

In a head-scratching move, David Rickels is a part of the postlims, where he goes up against A.J. Matthews. Rickels always puts on a brawl and makes for an exciting fight. Matthews will be more than willing to go toe-to-toe with Rickels and put on a show for the fans who stick around following the main card. Rickels, who has fought some of the best fighters in Bellator, should be a great fight for Matthews as he seeks to get to the top of the division.