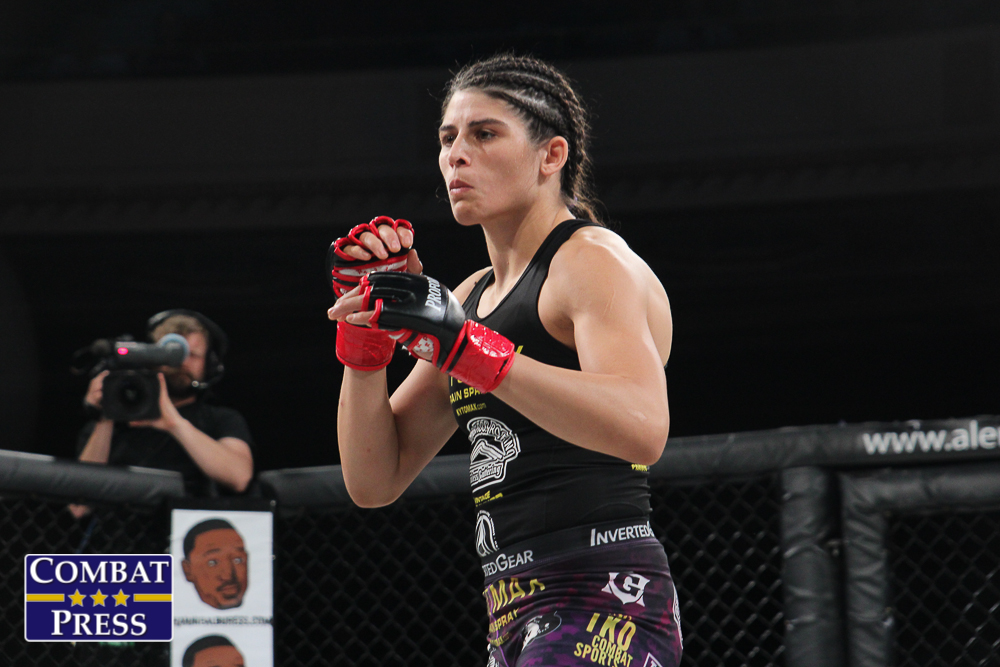 Let’s examine the women’s bantamweight division, a weight class that was the original women’s division in the UFC. It’s been thinned out due to the recent addition of the flyweight and featherweight divisions, so the UFC needs to look to add talent here.

This spot looked like it was going to go to Panamanian fighter Joselyne Edwards, but Alpar snatched the spot away by beating Edwards to close out 2018. Alpar is a veteran of the sport who is highly underrated. She’s a very tough fighter.

Alpar is just 27 years old, so she has plenty of time to continue developing in this sport. She’s pretty well rounded and has taken kickboxing fights before. She has finishes with both knockouts and submissions, though she goes the distance quite a bit. Alpar fought just once in 2018, when she beat the aforementioned Edwards for the Legacy Fighting Alliance bantamweight championship.

With that LFA title under her belt, Alpar has almost become a shoo-in to make the UFC roster. A fighter with her experience and skill, especially in a division that is lacking many bodies right now, should be fighting for the company. Don’t be shocked if she gets a shot this year.

Avila makes her second straight appearance in this series. She turned a rough start to 2018 into a great finish to the year. This effort by the 30-year-old Californian put her at the top of a short list of bantamweight fighters the UFC needs to snag.

Avila is a good striker who likes to throw hands in her bouts. She has knockout power and the aggression that makes her opponents uncomfortable. The year 2018 started out disappointingly for Avila, who lost due to a gruesome hand injury against The Ultimate Fighter 28 alum Marciea Allen. However, the “Raging Panda” healed up and fought twice more, scoring knockouts of Ashley Deen and Alexa Conners, the latter of whom was dropped by a front kick and follow-up shots.

Avila is clearly skilled and exciting enough that she should be on the UFC roster right now. When you consider some of the talent at the bottom of the division, there’s no reason to think Avila could not beat them.

We don’t normally include fighters in this series who are over the age of 34 or 35 years old, but we’ll make an exception for Brazil’s Moreira. The soon-to-be 38-year-old is truly one of the best female bantamweights outside the UFC, and though her time clock may be shorter than that of most others on this list, the bantamweight class is a shallow division where she could do quick work.

The Chute Boxe representative has not lost since 2015, when she fell to current UFC roster member Taila Santos. The heavy-handed striker has not taken the easy route, either. While she has spent her time in the Brazilian regional scene, she’s consistently fought some of the better fighters the country has to offer, as opposed to crushing can after can en route to an inflated record. Moreira even got a shot on the Brazilian edition of Dana White’s Contender Series in 2018, where she scored a close decision over Dayana Silva.

Moreira’s window for making the UFC will likely close shortly, so the UFC needs to make a move now. The women’s bantamweight division is in dire need of some bodies, and Moreira could definitely compete at the highest level. She likely would never become a champion, but she’d win some fights, test younger fighters and bring some excitement in the meantime.

Santana has not competed in 2018, but she still deserves a mention here. The Alex “Cowboy” Oliveira protégé is definitely a fighter to watch out for, and she could be a dangerous adversary for any woman in the UFC’s bantamweight division.

The Tata Fight Team rep has only competed three times in her career, but she has looked impressive in all of those outings. She definitely needs to step up her competition level, but that will come with time, especially outside of the Brazilian regional circuit. She did not fight in 2018, but she was scheduled to compete on Dana White’s Contender Series against eventual contract recipient Luana Carolina. Had she competed, maybe it would be her, not Carolina, who signed that contract.

Santana has obviously already caught the eye of UFC scouts. That’s not enough, though. She needs to get busy. She will likely not be signed by the UFC until she scores at least another win to break her streak of inactivity. Once that’s accomplished, UFC President Dana White and company might have to put pen to paper with her.

Bursting onto the scene in 2018, Spangler is a wrestler coached by UFC veterans Fabiano Scherner and Josh Barnett. She was just an amateur coming into the year, but when it was all said and done, she established herself as a bantamweight to know going forward.

The 23-year-old Spangler has a wrestling background, the strongest skill to have as a women’s MMA fighter. She’s combined that with strong jiu-jitsu skills, acquired at Gracie Barra Portland, to make her an overall menace on the mat. She made her pro debut with Invicta this year and bested Sarah Kleczka. She then fought outside Invicta and defeated Kelly Clayton. Finally, she returned to Invicta to fight her biggest test to date, Shanna Young. Spangler again picked up a win. She has no finishes as a pro, which is something she’ll have to fix going forward.

Spangler is a tough fighter physically. Toughness will take a fighter a long way. She’s likely the biggest (and youngest) blue-chip prospect in the division right now. The weight class is dying for new talent, and Spangler represents Perhaps the biggest hope in this regard. The UFC should recognize this and ink her to a deal. The company could build her up slowly and turn her into a title contender within a few years.