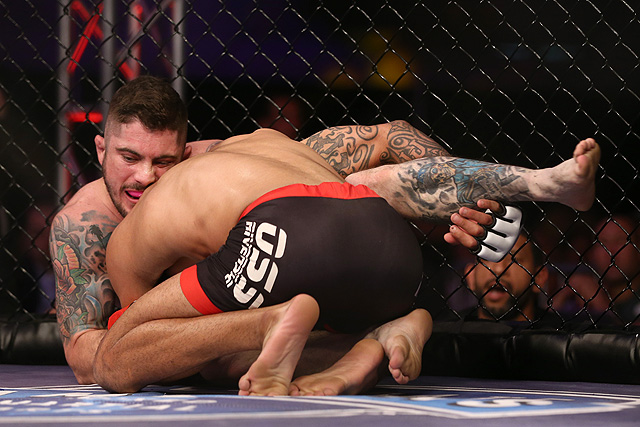 LFA 48’s Ryan Lilley: Easy on the Jack and Coke

Everybody has to be great at something, right? The wisest piece of advice in order to find the ideal career is to think about what you would do if money was not an object.

Ryan Lilley found out a couple things about himself at a young age. First, he’s very competitive. Second, he’s really good at a couple specific crafts. It all started with wrestling at age 9.

“I hated losing,” Lilley told Combat Press. “When we were on, like, a team sport, if a guy didn’t pass me the ball or something, there was always someone to blame. I really liked wrestling even more, because of that. There was no one to blame but yourself. I did it for two years, but then kept playing other sports. I didn’t make the basketball team freshman year, and I was walking out, and wrestling tryouts were right next door. The coach was trying to get people to come in. He got me to come in, and I ended up making varsity. I got my butt kicked every day from a guy who was a senior at the time.”

The years that followed would prove to be pivotal in Lilley’s life. He grew up near Sacramento, Calif., with his mom. As he started to get into the swing of high school, though, it was time for a change.

“After freshman year, I moved to Southern California to be with my dad,” Lilley explained. “That was the best thing that ever happened to me. He taught me how to be a man. He gave me a future learning how to install alarms and cameras — the stuff I do today still.

“I went to a local bar to watch a UFC fight, and I saw this pretty girl, so I sat down to talk to her. She was like, ‘I can beat you up.’ And I said, ‘Why do you say that?’ She said she trained at Bas Rutten’s Elite MMA. I told her I grew up wrestling, and she said I should come in some time. I went that Monday and found out I really sucked at throwing punches, so I signed a one-year contract right then and there. A year later, I had my first amateur fight.”

Lilley is still fighting. He’s still installing alarms and cameras, too. He has moved well beyond his 13-fight amateur career. At 28 years old, he is 9-3 as a pro. Now, he’s set to headline Legacy Fighting Alliance 48, which airs live on AXS TV on Sept. 7.

“I’m very competitive,” Lilley said. “I always knew I was going to be great at something, and I found what I’m great at. I’m good at installing alarms, too, and I get paid well, but I don’t see myself doing that for the rest of my life full-time. Mark [Bieri, LFA matchmaker] told me after my last fight — when I already had a Jack and Coke in my hand — he said, ‘Hey man, not too many of those; I’m going to be calling you soon.’ I got an email the next day. Then, as I was watching LFA 46, I was signing my contract to fight Raufeon Stots as the main event [of LFA 48].”

Lilley’s last fight was a first-round knockout of Jordan Winski at LFA 45 in July. It was his third knockout in his current three-fight winning streak. All but one of his wins have come by stoppage, and he has only been stopped once. Between his training at Elite MMA, MusclePharm and RVCA Sport, he has a very well-rounded workout regimen, and it is obviously paying huge dividends.

“I went from working full-time and training only in the evenings to now — I thank God for my boss at APS Security — where I can start early in the morning and, depending on where I’m at, Tuesday through Fridays, I’m at MusclePharm from 10:30 a.m. to about 1 p.m.” Lilley said. “Then, I go back to work. After work, I go straight to Elite MMA.

“I switched up a couple little things for this fight, just because he’s a southpaw. I have a plan: go out there, feel him out, put pressure on him, and yeah. I don’t go out there just headhunting. I go out there and I take my shots. If I see an opportunity, I’ll just explode on it.”

Lilley feels that he excels in this sport. His spot atop an LFA card is an opportunity to prove his worth to the biggest show around.

“At this point, we’re all trying to get to the UFC,” Lilley said. “You just got to take the opponent. I’m not scared of anybody. At this stage of the game, if you want to step up and get to the next level, you have to be the one who’s up there and highly ranked. I think Stots is a great opponent. He’s a good wrestler. It looks like he has some stand-up game, too. And Friday night, we’ll see who will be the better guy.”

Stots is currently 9-1 as a pro, but he is only 1-1 over his last two outings. His win over Arnold Berdon in December earned him the Victory FC bantamweight title. Lilley, meanwhile, is a two-division title winner at bantamweight and featherweight in the Gladiator Challenge promotion. This match-up is very much a battle of the two toughest guys on the block from top regional promotions.

On Friday night, the LFA returns after a one-month layoff. The event takes place at the Viaero Center in Kearney, Neb.. It’s a homecoming of sorts. This is the same venue where the original Resurrection Fighting Alliance — one of the two companies that merged to form the LFA — hosted its first show in late 2011. That event featured big names like Tim Elliott, Jens Pulver and James Krause. Now, almost seven years later, Lilley is at the top of the bill.

“I’m a very exciting, explosive fighter. I’m not one of those lay-and-pray guys,” Lilley said. “ I’m not just going to lay on you and hope the clock runs out. I go out there to finish fights. You look at my record, and I’ve got nine wins — and eight of those are finishes. The only win I got that I didn’t finish is when I beat Andre Ewell for my bantamweight title, and he did really good after that, and the UFC just signed him.”

Some people have jobs they hate. Others do what they love. Lilley was lucky enough to land in the latter category. At LFA 48, the kid from central California will get a chance to perform for the world and move closer to his dream of a spot on the UFC roster.