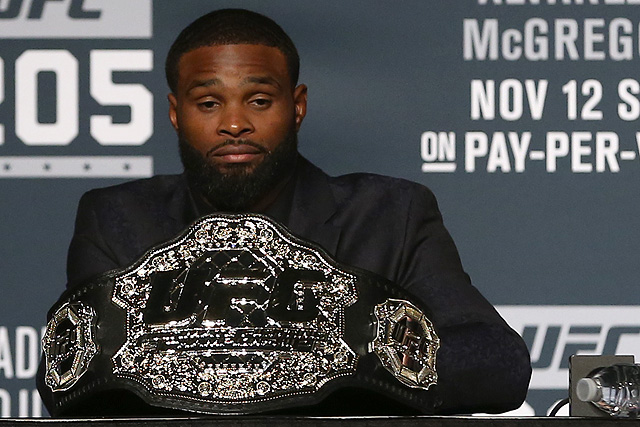 Tyron Woodley vs. Darren Till Headlines UFC 228; Colby Covington to be Stripped of Interim Belt

UFC 228 in Dallas now has its main event. The promotion has announced that welterweight champion Tyron Woodley will take on second-ranked Darren Till.

UFC President Dana White confirmed to ESPN that interim welterweight champion Colby Covington will be stripped of that title once the Woodley-Till bout gets underway.

The ESPN report also stated the reason for the stripping was a combination of a lack of a main event for UFC 228 and that Covington had nasal surgery on Tuesday. The interim titleholder wanted to wait until UFC 230 at Madison Square Garden in November, but the UFC did not wish to wait that long.

Till offered a brief reaction on Twitter, tweeting a Union Jack flag along with the main event poster for the event. Both Covington and Woodley have yet to react publicly to the announcement at the time of this writing.

Till is coming off of a unanimous decision victory over Stephen Thompson in the main event of UFC’s visit to Liverpool, England on May 28, a fight in which he was three pounds over the welterweight limit.

Woodley has not entered the Octagon to defend his belt since his UFC 214 appearance against Demian Maia in July 2017. The St. Louis native injured his shoulder in the first round of that fight and has been recovering from shoulder surgery.