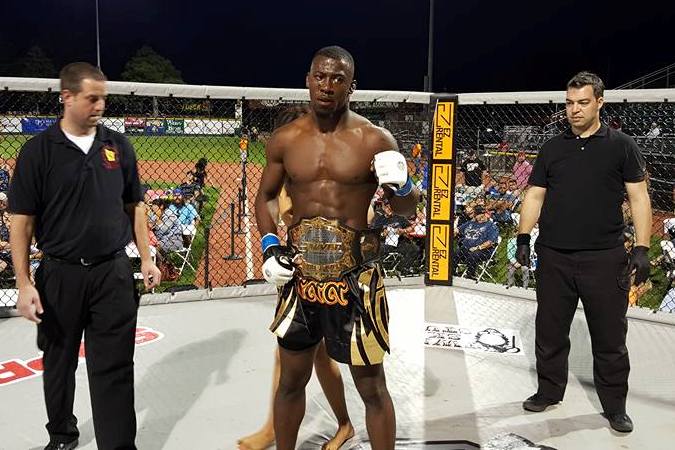 It’s funny how childhood shapes people into who they are today. Of course, people are genetically inclined into certain behavioral characteristics, but environment plays a big role as well.

Ask many athletes why they do what they do today, and it can often be linked back to some aspect of childhood. Alton “The Bo-Man” Cunningham’s athletic career traces back to pure self-entertainment.

“I grew up the only child,” Cunningham told Combat Press. “I grew up in the hood, man — right outside Memphis, Tennessee. I lived right across the bridge in Arkansas. It’s rough down there, and, being the only child, getting picked on [and] having to grow up in that type of environment, everything I did was individualized. It was super natural for me to go into a sport that was individualized.

“Growing up, I was into professional wrestling. I was always an angry kid. I was just mad, because I knew that I had a bigger purpose. There was something out there that I needed to do that was not in pro wrestling. Once Brock Lesnar made the transition to mixed martial arts, I realized there was something to this. It really touched me and made me feel complete. As I started to watch it more and learn more about the sport, I became obsessed with it. From my freshman year or sophomore year, I knew, for a fact, that I would be in the position that I am in now. It was a dream that I turned into an eventual reality.”

Cunningham moved to Madison, Wis., at age nine. He transitioned to a very different environment than the rough area where he spent his early years.

“Once I became obsessed with [MMA], we used to set up this fight week, where we would all strap on the gloves,” Cunningham explained. “We were so underground, we were doing it in like locker rooms, and the teachers didn’t know about it. I was undefeated, man. I was the champ. Nobody wanted to fight me. I was in a majority white school, and people used to mess with me all the time. I never dealt with racism until I moved up to Wisconsin. I beat up this big football player, and people were like, ‘Oh no.’”

Several years have since passed, and Cunningham’s reality has evolved. He has now been fighting in a real cage for over four years, between his pro and amateur careers. He only lost once as an amateur, and he stands undefeated through five outings as a pro.

“All by knockout — I‘m the most violent middleweight, man,” said Cunningham. “That’s not a promo. That’s the truth. I see all these guys, and they are looking to point-fight and win. Listen, we are in there to fight. You’re trying to hurt me, just like I’m trying to hurt you. We’re fighting. I’m coming in there with violent intent.”

Cunningham has only been a pro for 15 months. In March, after his last win over Wayman Carter at Legacy Fighting Alliance 34 in Minnesota, he got some fantastic news. He was in line for a shot at the UFC by way of Dana White’s Tuesday Night Contender Series.

“Five or six weeks before that fight, I was supposed to fight in a main event in Milwaukee,” Cunningham said. “During fight week, I got an injury. I felt like I could’ve fought, but the doctors wouldn’t let me. That kept me out of training for like a week and a half or two weeks. Then, LFA offered that fight, and I wanted to fight right away.

“The toughest fights are the one like Wayman — the fights where you are expected to win. He was tough, and he came to fight. I was able to finish him with some elbows in the third round.”

Within a few weeks of that win, Cunningham got the call from the UFC. On Tuesday night, he faces Bevon Lewis under the Dana White’s Tuesday Night Contender Series banner. Lewis is also undefeated through five pro fights, but he has only finished two opponents. He fights out of the famed Jackson-Winkeljohn camp in New Mexico.

Cunningham trains out of both Perfect Moves Martial Arts in Madison and Pura Vida BJJ in Milwaukee. Perfect Moves is his home, but he spent more time in Milwaukee for this fight in an effort to gain some new tools and more confidence.

“I bring pure violence,” Cunningham stated. “I fight like it’s always my last fight. I’m looking to finish that fight right away. I‘m not looking to go in there and take some punches. I’m looking to knock this dude out, turn to [UFC President] Dana White, and say, ‘Hey Dana, give me someone to fight in a couple weeks. I’m ready to go.’ That’s what they want.”

Cunningham would like to thank all of his coaches and training partners, his girlfriend, his son and all of the people who have supported him on his journey to the UFC. Follow Alton on Twitter: @AltonTheBoMan
Advertisement