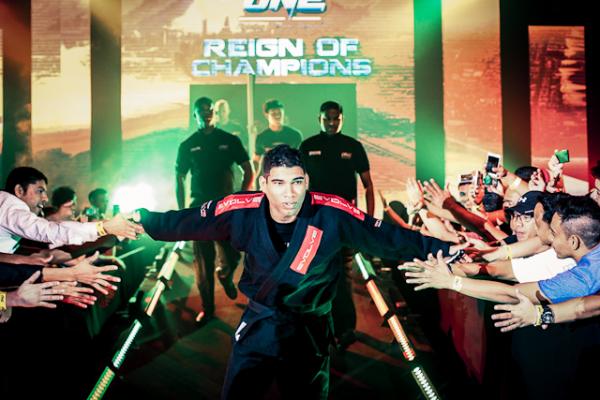 Out of Obscurity: ONE Championship, LFA 3 and Real FC 6

ONE Championship’s latest event, dubbed “Throne of Tigers,” features Ev Ting and Kamal Shalorus in the headlining bout, but it’s a featherweight clash of undefeateds that captures our attention. Russian fighter Movlid Khaibulaev puts his spotless 11-fight record on the line against Brazilian Herbert Burns, who has been perfect through six pro fights. If you need some Friday morning MMA to go with your 6 a.m. cup of coffee, this would be it.

The 26-year-old Khaibulaev started his professional career in 2011 and registered two victories on the regional circuit before becoming a mainstay of the Eurasia Fight Nights promotion’s Fight Nights Global series. Prior to fighting under the EFN banner, the “Killer” almost made it into the Cage Warriors cage opposite Artem Lobov, a future UFC fighter. The fight fizzled, however, and so did another scheduled bout for Khaibulaev, leaving him on the sidelines for nearly two years before his EFN debut. Once the Eagles MMA export finally did make it into action for EFN, he immediately started racking up the wins. He tooks decisions in his next two bouts and then went on a three-fight knockout streak. After another decision win to kick off 2016, the combat sambo specialist resumed his penchant for finishing opponents by scoring two knockouts and one submission finish.

Burns has only six MMA contests under his belt, but his resume also includes a number of Brazilian Jiu-Jitsu accolades, including a world championship. The Evolve MMA BJJ instructor turned pro in 2012 and scored a submission win on the Brazilian regional circuit before joining the ONE roster. “The Blaze” has dispatched five opponents, including three by choke submission, under the ONE Championship banner. The 29-year-old has been out of action for nearly a year and a half since his September 2015 win over Timofey Nastyukhin.

Khaibulaev has done well in his time with the EFN organization, but his level of opposition is lacking. His most recent victory, a 72-second submission finish of Paata Robakidze, and the prior technical knockout of Vugar Bahshiev account for the Russian’s two most notable wins. However, Robakidze was just 21-11 and Bahshiev stood at 13-10 heading into their respective encounters with Khaibulaev. Meanwhile, his first-round finish of Aleksandr Panasyuk, which isn’t even properly credited to him in all fighter databases, stands as his only recent win over an extremely experienced for with just a single-digit number of losses.

Burns has a much stronger resume. His first ONE Championship victory ended the unbeaten streak of prospect Edward Kelly, who entered the fight at 5-0. Burns went on to decision grizzled veteran Harris Sarmiento and Japanese prospect Hiroshige Tanaka. Then, he scored a first-round submission of former ONE featherweight titleholder Honorio Banario. Then came the submission of the aforementioned Nastyukhin. Outside of Sarmiento, who held a 36-25 record when he met Burns, the combined record of the BJJ champ’s ONE opponents stood at 32-6 when they clashed with him.

Burns might still be getting his footing in the MMA arena, but he’s already posted a number of impressive victories. Khaibulaev should push Burns in all areas except, of course, grappling. However, that area might be the key to victory for Burns. He’ll have to initiate scrambles, but if he can bring the Russian to the mat, another quick submission victory could be his for the taking.

The third event from the Legacy Fighting Alliance lacks a title fight, but it does feature a superhero. OK, maybe not quite the Superman of DC Comics fame, but a “Superman” all the same. His name is Ryan Spann, and he’ll attempt to end the unbeaten streak of fellow middleweight Trevin Giles in the evening’s headliner.

After a 4-1 mark as an amateur, Spann turned pro in 2013 and posted four straight first-round submission victories. After winning his fifth fight via a five-round decision to capture the Best of the Best 1 middleweight crown, Spann dropped his sixth pro fight — for the Best of the Best 3 middleweight championship — when he suffered a 21-second TKO loss to Brandon Farran, who remains one of the most experienced foes on Spann’s resume. “Superman” rebounded from the loss by defeating Artenas Young, another veteran competitor, via third-round submission and adding another victory via first-round submission in his next outing. However, he really turned heads when he destroyed Larry Crowe in just eight seconds at Legacy Fighting Championship 42. The American Top Team fighter parlayed his three-fight winning streak and highlight-reel knockout into a middleweight title bid against Leo Leite, but he was outworked for five rounds and dropped a decision to the Brazilian. He moved up to light heavyweight for his two most recent bouts, where he first scored a submission win over Aaron Davis and then suffered a submission loss to jiu-jitsu ace Robert Drysdale. The 25-year-old is now back at 185 pounds for this fight..

The 24-year-old Giles has already made the rounds in the “Triple A” level of MMA. His pro debut came under the Legacy banner in 2014. He needed just 75 seconds to pick up his first victory and then just over two minutes to capture his second win, also in the Legacy cage. After two TKO victories, including one over the aforementioned Crowe, with the Fury FC promotion, Giles again returned to Legacy and notched a second-round submission win. He strayed once more, this time heading to the Caribbean Ultimate Fist Fighting organization for another TKO win. He made his way to the Resurrection Fighting Alliance next, where he turned in a second-round submission finish of fellow prospect Josh Clark. He bounced back to Legacy in September for his most recent taste of success, a third-round submission of veteran competitor Ike Villanueva. “The Problem” has certainly been a problem for every man who has crossed his path. The Elite MMA Houston export has never seen the scorecards.

“Superman’s” kryptonite lately has come in the form of strong grapplers. If Spann gets taken down, he can be outworked or even finished. Giles has the capability to do exactly that, even if he is giving up roughly five inches in height and reach. The most troublesome part of Spann’s pro career has been in his struggles against legitimate competition. He fell to Drysdale, Leite and Farran, and his most notable victories came against fighters who brought records of 10-8 (Young), 9-4 (Crowe) and 7-4 (Davis). Giles aligns with the former group more than with the latter trio. There’s a good chance that “The Problem” could be just that for the LFA’s resident superhero.

This week’s hidden gem takes place in Brazil via a promotion based out of Japan. Real Fighting Championship is hosting the Arzalet Fighting Championship 1 card this weekend in Sao Paulo. The card has an international flavor and includes decorated Brazilian Jiu-Jitsu player Rodolfo Vieira, UFC veteran Ildemar Alcântara, well-known journeyman fighter Jorge Patino and a scheduled grappling match featuring the UFC’s Charles “do Bronx” Oliveira. Yet, it’s the featherweight tournament final between once-defeated Ukrainian Vladislav Parubchenko and Japanese veteran Takahiro Ashida that might deserve the most attention.

There are actually two Parubchenkos on this card. Vladislav has the higher-profile bout, but Dmitriy, who is still undefeated, also fights a seasoned Japanese veteran. Vladislav, 23, started his pro career in 2011 and finished his first seven opponents, including four via submission and three by way of knockout. He served as a headliner at a June 2015 Tech-Krep FC event, but it resulted in his first and only setback when he was dropped by Alexandr Durymanov in the first round. The Germes fighter rebounded to deliver four straight choke submissions, including a 39-second tournament quarterfinal finish of Daisaku Tanaka at Real FC 4, and six straight wins overall. His tournament semifinal bout at Real FC 5 ended in another submission win, this time against veteran Yoshifumi Nakamura.

The 27-year-old Ashida has been competing professionally since 2010, when he debuted with the Deep organization in Japan. He went just 2-1-2 over his first five fights before finding a groove and rattling off seven straight wins, including a 10-second knockout of Yusaku Fujisawa and a decision win over veteran Takashi Ito. The Brave Gym export stumbled again when he suffered a submission loss to Katsunori Tsuda in 2013, but he responded with another four victories. Ashida struggled through a rough patch from August 2014 through June 2015 in which he lost four straight, including a split-decision defeat against former WEC champ Miguel Torres and a first-round submission loss to Kleber Koike Erbst. Ashida has emerged from those dark times to capture another five straight victories. He submitted rookie fighter Moussa Cisse in his tournament quarterfinal bout at Real FC 4 and edged Nurbergren Sharipov on the scorecards in the semifinals at Real FC 5.

Ashida is a solid competitor, but he tends to falter when stepping up to face tough competition. Parubchenko is another tough task for the Japanese veteran. The Ukrainian has demolished almost everyone he has encountered, with the exception of Durymanov, who was able to score a big knockout finish. Ashida has finished a majority of his victories by strikes, so Parubchenko will have to be wary of Ashida’s stand-up arsenal. However, the rising Ukrainian star should be able to trade effectively with Ashida and get the better of him on the ground as well. Ashida has been submitted several times, and Parubchenko might be the next to force the Brave Gym fighter to tap.