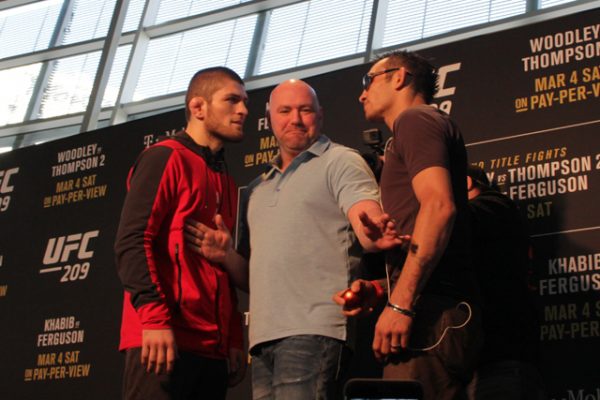 Throughout the history of MMA, there have been numerous fights that fans wanted to see but never came to fruition. Randy Couture never fought Fedor Emelianenko. Jon Jones did not meet Brock Lesnar. Cristiane “Cyborg” Justino never got her shot at Ronda Rousey. Anderson Silva and Georges St-Pierre never had their superfight. Most of these fights were never even close to booked. Tony Ferguson and Khabib Nurmagomedov, on the other hand, have been scheduled to fight.

The adage states that if you fool me once, then shame on you, but fool me twice, shame on me. Well, what happens when you get to the third and fourth times? This is the case for the upcoming (fingers, toes and all other appendages crossed) UFC 223 bout between interim lightweight champion Ferguson and his challenger, Nurmagomedov.

It would be an understatement to say that getting these two men inside the Octagon with each other has been difficult. It almost seems more likely that Conor McGregor will defend his title before these two fighters are enclosed in the cage.

The pair were first set to clash just over two years ago at The Ultimate Fighter 22 Finale. Unfortunately — and unpredictably at the time — this wouldn’t be their first setback. A Nurmagomedov injury pushed back the bout until April 2016 at UFC on Fox 19, which marked the UFC’s first visit to Tampa, Fla., in seven years. Just 11 days prior to the event, Ferguson was pulled due to a lung issue. The bout was rescheduled yet again, this time for UFC 209 almost a year late. Another Nurmagomedov injury prevented the fight from happening at this event.

In recent MMA history, it’s hard to recall a fourth pairing of two fighters after three failed attempts. It’s as if the MMA gods won’t be satisfied until these two warriors decide their fates inside the Octagon.

The failed pairings between these two men has become common knowledge. Since their first failed attempt to meet inside the Octagon, Ferguson has compiled four straight wins, coming against Edson Barboza, Lando Vannata, Rafael dos Anjos and Kevin Lee. Meanwhile, the injury-plagued Nurmagomedov has defeated the Darrell Horcher, Michael Johnson and the aforementioned Barboza. The activity between the two fighters is close, but one could argue that Ferguson had a tougher road leading up to this contest.

One thing stands to be answered. It’s not who will come out victorious, but if this fight will really be worth the wait.

Ferguson has the skills to submit Nurmagomedov, and it’s no surprise that Nurmagomedov’s takedowns will be a key to his own chances at victory in this fight. Has the excitement been lost, though? Does this fight even carry hype when it’s not guaranteed that either man will make it to the cage?

This is a true fight to determine who is the most skilled fighter at 155 pounds, one of the deepest divisions in the UFC. This fight will crown a champion who will be ready to defend his title whenever and against whomever. The former champ McGregor has held this division back long enough. As long as both fighters make it inside the cage at UFC 223, the entire division and MMA world will come out the winner.