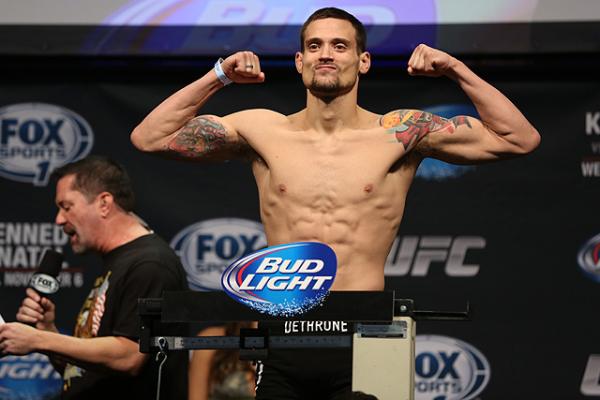 It can sometimes be difficult to hear full-time athletes whine about how much money they do or don’t make and how many sacrifices they make, when all they do is train, eat and nap. Their friends, the other working stiffs in this world, might act understanding to the athlete’s face, but, in reality, there is a unanimous eye-roll happening in their heads. The athletes who really garner the respect of their peers are the ones who do what they need to in order to make a life for themselves. Work and play can go hand-in-hand.

Mixed martial arts does not pay a lot, plain and simple. It does not make a lick of difference what any promoter says. The list of fighters who are set for life based solely on their cage appearances is extremely short. For everyone who is not Conor McGregor or Ronda Rousey, it is often what they do outside the cage that really makes or breaks success.

Many people know James Krause as a two-time contestant from The Ultimate Fighter, an occasional broadcast analyst, or simply a crafty veteran fighter who has graced the cages of the UFC, Bellator, the Resurrection Fighting Alliance, Titan FC and even WEC. While it is no secret that he is also a businessman who owns Glory MMA and Fitness in the Kansas City, Mo., area, Krause’s business reach stretches far.

At only 31, Krause is by no means the typical entitled millennial. He works very hard to make a great life for himself, and he does not lead the life of any average fighter.

“I’ve been doing this for a long time,” Krause told Combat Press. “I know a lot of guys who are full-time fighters, and they come train in the morning, and when training is over, they go home and they eat and they nap. I work on business. I’m passionate about business. It’s not like I’m doing something I don’t want to do. I’m doing something that I enjoy doing. I like competing in business as well. I love it, and I choose to do it.

“I think I’m doing a damn good job. I’m on a three-fight win streak, business is good, and all the avenues are rocking right now.”

If one were to grade Krause’s success in managing his diverse career, he would easily earn an A+. His gym is currently pushing 350 members, and he has an awesome team helping him run the show. Everyone is staying busy, and the results are right on track.

His fighting career is on track as well. After back-to-back lightweight wins in July 2015 and February 2016, Krause had to take some injury time off. He resurfaced on The Ultimate Fighter: Redemption, which aired from April to July in 2017. He was the only fighter on the show with a current UFC contract, but he had to step back up to welterweight for the season.

The reality-show appearance went fairly well for Krause. He made it to the semifinals before getting submitted by eventual winner Jesse Taylor on the last pre-recorded show of the season. He came back at the finale event in July to beat the season’s dark horse, Tom Gallicchio, by unanimous decision.

“Tom’s a really tough guy to take away anything from,” Krause said. “It’s really difficult to look good fighting him. He’s one of those guys that’s going to make a lot of good guys look bad, because he’s so damn durable. His striking is not the best, but his ground game is ridiculous. I knew that going into the fight just from training with him on the show. I fought him how I needed to win and win decisively.”

The victory put Krause back on track after an unusually long layoff. However, while the show added a new level of experience to his career, he also came to the realization that lightweight is truly his ideal division. On Sunday night at UFC Fight Night 124 in St. Louis, in his home state of Missouri, Krause will make his return to lightweight as he faces Alex White.

The Missouri native White is currently sitting at 3-3 in the UFC over the last four years. Prior to his Octagon debut, he was undefeated, with a decent balance of knockouts and submissions. His last fight ended in a second-round TKO of Mitch Clarke at UFC 215 in September. However, White has a slight height and reach disadvantage to Krause, and Krause is also a Brazilian Jiu-Jitsu black belt to rival White’s blue belt. This is a very large gap in skill sets.

“Alex is tough, you know?” Krause explained. “He’s a tough kid. He’s durable, long, accurate striking, never been submitted. I don’t think anybody’s ever tried to take him down and submit him, but he’s got all the intangibles. He’s got all the things a coach would want in a fighter — he’s durable, he’s mentally tough and good cardio.

Even in a phone booth, Krause has a clear advantage. In addition to his 31 fights, dating all the way back to November 2007, he has an amazing crew of coaches and training partners. After training at his home gym and also with his longtime training partners Tim Elliott and Zak Cummings in Las Vegas, he finishes up camp at Factory X Muay Thai in Englewood, Colo. There, he gets to spar with a ton of high-level athletes and world-class strikers, which brings the finishing touches to his non-stop preparation.

With his current UFC lightweight record sitting at 4-3, Krause can extend his current streak to four wins with a victory over White. He is still young with plenty of time to make a run to the top, and he really has nowhere to go but up.

While 2017 got Krause back in the saddle in terms of his fighting career, fight fans also saw his debut on the Fox Sports broadcast team. He did very well in that role, and while no formal plans are in place moving forward, this is another avenue he would like to continue to build upon in his diverse career.

“I’m doing them on an as-needed basis,” Krause said. “I don’t have anything planned right now, but I’d like to do something after my fight. Right now, my fight is my focus and my priority.
“For all of the fighters, we all love fighting, we all love talking about the fights, and we love being around the sport. If I can get paid to be on the other side of the desk and talk about other people getting hit, rather than getting hit, I think that’s a good thing. It’s great for me. I enjoy the sport. I watch the sport as a fan. For me, I’m getting paid to talk about things I already talk about anyway.”

So, in addition to being a full-time businessman, a full-time fighter, and one of the hardest-working guys in the business, Krause is still open to adding new ventures, especially if it involves getting paid to be a part of the sport that consumes just about all of his life.

“My out-of-camp life is pretty much the same as my in-camp life,” Krause said. “I live and breathe the gym, I love business, I’m at the gym every day, I train every day, regardless if I have a fight or not.”

Next time a full-time fighter, meaning of the “train-eat-nap” variety, complains about how he or she does not make enough money or makes a lot of sacrifices, just think about James Krause. This guy works his butt off, more than makes ends meet, and all of it happens in combat sports, which, at the end of the day, is his true passion in life. While the other guys are napping, Krause is grinding. This Sunday night, live on Fox Sports 1, fans will once again get to see what his hard work is all about.