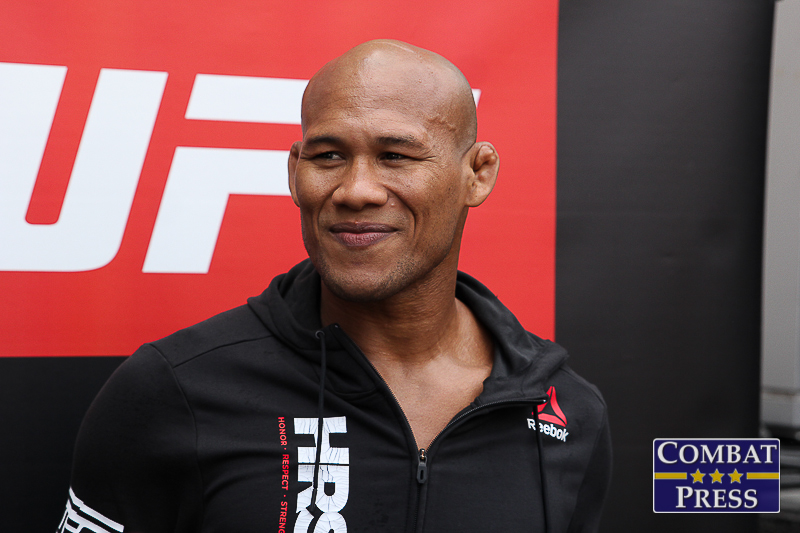 Even though 2018 is but a few weeks old, it already feels like things are just plodding along in the world of the UFC. The promotion announced a handful of exciting fights for when springtime rolls around, but the fight cards taking place in the here and now are feeling more like an obligatory watch than a leisurely event to enjoy.

That said, the UFC is offering us another card on Fox, so at least the cost is little more than just our time. This latest, 27th version of the UFC on Fox features a stylistically appealing main-event rematch that is basically five and a half years in the making.

Ronaldo “Jacare” Souza and Derek Brunson squared off for the first time in the glory days of Strikeforce in 2012. Brunson became part of Souza’s stretch in which the Brazilian lost just one fight in five years. It took Jacare just 41 seconds to destroy Brunson. Both Souza and Brunson have knocked on the door of middleweight title contention in the UFC, but neither has yet to break through.

The rest of this card features other fighters who are eager to make a mark in their respective divisions, including Dennis Bermudez, Andre Fili, Erik Koch, Bobby Green, Mirsad Bektic, Godofredo Pepey, Randa Markos and Justine Kish. If you’re the type of fight fan who likes to watch fighters who are eager to prove themselves and make a statement, there is a chance this could be the fight card for you.

The UFC Fight Pass preliminary card begins at 3:30 p.m. ET on Saturday, Jan. 21, followed by the Fox Sports 1 prelims at 5 p.m. ET and the main card on Fox at 8 p.m. ET. In the meantime, Combat Press writers Chris Huntemann and Dan Kuhl get you ready for all of the action in this edition of Toe-to-Toe.

Ronaldo “Jacare” Souza is back for his first fight since his loss to Robert Whittaker. Can the Brazilian get back on track against Derek Brunson?

Kuhl: I guess, to address the obvious underlying question, no, I do not believe that this will be an exact repeat of their first showdown five years ago. Last time, Brunson was only a couple years into his pro career and had mostly faced mid-tier regional fighters. Brunson’s toughest opponent so far, Kendall Grove, had just handed him his first pro loss. In recent years, Brunson has become a formidable force in the UFC middleweight division, running through some seriously tough guys, including Sam Alvey, Uriah Hall and Lyoto Machida. This will be a much different fight for Jacare.

Souza is now 38 years old, but he is not showing as many signs of slowing down as some may think. The Brazilian Jiu-Jitsu master is still finishing opponents left and right. The loss to Whittaker was a tough one — Jacare was knocked out in the second round — but Whittaker did the same thing to Brunson in the first round a little over a year ago. Jacare has very tight striking for a guy who’s bread and butter is the grappling game. Meanwhile, Brunson hits like a Mack truck. Jacare has become better, but he is on the downhill slide to 40. Brunson has become a veritable wrecking machine. This is a very interesting match-up, and one that’s a lot tougher to call than their first meeting.

After the fight with Whittaker, Jacare probably doesn’t want to keep this one standing. Jacare stood and traded with Brunson when Brunson was young and green, but he will not want to stand in range at this point in either of their careers. The Brazilian, as the crafty veteran that he is, will find a way to get the fight to the mat, where he will submit Brunson.

Huntemann: Can Jacare get back on track? Absolutely. He is still the most dangerous and probably the best BJJ practitioner in MMA — or at least on par with the likes of Demian Maia. It seems like it would take very little effort for Jacare to slap on some kind of hold and separate his opponent from consciousness.

All that said, it won’t happen. Brunson is simply one of the most streaking and dangerous fighters in MMA right now. As dangerous as Jacare is with his grappling, Brunson is that dangerous with his striking. His losses to Whittaker and Anderson Silva were aberrations. Brunson and Whittaker just went at it, full-tilt, so it was a given that someone was going to get knocked out. And look at what Whittaker has become since that fight.

I watched Brunson’s fight with Silva live and, simply put, he was robbed. He may have paid Silva too much respect, but Brunson was still the clear winner in my book. If you take away those two losses, Brunson is undefeated in his last seven fights, with five consecutive first-round knockouts. That’s just insane.

Jacare will always be someone to fear, but so is Brunson. Brunson will show once again why he is someone you do not want to exchange fisticuffs with, to put it mildly.

The co-headliner features Dennis Bermudez and Andre Fili, both of whom are just 2-2 over their last four fights. Fili has never won two in a row in the UFC. Bermudez has never lost three in a row in his career. Can Fili break his normal UFC pattern and win this fight?

Huntemann: I’m getting a case of deja vu at the moment, because I could have sworn Bermudez fought in the co-headliner of a Fox card in his last fight. Wait, that’s right. He did. He lost a close split decision to Darren Elkins in July 2017.

Here is another fun, random fact about Bermudez: the last time he fought on a UFC pay-per-view was at UFC 189 in 2015. That’s a long time.

I’m just going to follow the pattern at hand here and pick Bermudez to win this fight. Fili has alternated wins and losses since he joined the UFC in 2013. It’s pretty extraordinary, when you think about it. Bermudez has lost two in a row and looks like a far cry from the future contender that he appeared to be when he was on The Ultimate Fighter.

It’s likely desperation time for Bermudez, and with his back against the wall, he’ll come out swinging early and often to keep his UFC career going with a win.

Kuhl: Look, I get it. Bermudez is a veteran, and Fili has some level of name recognition. Bermudez is also 2-4 over the last three years, with his last stoppage win coming in July 2014. Yet, here he is, tied for 11th place in the UFC featherweight division? Fili’s most recent losses came to Calvin Kattar and Yair Rodriguez, who have both been killing it the last few years. Fili has a much more impressive recent record, but Bermudez is ranked higher. Am I missing something?

Fili has a serious length advantage, both in height and reach. He has a deep gas tank, too, and the raw talent to be a ranked fighter. Both guys have very effective takedowns, so-so accuracy in the striking department, and while Bermudez has a better chance of landing significant damage, the length advantage of Fili could pose a serious problem.

This one goes the distance, with Fili coming out on top. He has a chance of at least cracking the top 15 with this win.

Kuhl: Vinc Pichel and Joaquim Silva. Both men are enjoying three-fight winning streaks, and either one could crack the UFC lightweight top 15 with a dominant win. The division is incredibly stacked at this point, so both fighters will come in hungry to make a statement. This usually leads to a great fight.

Huntemann: Why do you always pick the fights I want to pick, Dan? Geez. Welp, since my colleague is a regular Frankie Fight-Poacher, I reckon I’ll have to go with my backup choice: Mirsad Bektic and Godofredo Pepey. If you saw Bektic’s fight with Darren Elkins last year, then you know he is capable of being involved in an entertaining fight — even if his opponent is the one who ended up having the more memorable performance. I have also made no secret of my joy of saying Pepey’s name, and by some strange and twisted sense of logic, I think that will translate to him doing his part to put on a memorable performance against Bektic. Just watch. You’ll see.

Huntemann: Your remote. I know I’m not supposed to encourage you to engage in channel-surfing or making use of your DVR when I preview a UFC card, but I just find it very difficult to generate any enthusiasm for this event. The main event could be entertaining, but the rest of the card just seems like a glorified FS1 Fight Night preliminary card. If you can use your DVR, then I wouldn’t blame you for adding this card to it. Meanwhile, if you can find something else to watch on Saturday night, I would strongly suggest it. If that makes me a bad MMA fan, I think I can live with that.

Kuhl: My answer is the same, but for very different reasons. The remote is a good pairing, because this entire card is a sleeper event. When you take a step back and consider who we are dealing with, this is by no means set up to be a boring card. Here is a short list of those capable of exciting finishes: Brunson, Jacare, Gregor Gillespie, Drew Dober, Erik Koch, Bektic and Pepey. It would be wise to have the remote nearby, because there is a high likelihood of a lot of commercial downtime between FS1 and Fox. We have seen pay-per-view events that leave a lot to be desired, while some fantastic events have aired for free. This one is set up to be the latter.