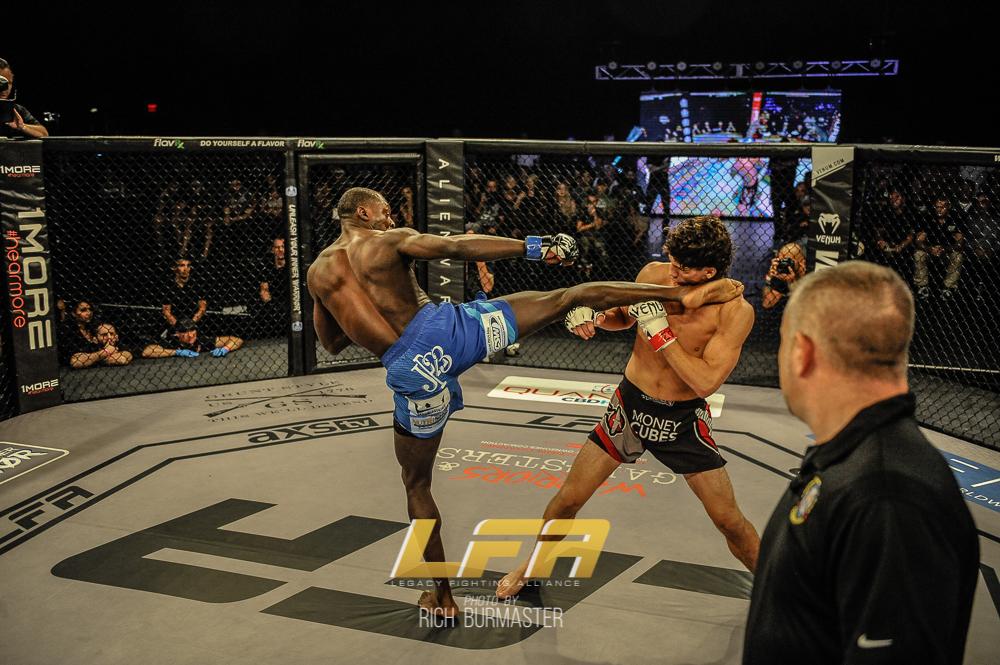 The Legacy Fighting Alliance is a breeding ground for talent poised to make the move to the UFC or Bellator. The promotion’s 30th event is certainly stacked with prospects, including the undefeated Jordan Wright. However, it’s the welterweight headliner between Curtis Millender and Nick Barnes that could produce the most UFC-ready talent in the lineup.

The 30-year-old Millender is enjoying a nice little run over his last five fights. He’s scored three decision victories and two knockout finishes in that stretch. The native Californian started off his career in similar fashion in 2013 and won his first seven fights, including outings against future UFC fighter Dominic Waters and The Ultimate Fighter 16 alum James Chaney. After he decimated Chaney in just 48 seconds, “Curtious” landed in Bellator MMA. Things didn’t go well for him, however. He fell victim to choke submissions in back-to-back fights against Brennan Ward and Fernando Gonzalez. He did recover to take a decision nod in his third Bellator contest against Steven Ciaccio, but stumbled again when he faced Eddie Mendez on a smaller regional show. The CSW and NOC Fight Team product turned things around in 2016 and notched two decision victories before landing back in Bellator for a showdown with Johnny Cisneros. Millender finished Cisneros in the second round, but then departed Bellator for the LFA, where he decisioned Kevin Holland and most recently finished Matthew Frincu in just 38 seconds.

Barnes streaked out of the gates in 2011 and won his first nine contests, finishing all but one of his opponents. In between these wins, however, he was also a participant on Bellator’s Fight Master reality competition. On the show, he defeated Brendan Tierney and Tim Welch, but fell to Cole Williams. The Und1sputed fighter’s first official loss came in 2015 against UFC veteran Jesse Taylor. “The Phoenix” lived up to his moniker by returning to the win column with a first-round submission of veteran James Terry under the Bellator banner and a decision nod over Jose Diaz in a Resurrection Fighting Alliance outing. Barnes ran into another setback when he was submitted by Brian Camozzi in an RFA welterweight title fight. He was absent from action for nearly a year before returning in August to score a split-decision victory over Chad Curry in his first LFA appearance.

Millender has had his share of struggles. He’s proven especially vulnerable when he’s on the mat, but it’s no easy task to take him down. If Millender is allowed to stand and bang, he has the power to finish opponents. His knockout of Frincu was spectacular, and he also boasts the finishes of Chaney and Cisneros. Millender has size over Barnes as well, with roughly four inches in height and five inches in reach over his foe.

Barnes has the submission game to give Millender some serious trouble, but his losses to Taylor and Camozzi provide some doubt in his abilities to defeat high-level opponents. Even Williams was able to hand Barnes a big loss on Fight Master, and it came via strikes, too. Barnes fed on overmatched adversaries early in his career, but he’s struggled as the competition has gotten tougher. He was even submitted by striking specialist Camozzi, which isn’t a good sign.

Millender has the tools to get the job done, likely via some form of knockout. If he delivers another spectacular finish, it might just be enough to punch his ticket to the Octagon.

Chris “Bukwas” Anderson has yet to make significant waves outside of his native Canada, but it could be just a matter of time before this middleweight stud is knocking on the door of the bigger promotions. For now, he’ll seek to maintain his perfect record while defending the Battlefield Fight League middleweight crown against veteran Matt Dwyer at BFL 53.

Anderson might only have six pro fights under his belt, but he’s also had 15 fights at the amateur level. He won all but two of those ammy contests before going pro in 2015. He started out as a welterweight under the BFL banner and won two fights before challenging for the 170-pound crown. Bukwas defeated Curtis Harriott via a doctor’s stoppage TKO and then defended the belt with a first-round technical knockout of Harriott three months later. From there, Anderson fought at a catchweight of 180 pounds and knocked out Dejan Kajic. He then scored a first-round doctor’s stoppage TKO of Jared Revel to claim the middleweight strap.

The 28-year-old Dwyer doesn’t have a flashy record, but he suffered most of his losses while fighting in the UFC. The Havok Martial Arts export made his pro debut in 2011 and won his first two fights. He suffered his first loss when he was knocked out on a slam by Marcus Aurelio. Dwyer righted the ship with first-round knockouts in each of his next three fights before stepping up to meet UFC veteran Shonie Carter. Dwyer scored a technical knockout finish of Carter and then added a TKO finish of UFC vet DaMarques Johnson. The back-to-back high-profile wins landed Dwyer a UFC contract. He only lasted 63 seconds in his Octagon debut against Albert Tumenov, but he returned with a first-round finish of his own in his sophomore UFC outing against William Macário. His success was short-lived, however, as he dropped decisions to Alan Jouban and Randy Brown over his next two fights before receiving his walking papers from the UFC. Dwyer returned to the Canadian regional scene and defeated Jesse Ronson in his most recent fight. Due to a number of factors, Dwyer has not fought since July 2016.

Anderson might be the more consistent fighter in this battle of ex-welterweights, but Dwyer’s definitely seen the tougher competition. Anderson’s best opponents were the 3-0 Harriott and the 5-1 Revel, whereas Dwyer has four UFC fights under his belt and regional wins over the aforementioned Carter and Johnson. Furthermore, Dwyer has demonstrated great effectiveness with his striking that has led to six first-round knockouts and eight total knockouts. Anderson was stopped on strikes as an amateur against Bronson Peterson, who has only managed a .500 record as an amateur. This doesn’t bode well for “Bukwas.”

Anderson can prove that he’s for real by scoring the win here, but that’s easier said than done. Dwyer’s mediocre record is misleading when placed in the context of a smaller regional fight. Dwyer was able to drop Macário with a superman punch and destroy the likes of seasoned veterans outside of the big show. He should be able to hand Anderson the first loss of his young pro career. Once the fists start flying, Dwyer is likely to find the knockout.

The Golden Warriors Fighting Championship promotion is on only its fourth event, and Mehdi Bagheri has grown along with the organization. This will be Bagheri’s third appearance with the company. The middleweight fighter draws Luc Rousseau as his opponent.

The 29-year-old Bagheri made his pro debut in mid-2016 when he submitted Jarek Kochanowicz on an Ultimate Beatdown card. His next two fights came with GWFC. First, he submitted rookie fighter Saber Athari in just 44 seconds. Then, he decisioned sub-.500 fighter Nosherwan Khanzada. Most recently, Bagheri made a trip to Thailand, where he submitted Javier Trujillo under the Full Metal Dojo banner. Bagheri, who was a member of the Iranian national wrestling team, serves as the wrestling coach at Monarchy MMA.

Rousseau’s first pro fight came in 2011, when the “Doberman” submitted Mohamed Ezzat, Abdul Hadi and Bayan Kenzhebaiuly in one night in the Malaysian Fighting Championship promotion. He fought twice in 2012, adding another submission victory and a knockout to his record. However, Rousseau then went inactive until his return in late 2017. His October fight came at a 220-pound catchweight, and he needed just 14 seconds to land a kick and knock out rookie fighter Rohali bin Rosli. Rousseau’s absence from the MMA scene is a result of his ventures into Brazilian Jiu-Jitsu and NAGA grappling competitions.

This fight pits a grappler against a wrestler, but neither fighter has been truly tested in the MMA world until now. Bagheri couldn’t score a finish over a fighter with a losing record who had suffered most of his defeats by way of stoppage. The Iranian also struggled as an amateur and fell via knockout against Guilherme Araujo, who has gone on to post a respectable 3-1 mark as a pro.

Rousseau’s biggest struggle appears to be his willingness to commit full time to an MMA career. The Frenchman has found success when he does compete, but his focus appears to be set on the world of grappling. Yet, his BJJ skills could be the difference in this fight. The “Doberman” tends to attack with submissions, but he can also score the knockout finish.

Rousseau’s skill set could be of great value against a wrestler like Bagheri, who might still be at a point in his career where he makes typical wrestler mistakes that leave him open for a submission. Rousseau will capitalize on those mistakes and coax a tapout from Bagheri.