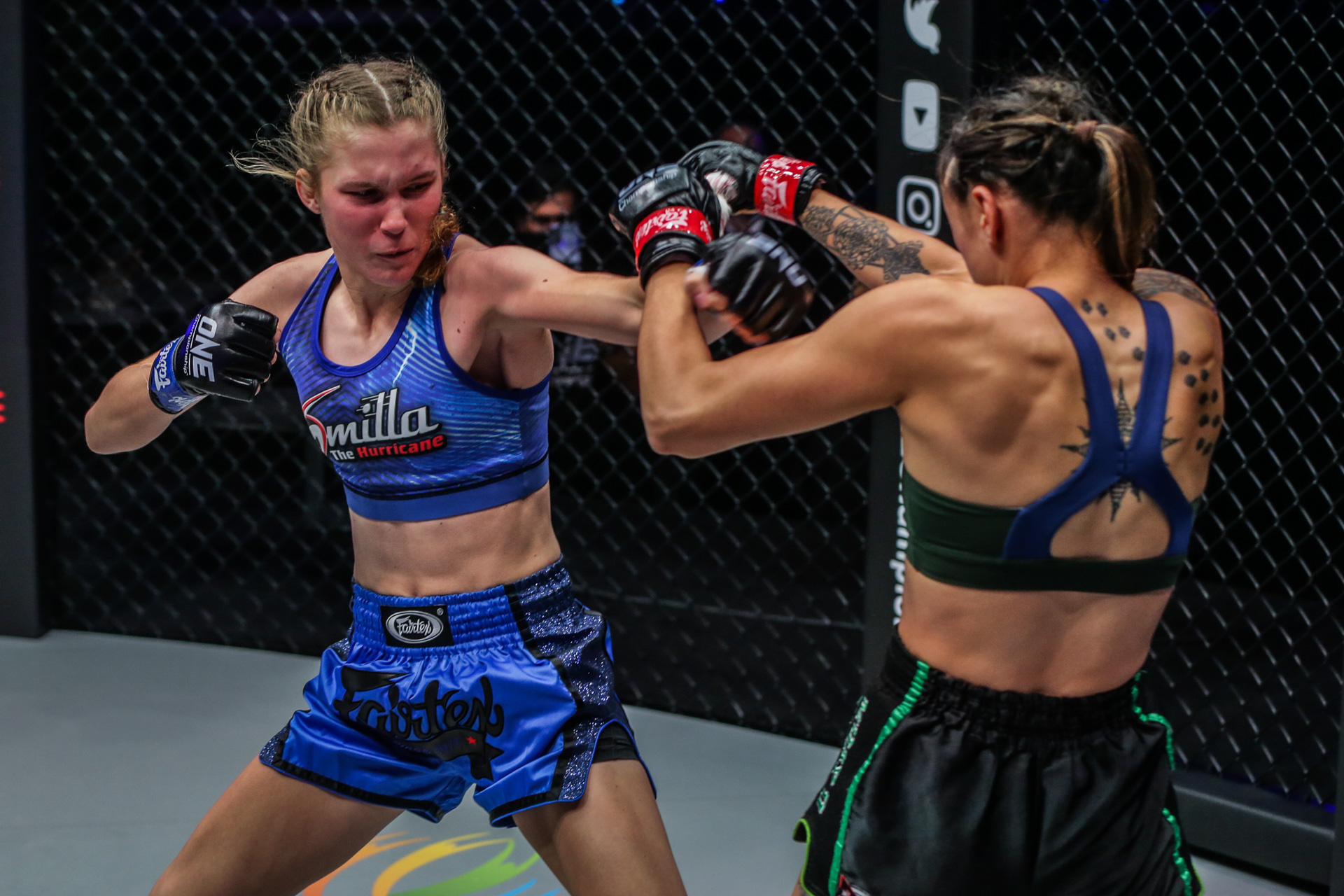 ONE 156’s Smilla Sundell: A Teenager in a Title Fight

What are most 17-year-old kids doing nowadays? Many might be getting ready for either college or going straight into a career. Some might be eyeballing military service or even starting a business. There are even some phenoms out there going straight into a professional athletic career. How many are living alone in Thailand, nearly 40 fights deep into a professional fighting career?

The answer to that last question is one, at least to the knowledge of the staff at Combat Press.

Smilla Sundell grew up in Sweden like any other kid, playing sports like basketball and karate. She once tried Muay Thai while on vacation when she was 11. However, when her family moved to Ko Samui, Thailand when she was 12, her life changed forever.

“We moved, because my parents both worked there,” Sundell told Combat Press. “It was different with the weather and culture, and especially in school.”

The weather was certainly different the tropical island of Ko Samui versus the Scandinavian weather in her homeland. It was on the island that Sundell began training in Muay Thai. After three years, when she was 15, her parents moved back to Sweden with her then-13-year-old sister, and she moved to the world-famous Fairtex Training Center in Pattaya, on the mainland of Thailand.

Now, at 17 years old, having never had an amateur fight, Sundell sits at 33-6 as a pro fighter. This is not the path she originally thought she would be on.

“I never really did it for money in the beginning,” Sundell said. “But now I can see it as a career.”

In Thailand, it is not unusual for fighters to compete at least monthly, so they are more likely to rack up a lot of fights in a short period of time than fighters in the Western world. Even as a teenager, Sundell’s skills and talent were so impressive that she captured the attention of ONE Championship. She made her promotional debut only two months ago. The main difference for her was the fact that ONE Muay Thai fights take place in their patented circle-shaped cage with the fighters using four-ounce MMA gloves. This was a new experience for Sundell and one she enjoyed.

“It was my first fight in small gloves in ONE championship,” said the Swede. “I never fought with small gloves before. It was fun, and it was easier to hit.”

For her ONE debut in February, Sundell took on Australia’s Diandra Martin. In the third round, Sundell stopped the elder fighter by knockout, and made a big statement to the world.

“I think it was a good first fight in ONE,” Sundell said. “She was very strong, and I learned that I have to block differently, like with my hands – not take so many shots.”

Sundell credits a lot of her success to her fighting style. And, it’s one that fans enjoy as well.

“I think I’m an aggressive fighter and always put pressure, so I think that’s exciting,” said the teenager.

Well, not only are fans impressed with what Sundell has shown so far, the ONE brass is impressed as well. In fact, they are so impressed that only two months after her debut, she will be fighting for the inaugural ONE strawweight Muay Thai title tomorrow night at the Singapore Indoor Stadium.

In the co-main event of ONE 156: Eersel vs. Sadikovic, Sundell will be facing California’s Jackie Buntan. Buntan made her pro debut with ONE in Feb. 2021, and she racked up three decision wins in just seven months. With both ladies sitting at the top of the strawweight heap, it only made sense to pit them against each other for the inaugural strap.

“I was very excited and very happy that they think that I could do it in ONE Championship,” said Sundell. “I know she’s good fighter – fast hands and good footwork.”

Sundell has come a very long way in a very short time. Many fighters don’t even make their amateur debuts until they are in their 20’s, and here she is fighting for a world championship at 17 years old. Not to mention, she lives alone in Thailand, and all of her friends are fellow athletes.

“All of my friends do Muay Thai,” said Sundell. “Actually, it’s like all my friends are at the gym. And I stay alone. Yeah, I clean and laundry, and I cook as well. I pay bills and stuff.”

It’s quite fascinating to imagine what life must be like for a Swedish teenager to live and train in a tropical location halfway around the globe. And, that’s exactly the life Sundell is living. She has one focus in life, and that is to be the best Muay Thai fighter in the world, and she has a lot of time on her side. Tomorrow night, she has a chance to turn that dream into a reality when she faces Buntan for the biggest opportunity of her career.

ONE 156 airs live on the ONE Championship website with the lead card starting at 5 a.m. ET, followed by the main card at 8:30 a.m. ET.