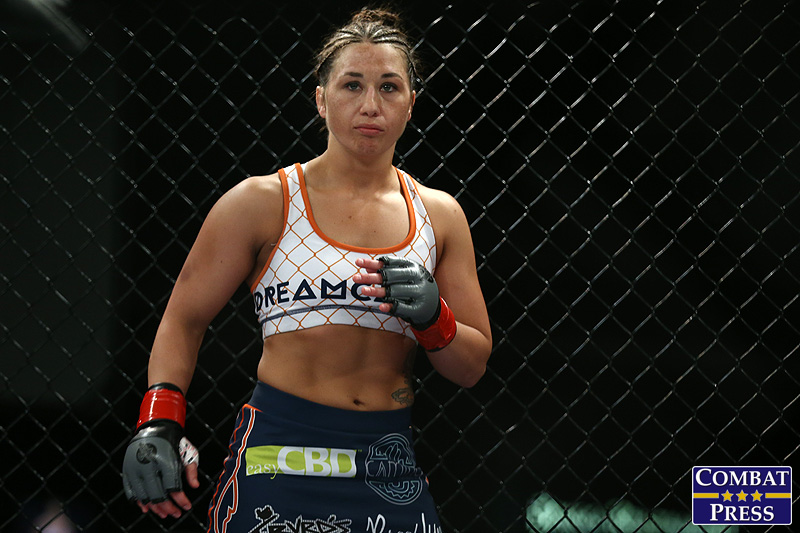 From a two-time U.S. national wrestling champion to a U.S. army sergeant to a professional MMA fighter, Sharon Jacobson has one of the most unique stories in the fighting game. With a wrestling pedigree as good as any woman in the sport, she has made a relatively smooth transition into mixed martial arts after only turning pro three years ago.

Jacobson, who fights out of Colorado Springs, Colo., is already fighting in one of the best organizations in the world. She’s a member of the Invicta Fighting Championships roster, and she will head into her seventh professional fight in January at Invicta FC 27.

“[The preparation] is going well,” Jacobson told Combat Press. “I’m training hard, and now it’s about focusing on everything and getting the weight down.”

The weight cut is nothing new to Jacobson, who comes from a strong wrestling background. She’s no stranger to hard work, either. In fact, Jacobson credits her previous experiences for making her as tough as she is currently.

“[The military training] helped my mentality a lot,” she admitted. “Going through all the training, I feel like it’s extremely important to have strong mentality.”

Jacobson’s MMA career did not start off as she had imagined it would. In her first fight, which came against DeAnna Bennett in 2014, Jacobson suffered a loss via rear-naked choke in the first round. However, it seemed like the fight was just motivation for Jacobson to get better. She went on a tear, winning her next four fights in dominant fashion, including her Invicta debut in 2015 against Delaney Owen, whom she edged via unanimous decision.

Soon, though, Jacobson ran into another wall. Earlier this year, she met Kali Robbins at Invicta FC 25 and lost by submission once again.

Jacobson’s bout in January pits her against Ashley Nichols, a 3-1 fighter who makes her Invicta debut following a strong run on the Canadian regional circuit. Nichols has won three straight, two of which ended in a first-round knockout.

“I know that she has a couple of titles in Muay Thai,” Jacobson said of her upcoming opponent. “But I respect all my opponents, that’s just how I am. Even if I am going in there and thinking ‘I’m going to destroy her, I always have respect for my opponent’s skills. It also helps to not get overconfident, because I feel like in my fight against DeAnna, I was doing well but got overconfident.

“My ground game is definitely better than her’s. I feel like I’ve been getting good on the feet as well, and I do feel like everything is coming together for me right now.”

While Jacobson may just be getting started in the game, she does eventually want to get to the UFC.

“That’s where I want to eventually end up,” she said. “Not that money is the most important thing, but that’s where you get paid great and competition is great, too. But I’d like to have the Invicta belt before I go.”

She may be quite new to the game, but Jacobson does not care. Her eyes are already fixed on the gold.

“Hopefully by this time next year, I’ll be fighting for the belt,” said Jacobson.

There’s only one path to that title, and Jacobson didn’t mince words.