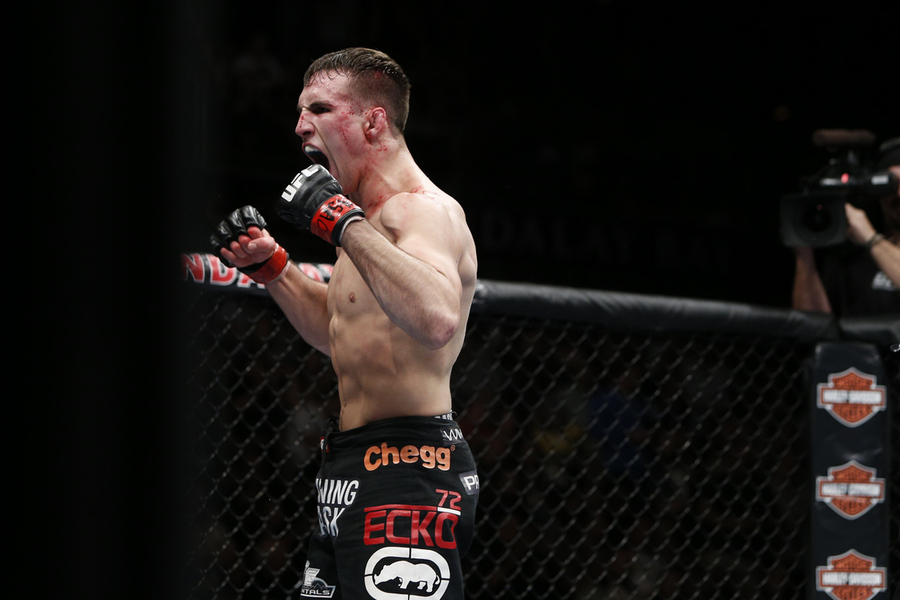 UFC’s Rory MacDonald: One Win Away From Living Up to the Hype

When it was announced that the UFC was awarding Rory MacDonald the winner of December’s welterweight title fight between Johny Hendricks and Robbie Lawler, the MMA community seemingly nodded in unison. Following MacDonald’s relatively one-sided fight with Tarec Saffiedine that ended in a third-round knockout for the Canadian last weekend, it was the logical move to give “Ares” the next shot at the belt. Since losing a title eliminator to Lawler in 2013, MacDonald has been on a tear that includes three wins over top-10 welterweights. After making his biggest statement in a long time with his stoppage of former Strikeforce champion Saffiedine, it’s pretty much impossible to make the case for MacDonald fighting in another title eliminator, let alone suggest anybody jump ahead of him in line for a title opportunity. After spending much of the last three years in the upper echelon of the division, MacDonald has finally earned the opportunity to win some gold. However, it’s going to take the best performance of his career to get past either one of the men he may fight for the belt.

MacDonald was viewed as a genuine five-star prospect from the moment he stepped into the UFC’s Octagon. Immediately coined as “The Next Georges St-Pierre” due to the fact that he was both Canadian and a welterweight, MacDonald quickly proved he could live up to the hype and compiled a 6-1 record to start his UFC career, earning wins over top names like B.J. Penn, Jake Ellenberger and Nate Diaz. The only loss “Ares” suffered during that stretch was a third-round TKO at the hand of Carlos Condit that came with mere seconds left in a fight where MacDonald had dominated the first two rounds. That impressive list of accomplishments is what made MacDonald the favorite heading into the title eliminator against Lawler, but they didn’t do anything to save “Ares” come fight time.

The UFC 167 co-main event between MacDonald and Lawler turned out to be a close fight on the scorecards, but ultimately two of the three judges and pretty much every major MMA outlet scored the fight for “Ruthless.” Lawler went on to fight for the interim belt against Hendricks, while MacDonald was sent tumbling back down the welterweight ladder and forced to pick up the pieces and work his way back to the top. After a slow first round in his next outing against Demian Maia, MacDonald came back strong. After sending Maia home with a unanimous decision loss, he went on to defeat Tyron Woodley and Saffiedine in back-to-back lopsided fights.

The biggest problem MacDonald is going to have against brawlers like Hendricks and Lawler lies in the fact that “Ares” is not a finisher. As impressive as MacDonald’s knockout over a talented striker like Saffiedine was, it was only his fourth stoppage win in almost a dozen UFC fights and his first in over two years. It’s obviously harder to finish top-level opponents, but MacDonald has relied on using his counter striking to accumulate points and avoid damage more and more often as his level of competition grows. MacDonald is a master at this strateg and he’s been able to use it perfectly more often than not, but it’s been in 15-minute fights, most of which haven’t come against anyone half as aggressive on the feet as Lawler or Hendricks. It’s a lot harder to stay at range and pick your shots over the course of 25 minutes without being hit, especially with either Lawler or Hendricks flying forward every few seconds with punches that feel like blows from a sledgehammer.

However, while Hendricks and Lawler present MacDonald with similar problems due to their aggressiveness, the way “Ares” should approach each fighter is drastically different.

If MacDonald were given his choice of opponents, it’s likely he’d opt for a rematch against Lawler. Despite most people agreeing with the judges’ verdict, we were treated to a very competitive 15 minutes the first time these two went toe-to-toe and it likely wouldn’t surprise anyone if a rematch went the other way. Lawler connected on only a few more significant strikes than MacDonald. On paper, at least, you could probably make the case for MacDonald winning the fight when his four successful takedowns are thrown into the mix. However, a significant strike landed by Lawler and a significant strike landed by MacDonald are two entirely different things, and it’s not hard to tell that Lawler’s punches were a bit more “significant” than those thrown by “Ares.” Lawler’s power sent MacDonald reeling on a couple of occasions during the match-up, and, more than anything, that’s what scored “Ruthless” the victory. It wouldn’t be too difficult for MacDonald and his head coach, Tristar’s Firas Zahabi, to find minor tweaks to make in MacDonald’s striking defense in order to reverse the outcome in a rematch.

A match-up against Hendricks could prove more difficult for the Canadian, if only because the takedowns he used to keep Lawler at bay would likely be a lot harder to come by against the current champion. Although Lawler’s wrestling defense has drastically improved over the years, he’s not a multiple-time NCAA champion and All-American wrestler out of Oklahoma State. It’s that wrestling background—along with incredible punching power—that made Hendricks so dangerous against MacDonald’s mentor, St-Pierre. Given the similarity in the styles implemented by GSP and MacDonald, “Big Rigg” will present many of the same problems for MacDonald.

If MacDonald can’t overcome the takedown defense of Hendricks, he may end up having to spend 25 minutes on the feet trying to avoid the champion’s ridiculous punching power. Although that may seem like an impossible task considering the number of times MacDonald was hit by Lawler in just a three-round fight, Hendricks isn’t as wildly aggressive as Lawler every time he steps into the cage. While he was just in a major brawl with Lawler in his last bout, Hendricks is actually more comparable to other wrestlers-turned-strikers, like Tyron Woodley and Jake Ellenberger, on the feet, and those are fighters MacDonald has beaten in the past. Against both of those previous opponents, MacDonald found his range on the feet almost immediately and started methodically landing jabs and crosses to frustrate his opposition and keep them on the outside. While you can’t be naïve enough to believe MacDonald would be able to escape from a fight with Hendricks as unscathed as he did when he defeated Woodley or Ellenberger, “Ares” has shut down similar fighters and it’s very possible he could do the same to the champion.

After the close war between Hendricks and Lawler in March, predicting an outcome for their December rematch is nearly impossible. But regardless of who leaves Las Vegas with the belt, MacDonald will see the toughest test of his career when he steps up to challenge that man. However, no matter if it’s Hendricks or Lawler strolling into enemy territory to try to retain the belt on Canadian soil, MacDonald will walk away with the UFC welterweight championship.

For five years now, the UFC fans have watched MacDonald grow from a blue-chip prospect to one of the top welterweights in the world, and the improvement on even just a fight-to-fight basis has been dramatic at times. In his last three fights, MacDonald has shut down a grappling specialist, an incredible athlete and wrestler with punching power, and a dangerous striker who is a former world champion. It seems like “Ares” has put everything together. He is finally the welterweight prodigy the fans have been waiting for him to become. All that’s left is for him to get his hands on the belt.