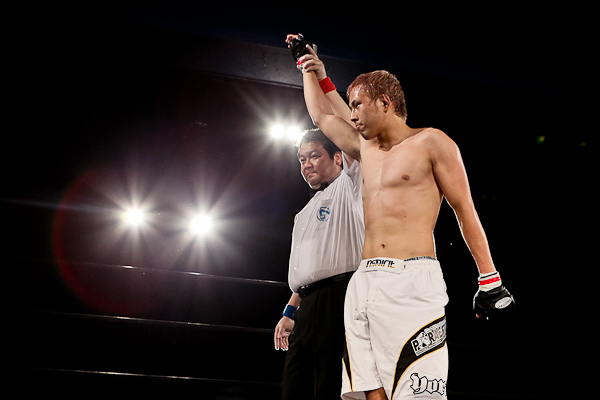 The South African Extreme Fighting Championship Worldwide promotion has produced a few top prospects already, including Demarte Pena, Igeu Kabesa and Dricus Du Plessis. It’s a bit too early to tell, but the company could have another burgeoning star on its hands in featherweight competitor Jay Cucciniello. The up-and-comer is undefeated through seven contests, and he’ll try to extend his streak to eight this weekend at EFC Worldwide 64, where he meets veteran Wesley Hawkey.

Unlike the aforementioned EFC stars, Cucciniello isn’t a homegrown talent. The 30-year-old hails from Britain and renewed his passion for MMA after a move to Spain. The Avaddon MMA fighter marched through five fighters on the British regional scene, stopping four via submission and one by way of strikes, before running into Declan Williams in a Contenders Norwich bantamweight title fight. In a hard-fought battle, Williams edged Cucciniello to snag the title, but the outcome was later changed to a no-contest and Cucciniello was once again an undefeated pro fighter. This is when he made his move to the Spanish regional scene, where he destroyed veterans Victor Marinho and Daniel Requeijo with strikes en route to the Ansgar Fighting League featherweight throne.

Hawkey, on the other hand, is a homegrown star of the EFC Worldwide roster. The 31-year-old fought on the regional circuit in South Africa beginning in 2010 and amassed a 4-2 mark before making his EFC debut. Under the promotion’s banner, Hawkey quickly earned a shot at the aforementioned Pena for the league’s featherweight crown. Hawkey was submitted by Pena. Hawkey scored a rebound win in his next outing, but he then tumbled through two losses before regaining his footing and winning three straight to claim another title bid. Once again, Hawkey came up short, this time suffering a first-round submission loss at the hands of Boyd Allen, who had submitted Hawkey once before. Since his second failed EFC title challenge, Hawkey has gone a mere 3-2 with two more submission defeats. “The Young Assassin” has four knockout wins and six submissions, but he has also suffered all eight of his losses via submission.

This really is a tougher fight than it might first appear on paper. Cucciniello is technically undefeated, but the aforementioned Williams was able to outpoint him on the feet and score a takedown en route to a decision nod that was later overturned. Hawkey is capable of implementing a similar game plan. Furthermore, the South African veteran has a very aggressive submission attack when the fight hits the mat. Of course, Hawkey often makes mistakes that lead to submission losses, but Cucciniello can’t exactly be expected to run away with this fight if it turns into a grappling match.

Hawkey’s recent losses are troubling. While it could be argued that losses to the aforementioned Pena and Allen, plus Azi Thomas, Alain Ilunga, Francois Groenewald and even Ryan van Niekerk, were losses to solid competition, his submission defeat at the hands of Sizwe Mnikathi is not quite as defensible. Thomas, Hawkey’s most recent foe, was able to tap the South African in just over three minutes. Worse yet, Mnikathi made Hawkey his only victory in the past seven fights. Mnikathi suffered losses to fighters with 1-3 and 1-4 records after submitting Hawkey.

So, while Hawkey’s veteran savvy, aggressive ground game and solid striking could lead him to victory, the nod still has to go to Cucciniello for his consistent winning ways and his own finishing abilities. While Hawkey sometimes struggles to find the win column, Cucciniello hung in there with veterans in his last three fights and won two of them via strikes (the other bout was the no-contest against Williams). Hawkey will be a constant threat in this fight, and a win for the vet wouldn’t be a shock at all, but the smart call is Cucciniello by way of submission.

For its 290th event, Pancrase is parading out such notable names at Hatsu Hioki, Hiroyuki Takaya, Akihiro Gono, Shunichi Shimizu and Atsushi Yamamoto. Yet, there’s also an undefeated up-and-comer who deserves some attention. Bantamweight Arthur Soares is perfect through his first seven professional outings, and he’ll try to make it eight straight when he clashes with Kenta Sakuma in Japan.

Soares is getting his first big chance after floating around the smaller regional promotions in Brazil since he debuted in 2013. The Brazilian scored knockouts in his first five outings and then tacked on a submission victory when he fought under the Watch Out Combat Show banner in early 2017. He added another knockout finish in his most recent fight in May. “Cara de Sono” is a member of the Careca MMA Team. In 2016, Soares captured the Gladiator MMA inaugural flyweight title. He’s spent much of his young career bouncing between the 125- and 135-pound divisions while finding success in both weight classes.

The 30-year-old Sakuma has toured through many of the mid-majors in Japan. He launched his pro career under the Deep banner in 2010 and moved to Shooto the following year. By 2013, he was jumping back and forth between Shooto and Heat before eventually landing in Pancrase in 2016 after a nearly two-year absence from active competition. He’s been on the Pancrase roster ever since, and he’s been perfect through his first three outings with the promotion. The Paraestra Kashiwa export has faced a wide variety of competition, but the most notable names on his resume include Hidekazu Fukushima (twice), Makoto Kamaya and Fumihiro Kitahara. Early in his career, he suffered losses to Yuki Baba and Kenji Yamamoto, both of whom have gone on to compile mediocre records. More recently, he fell victim to a submission at the hands of .500 fighter Keita Ishibashi. Sakuma has scored five knockouts and one submission victory.

The beauty of this fight is its potential for a big knockout finish. Soares packs plenty of power, but Sakuma has a willingness to stand and bang as well. Much like in the EFC Worldwide pairing previewed above, this duo features an undefeated fighter who hasn’t been tested by many opponents and a veteran fighter with plenty of unrealized potential and a few defeats against subpar competition. Just as in that other bout, it’s the perfect record that proves to be the most persuasive element on paper.

Unlike the other contest, however, the veteran here should come out with the victory. Soares has been great in Brazil, but he’s traveling all the way to Japan to fight a journeyman veteran of just about every noteworthy Japanese organization. Sakuma might not be a champion in the making, but he has what it takes to give Soares a tough fight and win over the local judges. Sakuma will take a close decision in this one.

Two events in one weekend? Yep, Fight Nights Global is keeping busy. After hosting its 75th event in St. Petersburg on Friday, the promotion touches down in Krasnodar on Sunday for its 76th show. It’s all about the flyweights at this one. The top-billed fight is a showdown between veterans Ali Bagautinov and Danny Martinez. Before they clash, though, FNG will crown a flyweight champion when Tagir Ulanbekov collides with Vartan Asatryan.

Ulanbekov is the undefeated fighter in this affair. He debuted in 2013 and submitted his first three adversaries. He finally went the distance when he stepped up to meet more seasoned competition in the form of Shyngys Kairanov, but he still emerged victorious. His next two fights also came against high-level opponents from the FNG roster, and Ulanbekov scored a submission via strikes and a unanimous decision in those outings. The flyweight upstart is a Master of Sport in combat sambo and holds a world championship in that discipline.

Asatryan didn’t get off to the best start when he debuted in 2011. He lost his first three pro fights and five of his first six. It all finally started to come together for “Corsair” in 2014, when he kicked off a six-fight winning streak that included five stoppages. After another two-fight skid in 2015, the Ermak fighter rebounded to go on another six fight run. He advanced through the FNG flyweight tournament to land his spot in this title affair. The 24-year-old is also a veteran of the Tech-Krep organization, where he also won a flyweight tournament. The Muay Thai stylist has posted four knockout finishes and five submissions, but he has also suffered three submission defeats and a knockout loss.

The theme of this week’s previewed bouts is obviously about putting an unproven, unbeaten prospect against a veteran with just enough of a background and record to pose a significant threat to the up-and-comer. Asatryan fits that bill perfectly. He has met and defeated the likes of Ruslan Belikov, Mikael Silander, Elnar Ibragimov and Zhalgas Zhumagalov, who held a combined mark of 42-12-1 when they met Asatryan. However, he’s also lost to Asulan Toktarbaev and Vitali Branchuk, who sported a combined 29-8 record when they clashed with him. Many of Asatryan’s losses came early in his career, too, so it’s reasonable to assume that he’s made the necessary adjustments to overcome more difficult foes.

The problem for Asatryan in this match-up is that he’s not just facing any regional foe. Instead, he’s fighting a world champion in the art of combat sambo. That doesn’t guarantee Ulanbekov a cake walk to the victory here, but it sure doesn’t hurt his chances. Ulanbekov is starting to put together a solid run, and a win over Asatryan will prove that he’s ready for the next step. Asatryan is looking for the longest winning streak of his career, but he won’t find it. Ulanbekov’s submission game will be too much for the veteran.