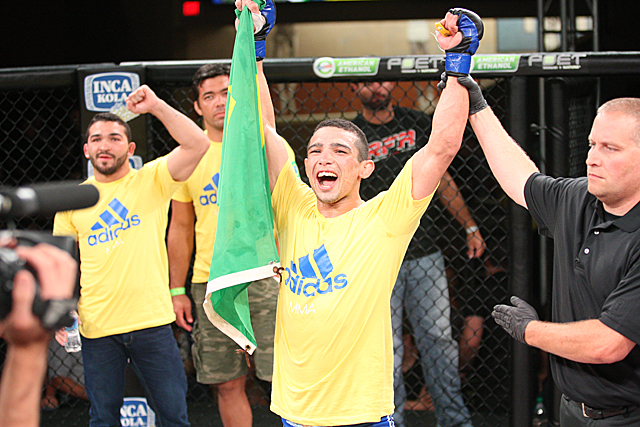 It’s been a long time since Cage Warriors has put on a show. In fact, the company’s last numbered event was held in 2014. Now under the leadership of CEO Graham Boylan, the promotion is back in 2016 for its 75th offering. The lineup includes a middleweight title tilt between Jack Hermansson and Alan Carlos that tops the bill, but it’s the featherweight showdown between Paddy Pimblett and Ashleigh Grimshaw that gets the spotlight here.

Grimshaw is among the most seasoned of British veterans. The 34-year-old kicked off his pro career in 2003, but he has failed to find any consistency in more than a decade of action. “The Thunderball Kid” boasts victories over the likes of UFC veterans Phil Harris and Vaughan Lee and The Ultimate Fighter alum Paul McVeigh, whom Grimshaw defeated in his pro debut. Meanwhile, he has suffered losses to such mediocre competition as the sub-.500 Frederic Fernandez and the near-.500 David Lee. The Team Titan and Legacy BJJ fighter has also locked horns with established veterans like Ronnie Mann, Mick Sinclair and Graham Turner in losing efforts. Grimshaw is a finisher who has stopped eight opponents with strikes and seven foes via submission. He has had a rough time securing fights lately and has only competed once since the end of 2014.

Pimblett is the up-and-coming youngster in this bout. Checking in at just 21 years old, “The Baddie” already has 10 fights under his belt as a pro. He made his debut in 2012 and won his first four fights before stumbling against Cameron Else in a 35-second submission loss. The Next Generation MMA Liverpool product responded to the loss by capturing five straight wins while stepping up to face more experienced competition. Pimblett has finished two fights via TKO and scored one submission due to strikes, but chokes account for the majority of his victories. He holds the featherweight title in the Full Contact Contender promotion and has made one successful defense of the belt.

The young Pimblett can use length to his advantage on the feet in order to connect with strikes, especially his kicks, but his stand-up looks stiff and awkward. His real gift is the submission game — just ask Conrad Hayes, the victim of a slick flying triangle submission at Cage Warriors 68. Opponents obviously aren’t safe in the clinch, and they can find themselves in quick trouble if they score the takedown or land on their back off a Pimblett takedown.

Grimshaw will need to keep the fight on the feet and stay at distance. He has scored plenty of knockouts in his career, and Pimblett’s style could leave his chin exposed for Grimshaw to land a fight-ending blow. If Grimshaw can’t keep distance, then he’s in for a difficult night. As soon as Pimblett locks up with Grimshaw, the submission attempts will come in succession. Grimshaw simply isn’t good enough to avoid all of the holds. Grimshaw has been submitted twice via choke. Pimblett happens to love chokes. This all adds up to a submission win for Pimblett.

It’s no secret that the battle for a Resurrection Fighting Alliance title is truly more of a battle for a spot on the UFC roster. That fact has echoed through countless editions of this column, and it can be said once again for RFA’s 37th event. The lineup features a clash of light heavyweight title hopefuls Rafael Viana and Devin Clark, but the pair lack the experience typically associated with a UFC signee. The co-headliner, a battle between Leandro Higo and Joey Miolla for the vacant bantamweight crown, doesn’t share this same concern.

Higo, who enters the bout with twice as much experience as his opponent, is the favorite. The 27-year-old spent nearly two years on the sidelines for a variety of reasons while watching four scheduled fights get scrapped. He returned to action in 2015 and made his promotional debut with the RFA with a win over Terrion Ware. Less than three months later, he handed Melvin Blumer a loss to move his mark to 2-0 under the RFA banner. The Pitbull Brothers fighter, who has also worked with Team Nogueira, debuted in 2006 and compiled a 14-2 record before his hiatus. He has won nine fights via submission and three by way of strikes.

The 31-year-old Miolla has jumped between the featherweight and bantamweight divisions while also making one stop at a catchweight of 150 pounds. After a strong run as an amateur, “The Beast” lost his pro debut in 2012. He rebounded with eight straight wins. The Power MMA representative had a successful stint in King of the Cage, where he picked up three of his victories. He has also fought under the World Series of Fighting banner, where he claimed a second-round knockout win over Randy Steinke. He has already notched one victory inside the RFA cage. Four of Miolla’s win have come by way of strikes, while the remaining four made it to the scorecards.

Miolla can be a major threat to Higo on the feet, but the Brazilian is no slouch in the stand-up department. Higo is far better on the mat, however. The Brazilian is also a strong wrestler, which is not something that’s seen too often in Brazilian grapplers. He can utilize various techniques to get the fight to the mat, including pure power in picking his opponent up and slamming him to the ground. Higo’s improving stand-up has also allowed him to set up his takedown attempts with strikes.

Higo has a lot of quality experience against UFC-caliber competition, which is another asset in this fight. Miolla has seen tougher competition in his three most recent outings, but he’s taking another step up in this fight with Higo. The Brazilian is a handful if he can get his opponent to the canvas, and he’s well rounded enough to keep Miolla honest. Higo will emerge with the submission win and the belt in this contest.

After combining with Bellator for its launch and then hosting a two-day event to close out 2015, Nobuyuki Sakakibara and the Rizin Fighting Federation are back for the promotion’s first numbered event. The lineup isn’t quite as spectacular as the lineup of the New Year’s event, but there are some notable veterans set to take to the ring for Rizin Fighting Federation 1. Kazuyuki Fujita is the one name that should ring bells for any Pride fans out there. Fujita was a heavyweight mainstay in the organization. Now, following a two-year hiatus from active pro MMA competition, the 45-year-old is back. Fujita will headline the show opposite the far lesser-known Jiří Procházka.

Fujita made his pro debut in the year 2000 with the Pride organization. “Ironhead” went on to record wins over Mark Kerr, Ken Shamrock, Gilbert Yvel and James Thompson while fighting for the organization, but he’s better known for his losses to the likes of Mark Coleman, Mirko “Cro Cop” Filipovic, Fedor Emelianenko and Wanderlei Silva. After Pride shuttered its doors, he moved on to Sengoku, where he picked up his most recent victory in 2008. He lost his subsequent three fights, including contests against Blagoi Ivanov and Alistair Overeem, before taking a four-year hiatus from the sport. Fujita returned briefly in 2013, but he was on the losing end of a decision against Satoshi Ishii. He appeared at Inoki Bom-Ba-Ye 2015 in a wrestling bout, but this headlining contest against Procházka is his first MMA-rules outing since his loss to Ishii.

Procházka is truly a light heavyweight, but he’ll compete in this bout as a heavyweight (the official weight limit tops these fighters off at 243 pounds). The Czech fighter made his pro debut in 2012 and compiled a 13-2-1 mark before making his Rizin debut. Along the way, Procházka scored a TKO finish of his most notable foe, Michał Fijałka. Procházka first appeared in the Rizin ring on the first day of the New Year’s event. He finished the aforementioned Ishii with knees to advance in the light heavyweight grand prix. On the event’s second day, Procházka added a TKO victory over Vadim Nemkov to advance to the tournament final opposite Muhammad “King Mo” Lawal. The Czech fighter didn’t fare so well against the Strikeforce veteran, who destroyed Procházka in the first round.

Fujita is a tough veteran with a solid head, literally, but he did succumb to striking finishes in two of his last five pro bouts and managed just a 2-6 mark through his final eight fights. He’s a star in Japan, which explains his high placement on a card run by Pride’s former head, but he’s far into his decline and hasn’t been active enough to present evidence that he can stand up to a stiff test.

Procházka faded by the time he got to the finals against Lawal, but he turned in strong showings in his previous fights. Size is the one caveat in this contest. It’ll be interesting to see if Procházka can handle the larger Fujita. Still, as a fighter still in his prime years, Procházka has to be given the benefit of the doubt against a man in his mid-40s. Procházka will finish Fujita, but he’d be wise to move back to the light heavyweight division when it’s time for him to face a more serious threat.