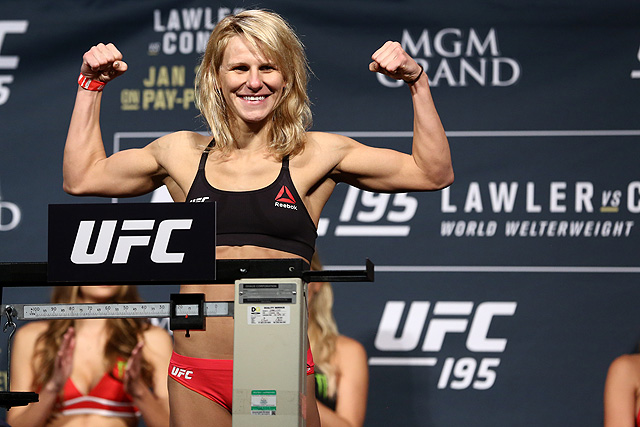 Heading into her fight at UFC Fight Night 112, Justine Kish is finally getting an opponent she has been eyeing for quite some time. Kish will take on Felice Herrig on Sunday, June 25, in Oklahoma City. The bout airs live on Fox Sports 1 and features two strawweights on the rise.

After dropping a fight to Paige VanZant in 2015, Herrig returned to the Octagon with a vengeance and has since posted back-to-back wins against Kailin Curran and Alexa Grasso. These victories have catapulted Herrig to the No. 13 spot in the UFC’s rankings.

Meanwhile, Kish, who is 6-0 in her career, has won her first two UFC bouts against Nina Ansaroff and Ashley Yoder. Both fights went to the scorecards. Kish has always had her sights set on fighting Herrig. It’s a fight Kish believes she can win.

“I’ve been asking for a while now to have this fight,” Kish told ChicagoLandSportsRadio.com. “I’ve been saying, ‘I can beat her. I can beat her. Please give me a chance.’ I met her on [The Ultimate Fighter 20] and we ended up being on the same team. People have said that there are a lot of similarities between us, so I wanted this fight to separate myself from her.”

Kish knows she’s underrated and overlooked going into the fight, but that just adds more fuel to her fire. In her last two wins, Herrig has been given young, up-and-coming talent to fight against, and the trend will continue against Kish, 29, who is still new blood in the UFC.

Kish, a Muay Thai specialist, likes to change up her training camp to throw off her opponents. She’s taken a similar approach for the fight against Herrig, an experienced ground-game specialist. Kish believes a win over Herrig will finally open the eyes of those watching.

“I hope it’ll propel me to have a closer shot at the belt,” said Kish. “Maybe it’ll give me more exposure. People will see I’m not just some troll from a dark corner. I just really hope this gets me the exposure and people say, ‘Oh, this is the girl who is going to be fighting for the belt.’”

After two decision wins, Kish is looking for an aggressive finish against Herrig.

When Kish steps into the Octagon against Herrig at UFC Fight Night 112, she’ll be looking to make a statement for her title pursuit while stopping the momentum of her ranked opponent. She wants to separate herself from a veteran of the sport. Kish is focused on not only capturing the eyes of fans, but also surprising those watching as she looks to make a jump into the top 15. At strawweight.