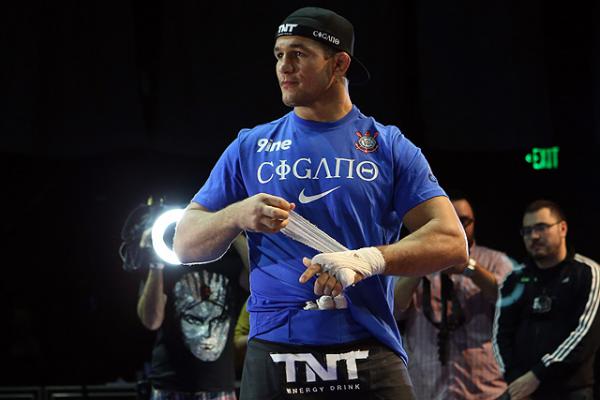 You know how, every now and then, an unknown fighter will appear on the MMA scene and have an incredible UFC debut, which helps them with an eventual meteoric rise up in the ranks? That’s exactly what happened to a Brazilian prospect named Junior dos Santos all the way back in 2008 at UFC 90.

Almost nine years ago, dos Santos, a product of the legendary Nogueira brothers, took on Fabricio Werdum, a bit of a legend in his own right. His status as an underdog was ridiculous at the time. However, not only did dos Santos impress everyone, but he did it so incredibly quickly by knocking out Werdum with a vicious uppercut, followed by strikes on the ground.

Fans were blown away by the 24-year-old’s ability to put a championship contender who had previously fought in multiple high-level fight organizations, including Jungle Fight and Pride. Werdum had won two out of three fights, with back-to-back finishes, prior to his loss to dos Santos. Dos Santos actually knocked Werdum right off the UFC roster.

Dos Santos followed his win over Werdum by going on an absolute tear. He won eight fights in a row, including six via knockout or technical knockout. This included his heavyweight title victory over champion Cain Velasquez.

After he defeated Velasquez the first time, dos Santos faced the American Kickboxing Academy product in two of his next four fights. He lost both rematches in devastating fashion. He was lit up on the feet. His opponent, Velasquez, was forced to beat him mercilessly. The one thing both fights demonstrated was the heart and chin of the former champion, who took a ton of punishment. His face showed it, too.

After the Brazilian’s second loss to Velazquez, he went on to win two of his next three bouts, where he took much more of a methodical approach to his striking style. He picked his opponents, future UFC champ Stipe Miocic and contender Ben Rothwell, apart. Aside from his one loss to Alistair Overeem via knockout, dos Santos claimed two unanimous decisions. Fittingly, one of those close wins was over Miocic, whom dos Santos will be meet in a highly anticipated grudge match at UFC 211 in Dallas on May 13.

Does the former champion, who seemed unstoppable in the prime of his career just a few years ago, have what it takes to capture UFC gold again?

That’s a tough question to answer. The heavyweight division isn’t exactly the toughest one out there at the moment. The one thing you can definitely count on is a slugfest, where two men way above 205 pounds are bound to connect on the chin multiple times, leading to some highly anticipated drama.

Something should be put into consideration, though. Dos Santos did win their first fight, and it was a close one. It could have gone either way, but the Brazilian managed to pull it off. We shouldn’t expect anything different than two guys throwing leather.

Another factor that should be considered is the possibility of the fight going to the ground. Both guys are good grapplers. Miocic has great wrestling skills, whereas dos Santos has been trained by the Nogueira brothers, who are well-versed in jiu-jitsu. Dos Santos is also a teammate of the great Anderson “The Spider” Silva, so he has plenty of experience with big names to use in big fights.

The big concern has to be the Brazilian’s cardio. He has tended to fade in fights, which appears to be an issue for a lot of talented Brazilian fighters, let alone huge heavyweights who have to carry around all that weight. Dos Santos definitely needs to work on preserving his energy for the later rounds against Miocic.

This will be a great fight. Even though they hit like tanks, it’s going to take a lot to put either of these giants to sleep.