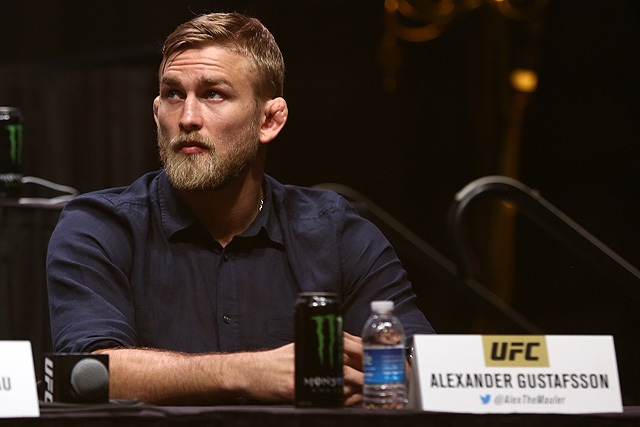 On Sunday morning, Alexander Gustafsson will find himself in familiar territory. “The Mauler” will not only be featured in yet another high-profile fight in the UFC light heavyweight division, but he will also be surrounded by a sea of his countrymen.

Gustafsson, who faces former title challenger Glover Teixeira in Sunday’s main event at UFC Fight Night 109 in Stockholm, Sweden, comes into the bout after yet another extended layoff. He last competed in September, which was 11 months after his loss to current champion Daniel Cormier. The layoff seemed to be good for the former title challenger, who took home a unanimous decision victory over Jan Błachowicz. Although Gustafsson looks to still be among the best 205-pound fighters in the world, there’s a dark cloud hanging over the towering Swede.

This cloud has followed Gustafsson from the last time he competed in front of his countrymen. After bouncing back from his incredible showing in a loss to Jon Jones, “The Mauler” was on the cusp of yet another title shot entering UFC on Fox 14 in Sweden. To capture the chance at another title fight in front of his fellow Swedes would’ve proved to be a momentous occasion. The only thing standing in his way was the formidable Anthony “Rumble” Johnson. Johnson, who had returned to the UFC after rebuilding his career in the World Series of Fighting, looked like an unstoppable force as steamrolled through Phil Davis and Antonio Rogerio Nogueira. Still, Gustafsson appeared to have a skill set that could counter the swarming attack of Rumble. He was tall, had good footwork and could land a surprising takedown to keep his opponent honest. It was a marquee match-up of two of the best light heavyweights on the UFC’s roster.

Instead of an instant classic, MMA fans witnessed a heartbreaking series of events for Gustafsson. Just over two minutes into the fray, he attempted to land a front kick, but Johnson countered with a heavy punch — or headbutt, depending on who you ask — and quickly pounced on his wounded prey. The end result was not only painful in that Gustafsson ate some strikes from the division’s hardest hitter, but also because Gustafsson was visibly shaken by the loss in front of his countrymen. The defeat put Gustafsson on the sidelines for an extended period of time. Fans wondered if “The Mauler” would ever return.

We found our answer in September, when the Swede topped Błachowicz, but now Gustafsson faces a similar challenge of competing in yet another headlining affair in Stockholm. The fight with Teixeira isn’t drawing the same amount of attention as Gustafsson’s fight with Rumble did, but it is still a main event that requires more media duties and more pressure on the shoulders of Gustafsson. The fight with Teixeira is certainly a winnable one for the Swede, but what happens if Gustafsson loses in Stockholm again? Will the loss hurt just as much as the loss to Rumble? Will it hurt more? It’s tough to predict how a fighter’s mentality will be affected. A fighter’s mental game can sometimes be affected by outside circumstances, and this applies to even the most elite athletes in the world.

Gustafsson has shown plenty of mental toughness in the past, so history is definitely on his side. The fights with Jones and Cormier showed that Gustafsson could respond to adversity in typical fighter fashion. The win against Błachowicz showed that he could overcome an extremely emotional defeat. Fans should feel confident that if he suffers a setback against Teixeira, it won’t be the final time we see “The Mauler” inside the cage.

Of course, Gustafsson needs to avoid a loss beyond simply coming up short in a main event in Sweden. Despite holding a place among the best light heavyweights in the world, Gustafsson is just 2-2 since the loss to Jones. Granted, those losses were to a pair of elite 205-pounders, but with a fresh crop of light heavyweights on the rise, time is of the essence for the former title challenger.

An impressive showing against a top contender with a raucous crowd cheering him on would likely be enough to propel Gustafsson back into title contention. Jimi Manuwa is waiting in the wings for the post DC/Jones saga. This leaves Gustafsson as the next man up. The UFC could choose to put Manuwa and Gustafsson in a rematch, but it seems unlikely considering the UFC needs all the title challengers it can get.

In the middle of his athletic prime, the 30-year-old Gustafsson isn’t in must-win territory yet, but he can ill afford a loss to Teixeira. The Rumble fight was two years ago. Perhaps Gustafsson has learned how to better handle the pressure. If so, then Teixeira could be in for a long night. If not, then we could witness another emotional setback in the battle-tested career of “The Mauler.” Either way, the Gustafsson/Teixeira bout features a number of storylines from just the Gustafsson side alone. On Sunday morning, we’ll see how the next chapter turns out.