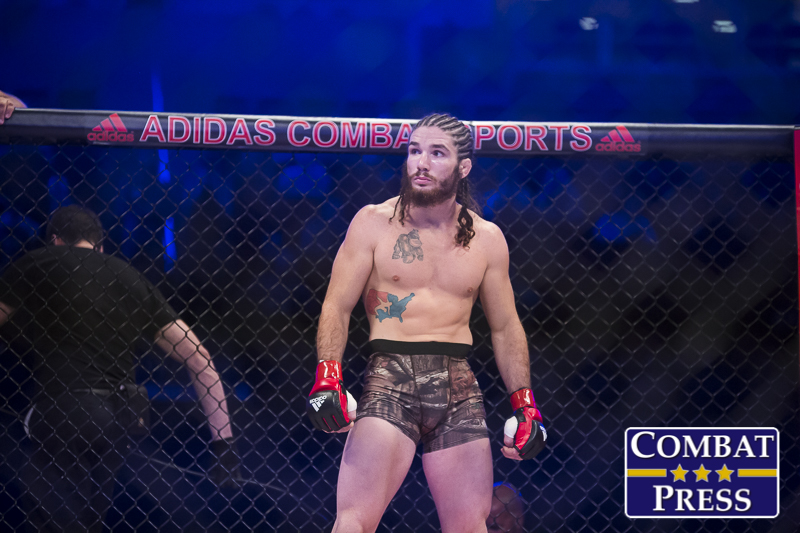 The last four Legacy Fighting Alliance events have featured a collective total of one title fight. LFA’s 23rd venture will feature two belts on the line in a single night, and a fairly stacked card overall. Andrea Lee puts her women’s flyweight title on the line against Jamie Thorton, light heavyweight prospects Ryan Spann and Lemarcus Tucker clash, and someone will suffer their first pro defeat when Brandon Shavers and Bryan Billiot meet. However, it’s the headliner that grabs our attention. The welterweight title will be on the line when champion Derrick Krantz meets undefeated challenger James Nakashima.

Krantz, 29, is a true veteran who will be entering into his 30th pro contest this weekend. “D-Rock” snagged the vacant LFA welterweight title in his last outing when he stopped Ben Neumann in the second round via strikes. It’s hardly the first time Krantz has been involved in a championship affair. After making his pro debut in 2008 and racking up a 14-6 mark by 2013, Krantz challenged for the Legacy Fighting Championship lightweight strap. Krantz came up short in that title bid when he was submitted by fellow title hopeful Jorge Patino. In 2015, Krantz topped UFC veteran Brock Larson for Legacy’s vacant welterweight title, but he relinquished the belt in his very first defense when he was submitted by Alex Morono. Krantz, a streetfighter who found MMA, battled his way back into this title bout with wins over Dave Burrow and Hayward Charles. The Team 515 product has 11 submission victories and eight wins by some form of knockout. He’s also suffered five submission defeats and two knockout losses.

The 28-year-old Nakashima has been perfect since debuting as a pro in early 2015. He was a Resurrection Fighting Alliance mainstay before the RFA merged with Legacy FC to form the LFA. By his fourth pro outing, which came at RFA 30, Nakashima was handing out a loss to the formerly undefeated Chance Rencountre. He took away Brad Darrington’s unblemished mark at RFA 35. In his two most recent fights, Nakashima has decisioned established fighters Dez Hill and LaRue Burley. Every one of Nakashima’s fights has gone the distance. The MMA Lab fighter has a strong wrestling background and was a teammate of one of the best college wrestlers of the last decade, Jordan Burroughs.

Krantz is the perfect next step for Nakashima. The 29-fight veteran has faced some tough competition throughout his career. In addition to Patino and Morono, he has dropped fights to the likes of Todd Moore, Rich Clementi, Dustin Poirier, Brian Melancon, Sean Spencer, Andrey Koreshkov and Derek Campos. He’s also the reigning welterweight champion for the LFA, which means that Nakashima gains gold with a win and also stands a chance of being plucked by the UFC.

Nakashima has a great pedigree. He trains alongside the likes of Benson Henderson and Efrain Escudero while working under the watchful eye of John Crouch. He has wrestled in the NCAA national championship tournament and captured an NJCAA championship. Nakashima’s ability to grind out victories has led him to plenty of scorecards, but he’s been very effective inside the cage.

Krantz, meanwhile, is a mid-tier veteran. He’s the gatekeeper that Nakashima will have to defeat if he wants to get to the big show. Krantz’s street-fighter background means he’s likely not equipped to tangle with Nakashima’s high-level wrestling. Krantz could be tricky on the ground, where he has displayed his submission skills, but Nakashima will avoid the submissions and use a wrestling-heavy game plan to capture yet another judges’ nod.

Until recently, Brandon Halsey was a staple of the Bellator MMA roster. Now, however, he heads to Russia for a headlining spot on the 83rd edition of the M-1 Challenge series. Halsey’s opponent in the light heavyweight contest will be Russia’s very own cat-loving up-and-comer, Mikhail Ragozin.

The 31-year-old Halsey is almost synonymous with Bellator MMA. The “Bull” only had two pro fights, including a decision win over UFC vet Shonie Carter, when he was scooped up by Bellator in 2013. The NCAA Division I All-American and high school CIF state champion wrestler made his promotional debut as a light heavyweight at Bellator 92, where he submitted Rocky Ramirez on the prelim card. He added three more wins, the third of which came in his new home at middleweight, under the Bellator banner during the prelims. Halsey was then promoted to the main card, where he submitted Brett Cooper to win a middleweight tournament and stake his claim to a title shot. That shot came at Bellator 126, where the former light heavyweight claimed the middleweight title with a stunning 35-second submission finish of longtime champ Alexander Shlemenko. Halsey was set to defend his title against Kendall Grove, but he came in heavy for the fight. Ultimately, he was forced to vacate the belt despite a win over Grove. He lost a fight for the vacant title to Rafael Carvalho. Halsey returned to the Bellator cage for one additional fight, a submission loss to John Salter. The HB Ultimate Training Center export moved to the M-1 organization in 2017 and lost to Shlemenko in a rematch in June. Shlemenko finished Halsey with strikes in a mere 25 seconds.

Ragozin is a far lesser-known name, but the 25-year-old has put together a respectable resume since debuting in 2014. He lost his pro debut to Magomed Ankalaev, but rebounded with five straight stoppage wins and six straight victories overall. Ragozin then suffered a 69-second knockout loss to Wallyson Carvalho. He responded by scoring technical knockout finishes in his two most recent fights. Overall, Ragozin has four finishes via strikes and three submission wins.

Halsey has fallen on some really hard times. He has lost his last three fights, but his defeats came courtesy of the current Bellator middleweight champ, a UFC veteran and a former Bellator middleweight titleholder. That’s not too shabby. Halsey did find success at 185 pounds, but he’ll move back up to light heavyweight for this contest. It could be a good way for the Bellator vet to hit the reset button.

Ragozin isn’t exactly the best Russia has to offer. He was knocked out by the middling Wallyson Carvalho and dropped his pro debut to an unknown fighter. Halsey needs a sacrificial lamb of an opponent, and Ragozin would seem to be it.

Given Halsey’s recent struggles, Ragozin can’t be counted out. The Russian can finish fights, so one miscue by Halsey could be all it takes for the Bellator vet to land himself in a four-fight skid. However, Halsey’s combination of power, grappling and wrestling should leave Ragozin with few chances to implement his own game. Halsey might take a conservative approach after his recent losses, so expect this fight to go the distance before Halsey has his hand raised.

Naurdiev has posted an impressive 15-1 mark through his first 16 pro outings. Even more head-turning is the fact that the stud fighter is only 21 years old. The Russian-born, Austrian-based competitor debuted in 2012 and won his first four fights before suffering a 40-second submission loss to debuting pro Cem Kaya. Naurdiev has righted the ship to the tune of 11 straight victories. Along the way, he has never gone the distance. His signature win came in his most recent ACB outing when he put away UFC veteran Benny Alloway with a kick in the first round. Naurdiev has finished nine opponents by way of strikes while submitting an additional three foes.

The 37-year-old de Jesus has been toiling around the Brazilian regional scene since 2007. He lost two of his first three fights, but his one victory in this stretch came against UFC and Strikeforce veteran Guto Inocente. He recovered and went 6-0-1 over his next seven fights before he stumbled again. His four subsequent losses have come against UFC vets Caio Magalhães and Albert Tumenov, Bitetti Combat champ Marcus Vinicius and unheralded Brazilian veteran Marcão Santana. “Marmota” has topped several Brazilian regional circuit regulars, but he has yet to add a truly notable victory to his record. De Jesus appeared on The Ultimate Fighter: Brazil 3, where he defeated Pedro Paulino before losing to Warlley Alves via knockout.

Naurdiev is a rising prospect, but his victory over Alloway was his first true test. He needs tougher competition, but it’s not a certainty that de Jesus represents a step up. After all, the TUF Brazil 3 alum was destroyed by Alves during the reality show and has not won more than three fights in a row since 2011.

Tumenov needed just 46 seconds to separate de Jesus from consciousness. Naurdiev is accustomed to making quick work of opponents. The youngster has first-round knockout finishes in his two most recent bouts and posted stoppages of 75 and 40 seconds earlier in his career. This is one of those don’t-blink-or-you’ll-miss-it affairs. Naurdiev should steamroll de Jesus en route to another early knockout finish.