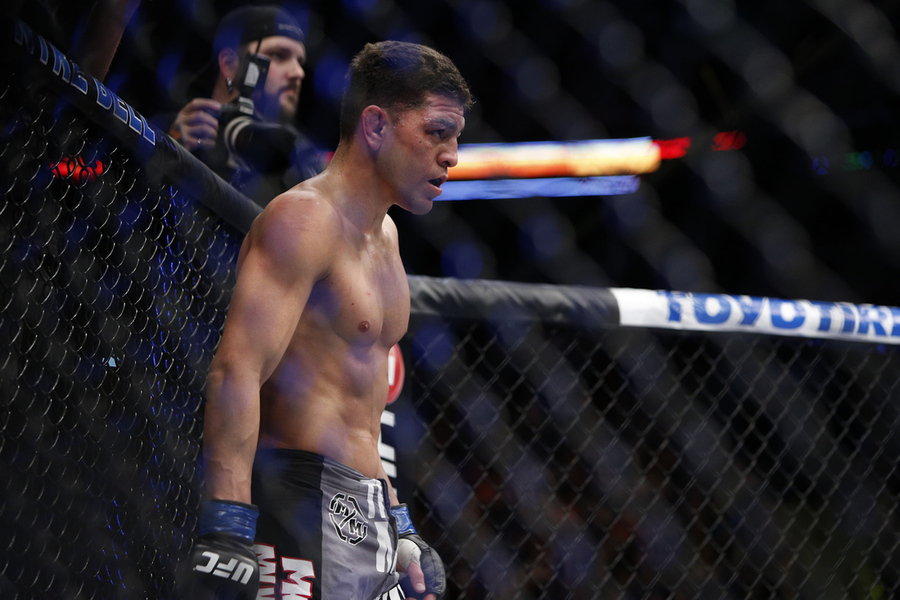 Nick Diaz Beating Anderson Silva Would Be Good for the UFC

UFC 183 is still three months away, but that’s not stopping two of the biggest fan bases in the sport from looking ahead. Those fan bases belong to Anderson Silva and Nick Diaz, who will be headlining the Jan. 31 event in Las Vegas. Aside from the supporters for Georges St-Pierre, fans of Diaz and Silva are the most boisterous. One would be hard-pressed to have a civil debate with a fan of either fighter without it escalating into an irrational conversation.

Silva fans believe he lost his first fight against Chris Weidman because he was showboating and that if it weren’t for his leg snapping in the rematch he would have undoubtedly found a way to win. Those in Diaz’s corner view UFC President Dana White as an antagonist and believe Diaz loses fights because the judges simply score against him even though his opponents do nothing but lay and pray.

What we can all agree upon is that Silva and Diaz are great for the sport. Silva brings a sense of stability and respect, and Diaz is able to capture the “bad boy” crowd. Diaz is unscripted and blatantly honest to the point where he’s put himself out of a job, albeit temporarily, time and time again.

But what does the UFC need the most, the lore of “The Spider” or the brashness of Diaz?

Both fighters were on quite remarkable runs prior to their recent two-fight slides. Diaz won 11 straight fights between May 2008 and October 2011, and Silva went over six years and 17 fights without suffering a loss. Fans were tuning in to watch Diaz taunt his opponent and flip people off. Those fans were also dropping money on pay-per-views to see if anybody could beat Silva. Both fighters have been a big draw for the UFC while going about their business in completely different ways.

The one thing they have in common? Success.

Diaz’s success inside the Octagon allows him to be able to overcome the adversity he faces outside of it and keep his fans intact. We’ve seen time and time again how a controversial fighter eventually loses a significant portion of his popularity because the wins don’t come as often (see: Tito Ortiz and Chael Sonnen). Once the success fades, a fighter’s conduct isn’t as forgivable and the banter is even less believable. Fans crave personalities, and on a perfect UFC roster, fighters like Diaz and Conor McGregor would fill fight cards week in and week out.

Silva is nearing the end of the road in his MMA career, regardless of his reported 15-fight contract. Even if he is signed for 15 more fights, it should be looked at as no more than the UFC taking care of Silva and keeping him away from any of the other promotions making an offer. It’d be surprising to see him fight more than three to five more times. For all the charisma we see Silva fight with inside the Octagon, he’s just as boring outside of it. Silva’s comments leading up to a fight are generalizations, and the average American fan can’t relate to him. If Silva were to ride off into the sunset, the foundation is so deep in Brazil that the fans would still be amongst the most rabid we’ve seen.

At 31 years old, Diaz has the opportunity to go on another streak during his prime and contend for the title while giving fans everything that comes along with the Nick Diaz show. Silva, nearly 40, has done so much for the sport and will continue to be an ambassador for the UFC long after he’s done fighting. The intrigue in his mortality has faded and, should he lose to Diaz, he’ll need to be careful of not hanging around too long and joining the laundry list of fighters who continue to grasp at straws in hopes of resurrecting their careers.

At this point in time, the UFC needs Diaz to succeed more than it needs Silva.