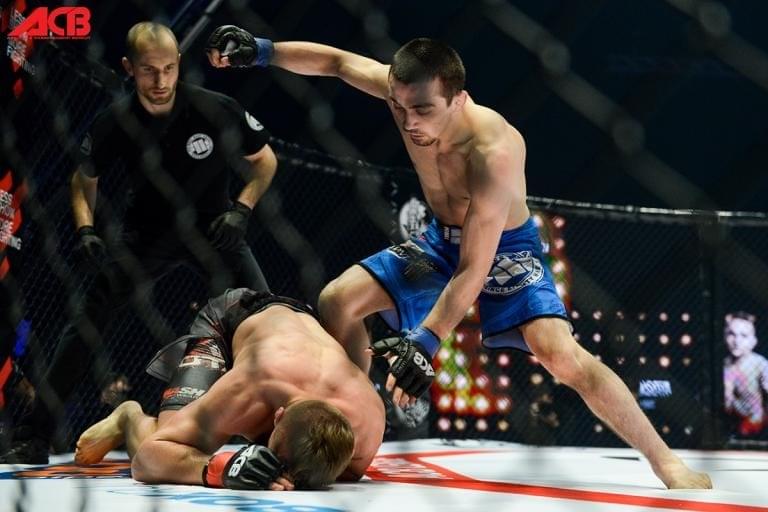 This is a big week for Russian MMA promotions, with three significant cards all taking place in the country over the course of just two days. The first of those events is the 63rd edition of Eurasia Fight Nights. The lineup isn’t as deep as what we’ve seen on some previous efforts from the promotion, but it does include a rematch between Vladimir Mineev and UFC veteran Maiquel Falcão, as well as a strong main event featuring the promotion’s lightweight champion, Magomedsaygid Alibekov, against challenger Kuat Khamitov.

Alibekov, based out of the Gladiator camp, has been competing in the professional ranks since 2014. He took home five wins, including one striking stoppage and one submission, by the end of 2015. Alibekov then became a Fight Nights regular, posting three wins, including one submission finish, over the course of 2016. His three Fight Nights victories came in lightweight tournament action. First, he decisioned Daniil Voevodin in the quarterfinals. In the semis, he sunk in a choke to finish veteran Matej Truhan in the second round. His biggest win came in the finals, where Alibekov clashed with a then 13-2 Nariman Abbasov and took a five-round decision to capture the EFN lightweight strap.

Kazakhstan native Khamitov has a far lengthier resume than his rival. The 29-year-old kicked off his pro career in 2011 and stopped his first nine opponents. Future UFC fighter Paul Redmond was among those initial victims. “Naiman” scored a decision win in his 10th pro outing and then fell upon some hard times. Over the course of his next five bouts, he picked up just one win while losing three and fighting to a draw in one match-up. While two of those losses came against the stiff tests of Sergey Golyaev and Zubaira Tukhugov, Khamitov also dropped a decision to sub-.500 fighter Shinichi Hira. Khamitov rebounded to win another six straight before suffering a loss in his ONE Championship debut against Lowen Tynanes. The Alash Pride FC lightweight champ recovered once more and has won his last three fights, including a title contest and subsequent title defense under the Chinese WBK banner. In December, Khamitov made his EFN debut with a third-round submission finish of Gadzhi Rabadanov.

Unfortunately, the larger sample size for the journeyman Khamitov is proof that he’s not quite a world-class fighter at this point. His losses, while rarely against awful competition, have come against mid-tier fighters in Tynanes, Tukhugov and Golyaev. Khamitov usually looks to finish fights — he has just four decision victories — but he isn’t an easy man to stop. Khamitov has only been submitted once.

Alibekov has put together a respectable run through eight fights. He’s been able to finish opponents, but he’s also capable of outworking his foes en route to a decision nod. None of this bodes well for Khamitov. The challenger simply can’t get the job done against the best competition he’s encountered, and Alibekov ranks pretty high up there. Khamitov’s tough enough to hang in there till the final bell, but he’ll get out-pointed by Alibekov on the scorecards.

Absolute Championship Berkut continues to establish itself as one of the top promotions outside of America. The organization has even snatched up a number of notable free agents over the last few months. The company’s 58th offering, dubbed “Young Eagles 17,” is mostly about the prospects, though. This doesn’t mean there’s a lack of championship action, however. The ACB flyweight kingpin, Askar Askarov, is set to defend his belt against Bellator, Strikeforce and WEC vet Anthony Leone.

Askarov only started plying his trade as a professional in 2013. “Bullet” has yet to see the scorecards through his unblemished eight-fight campaign. Instead, he has alternated between destroying opponents with his fists and putting them away via his grappling. The Fighting Eagle product has been cranking up the dial on his level of competition lately, too. First, he handed out the first loss to prospect Kirill Medvedovski when he secured a choke submission. Then, he put away Marcin Lasota via strikes. He stepped up to take on 26-fight veteran Ruslan Abiltarov and scored a second-round submission victory with a choke finish. Then, in a deviation from his norm, Askarov dealt out another submission finish, this time against UFC veteran José Maria Tomé in a battle for the vacant ACB flyweight crown. His upcoming bout with Leone continues his trend of fighting tough veterans.

Leone’s name might be familiar to American fans from his stints in the WEC, Strikeforce and Bellator. The former was short-lived, with Leone suffering a third-round submission loss to future WEC and UFC star Renan Barão in Leone’s only appearance with the WEC. The wrestler and decorated grappler spent his next three fights jumping between the Bellator and Strikeforce organizations, but he came up empty for his efforts. His Bellator debut resulted in a decision loss to Georgi Karakhanyan. His Strikeforce debut was a first-round loss to the unheralded Josh LaBerge, and his sophomore outing for Bellator ended in a decision loss to Jeff Lentz. Overall, Leone suffered through a rough 1-5 stretch between his WEC fight and the end of 2011. In 2012, he started to find his groove. He scored four straight wins, including three in the Bellator cage. His most notable victory came in this stretch when he edged former Bellator champ and future top-10 flyweight Zach Makovsky for a split decision victory. Leone hit the skids again when he suffered back-to-back Bellator losses against Rafael Silva and Eduardo Dantas, the latter defeat coming in a title challenge at the bantamweight level. Leone has since posted victories over Russian prospects Shamil Magomedov and Rasul Albaskhanov.

Askarov tends to weigh in at just a tenth of a pound above the 126-pound upper limit that would be enforced if he were to get the call up from the UFC. He’s certainly shown the finishing ability to make it to the Octagon, but he needs to be on point at weigh-ins if he’s to be taken seriously by the UFC brass. He’s on the right path when it comes to opponents, though. Tomé was a nice incremental step up from Abiltarov after the 24-year-old’s previous wins. Leone is another tough opponent, but one who brings an excellent wrestling base to go along with a dangerous grappling attack. Leone has eight submission wins, and a ninth isn’t out of the question against Askarov.

While Leone is a threat on the mat, he’s also suffered three submission defeats. Askarov has put together an excellent resume that includes plenty of submission finishes. If these two men go to the ground, fans are in for a treat. In the stand-up department, Leone has failed to deliver a knockout of any variety through 22 pro bouts, whereas Askarov has tallied three wins via strikes. Askarov would probably prefer to test Leone’s chin, but he’ll have to avoid the American’s takedowns, which might be easier said than done.

Leone is frustratingly inconsistent. He’s defeated the likes of Dustin Pague, the aforementioned Makovsky and Frank Baca, but he has come up short against mediocre fighters like the aforementioned LaBerge and Brylan Van Artsdalen. Meanwhile, he has the experience of having faced elites such as Barão and Dantas.

Where does Askarov fit in against the Bali MMA fighter? Well, his undefeated mark and his wins over fighters like Tomé and Abiltarov are enough to suggest that Askarov is the real deal. Leone won’t make it easy, but Askarov should emerge with a submission victory.

M-1 Global used to be the big boy of the Russian MMA scene. The promotion has arguably lost ground to EFN and ACB, as well as Akhmat Fight Show, over the course of the last year, but the M-1 Challenge series still has plenty to offer. Case in point, the interim bantamweight championship affair that headliners M-1 Challenge 76. With reigning champ Pavel Vitruk on the long-term mend, the title scrap features M-1 prospects Movsar Evloev and Alexei Nevzorov.

Fight Club Nart’s Evloev only has six fights under his belt, but he’s impressed thus far. He debuted in 2014 during M-1’s excursion into China. The Russian defeated Jianwei He, who had only one professional fight — a loss — on his record when he met Evloev. The Russian added four more victories, including two submissions and a first-round technical knockout, against low-level competition before stepping up to meet veteran Lee Morrison in his most recent affair. Morrison took Evloev to the final bell, but the up-and-comer emerged victorious over the American.

The 28-year-old Nevzorov has a more extensive fight history. The Alexander Nevsky protege debuted in 2010 and picked up two wins before suffering his first loss. Nevzorov bounced back to the tune of seven victories in a row before enduring his only other career loss, a 2015 defeat courtesy of Antun Račić, a fighter Nevzorov had submitted four years earlier. The Russian has returned to the win column in his last three outings, including two striking stoppages.

Evloev is still in the early stages of his career, but the victory over Morrison was a significant step up for the young fighter. Nevzorov appears to be another strong, but beatable, foe for Evloev. The question is whether Evloev can go the distance with a fighter who is not easy to stop. However, Evloev did well in this same scenario with Morrison, so he should be fine against Nevzorov. This fight goes the distance, and Evloev holds onto his spotless record.