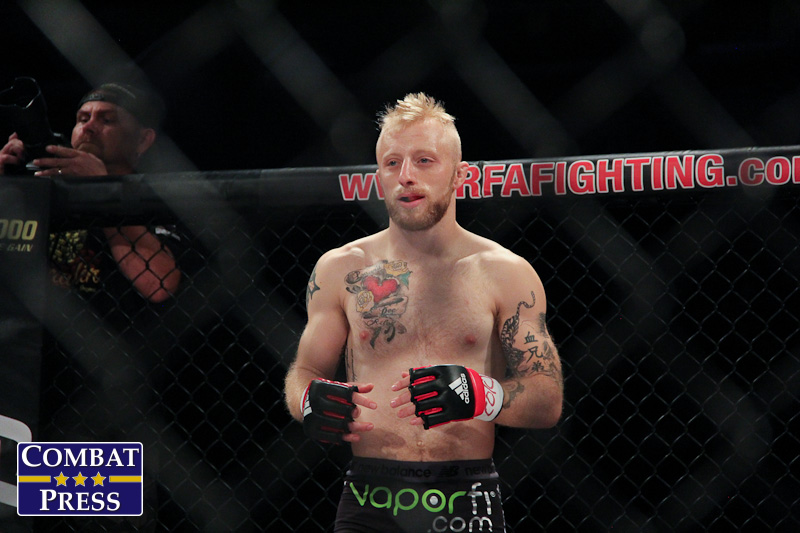 If you’re considered the underdog once, you can usually shrug it off. However, what if people pick you to lose three times in a row? Well, that might drive even the most stoic athlete to the brink of insanity.

Riley, a Colorado native, was ambivalent about being the underdog in his last three fights.

“I might as well continue with it,” he told Combat Press. “I’ve been the underdog my whole career, so I’m just another name for people to hear about.”

After accumulating a 7-2 record as an amateur, Riley turned pro in 2014 and alternated wins and losses over his first five fights to the tune of a 2-3 record. He couldn’t seem to get things going when the fight went the distance. His two wins were submission stoppages, but all of his losses went to the scorecards. However, Riley has since enjoyed a three-fight winning streak, including a victory over UFC veteran Hugo Viana, while fighting for the former Resurrection Fighting Alliance.

“I’ve just had a change in mindset,” said Riley, whose professional record now stands at 5-3. “I’m having fun now, and I’m just a different fighter.”

Riley has also changed up his training in an effort to keep things fresh. He splits his time between Pariah MMA in Colorado Springs, Colo., and an affiliate gym of the Jackson-Wink MMA Academy in Pueblo, Colo.

“One of my main goals has been getting more people to work out with,” Riley said. “I work out with people who are bigger, smaller, shorter and taller. And I like getting a different point of view from different coaches.”

Riley will bring his different perspectives in MMA to the cage on Friday, April 21, when he faces undefeated six-fight veteran Jerome Rivera for the Legacy Fighting Alliance, the new promotion formed out of the merger of the Resurrection Fighting Alliance and Legacy Fighting Championship. Riley was excited when the merger came about to create the LFA, noting also that he’s excited to fight in front of “bigger crowds.” Now, he also gets a chance to ruin Rivera’s unblemished run.

“I hear he’s a good grappler,” Riley said of Rivera. “I’m just going to use my distance and my striking to maintain control in this fight.”

After undergoing some changes in his personal and professional life, Riley is looking forward to making fighting his full-time career and focusing on himself. This might include indulging in one of his favorite pastimes: hunting.

“It’s nice to take my mind off things, and it makes for some nice bonding time with my family,” Riley said. “It’s the only thing I really do outside of fighting.”

Riley has every intention of being the hunter on April 21. Rivera is his prey.