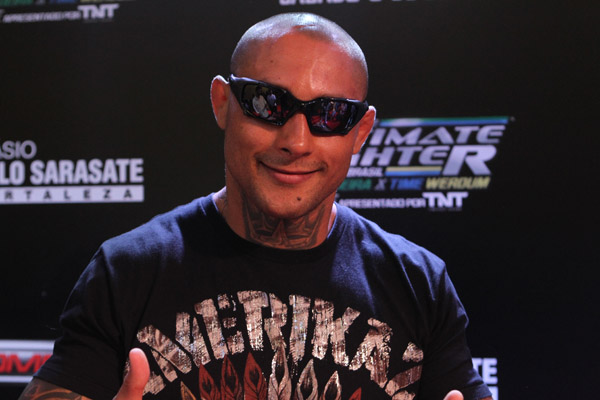 The World Series of Fighting promotion has become a sanctuary to wayward fighters. You could conceivably call them “The Island for Misfit Fighters.” Although the promotion has been welcoming to some of MMA’s controversial figures, the company is taking its biggest gamble yet with one of its recent signings.

Thiago Silva was, at one point, among the elite light heavyweights in the world. The Brazilian had stretched an undefeated record to 13-0 and was on the cusp of a title shot going into his fight at UFC 94. Unfortunately for Silva, he ran into a buzzsaw in the form of Lyoto Machida. Despite the setback, Silva returned to score an impressive knockout finish of Keith Jardine at UFC 102 that essentially put him back on track. However, it was after his next fight, which came against Rashad Evans at UFC 108, that the wheels began to come off for Silva.

Evans used his wrestling skills to put Silva on the mat and take a decision win, but Silva pointed to a back injury that severely limited his performance. Silva remained on the shelf for nearly a year, but he returned with a vengeance at UFC 125. His performance against Brandon Vera instantly became an internet sensation as GIFs of Silva playing the drums on Vera’s back in the middle of the fight and memes of Vera’s severely broken nose were popping up everywhere. But Silva’s conquest would be short-lived. It was soon revealed that he had submitted an altered substance to the Nevada Athletic Commission. The Brazilian released a statement citing the same back injury as the reason for his transgression.

What would follow was another year of failed tests and underwhelming performances. He recovered with two wins in 2013, but he’s now clinging to the last gasp of a career. That’s due in large part to the circumstances of his turmoil-filled 2014.

On Feb. 6, 2014, Silva was detained after allegedly threatening to shoot 25 people inside a jiu-jitsu school, including his estranged wife and the man she had a relationship with, the gym’s owner Pablo Popovitch. The details surrounding the allegations made against Silva led UFC President Dana White to proclaim that Silva would “never fight in the UFC again.”

However, in September, all charges were dropped when Silva’s estranged wife, Thaysa, became uncooperative and fled the country. The very next day, Silva was back on the UFC roster. However, his second stint with the promotion ended in abrupt fashion when the Brazilian was cut before the end of the month after his ex-wife released a damning video of the fighter.

Now, Silva will have another chance to redeem himself under the WSOF banner. The promotion has taken a little flak for signing the troubled star, but WSOF executives Ray Sefo and Ali Abdel-Aziz assured MMA fans that they’ve done their homework.

“[WSOF executive vice president] Ali [Abdel-Aziz] and I talked about it,” Sefo said. “We researched his situation, and the charges were dropped. He wasn’t convicted. In my opinion, you’re innocent until proven guilty. The guy is a great fighter so we want to give him an opportunity.”

Abdel-Aziz echoed that train of thought.

“I’ve talked to a lot of guys in his camp,” Abdel-Aziz said. “Everyone talks about his character. I’m lucky enough to know a little more about the situation with his ex-wife, and I feel comfortable with this. If the judge didn’t convict him, why should we convict him?”

It seems fans are willing to forgive and move on as well. Glance at the numerous articles littered through the MMA blogosphere and you’ll come across a number of comments wishing Silva future success or saying that the man deserves a second chance. It’s shocking considering the general public tends to have a guilty-until-proven-innocent mindset. It’s also a surprise considering MMA fans are grabbing their torches and pitchforks to head down to Jon Jones’s house and persecute him for his use of recreational drugs, but they’re willing to forgive some serious allegations levied against Silva (not to mention video evidence).

However, whereas Jones has failed to resonate with fans, Silva has always been a fan-favorite. He has a fighting style that features pure violence preluding a knockout blow. His trademark throat-slash gesture is also one of the most recognizable taunts in MMA history. And then there’s his background of growing up in the favelas of Brazil and leaving his abusive family behind. One can see why the average fan would root for the guy who grew up in a troubled area and has the knack for producing highlight-reel knockouts.

The WSOF is no stranger to taking on guys that nobody wants. Fighters like Rousimar Palhares and Anthony “Rumble” Johnson all came with their own baggage. Neither of those two had the type of problems Silva has endured, but each has gone on to have successful runs in the WSOF. In Rumble’s case, the promotion gave him a platform on which he was able to fully rehabilitate his career and transition back to the UFC, where he has become an instant light heavyweight contender.

Silva will have the chance to rehabilitate his career as well. The WSOF has signed him on to compete in its four-man light heavyweight tournament to crown an inaugural 205-pound champion. Silva will face Ronny Markes in the opening contest, while a returning Matt Hamill will face a yet-to-be-named opponent in the other opening-round bout. It’s a quick path to redemption inside the cage for Silva. He only needs to win two fights in order to become a champion.

It’s a big gamble for the WSOF to not only sign the troubled Brazilian, but to also put him in the position to become one of the faces of the promotion. The company has shown that it’s capable of handling troubled stars in the past, but those fighters had problems related to fighting. Silva’s issues often come outside the cage. With the sports world cracking down on domestic violence after the Ray Rice-NFL debacle, it will be interesting to see how newer MMA fans react to Silva. Despite the WSOF’s previous success with other fighters, Silva represents the most dangerous signing in terms of public relations for the promotion to date. If the company can rehabilitate Silva’s career and image, it will go a long way in establishing the WSOF as a real player in the MMA world.