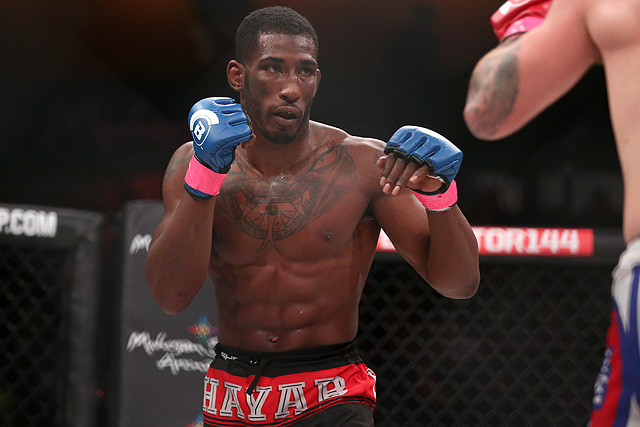 It’s safe to say no one wants to be defined by their worst moment.

Jeremie Holloway’s worst moment as a fighter came last year. He suffered a loss to Michael “Venom” Page at Bellator 153.

“It was my first fight on TV and I didn’t want to lose, and I damn sure didn’t want him to dance in front of me,” Holloway told Combat Press.

“[Page]’s undefeated, so you can’t take that away from him,” Holloway said. “But Bellator has kept giving him vets and hasn’t put him against any marquee names like Paul Daley or Brennan Ward. They also brought in [Lorenz] Larkin and gave him an immediate title shot. It seems like they want to give all the former UFC guys title belts right away.”

Holloway’s fight with Page was his second for Bellator, which is far and away the biggest organization Holloway has fought for since starting his professional career in 2014. While his Bellator run was not successful inside the cage — he lost in both of his appearances — he still considers it an educational and eye-opening experience.

“Just being around the other fighters and watching their preparation, I took in a lot of it after the fact and have carried it with me,” said Holloway, who holds a record of 7-2.

Holloway combined his Bellator education with his pre-existing work ethic, which was honed by playing football and basketball growing up in his native North Carolina. Holloway played outside linebacker and free safety at Greensboro College, where he developed good habits that separated him from many of his teammates.

“A lot of those guys just coasted off their talent, so when I watched film, I would do so by myself,” Holloway said.

He also grew up around combat sports with two uncles who competed in boxing and kickboxing. Holloway decided to drop out of school to pursue MMA full-time. His nickname, “Hit Em,” was earned from his part in multiple street fights.

A medical suspension kept Holloway out of action until January, when he competed and triumphed in his first Muay Thai bout. He used his recovery time and preparation for the bout to get back to the basics.

“I switched up my training, because I wasn’t really focusing on my skills,” he said. “I needed to focus more on my strengths instead of just my weaknesses. I started doing more boxing and wrestling, and I started going to shows and calling guys out after their wins.”

It was this initiative that led Holloway to the Legacy Fighting Alliance and his first fight for the organization at LFA 8 on Friday, April 7, in Greenville, S.C. Holloway is slated to face Dave Vitkay, a veteran with an 18-12-1 mark.

“He’s a heavy grappler, and he has no striking that’s a threat to me,” Holloway said. “He’s very sluggish with his punches, and he will suffer more damage if he tries to stand and trade with me than if he just grabs me and grapples with me. I’m going to finish this guy — I don’t know what round, but it’s going to come out of nowhere.

“I’m excited about a fight for the first time in a while. I feel very privileged to be a part of LFA, and I have to make the most of it. A lot of guys want this opportunity, and though I felt nerves when I fought for Bellator, the nerves for this fight are on another level. It’s going to be a great show, and this fight can only go one way. The fans are going to get their money’s worth.”

Holloway won’t be defined by his worst moment. He’s eager to move on from his first Bellator stint and his loss to Page.

“This next fight has lit a fire under me and I’m gunning for anyone on a winning streak,” he said, mentioning fighters like Gilbert Urbina as possible future opponents. “I’m trying to take someone else’s thunder.”