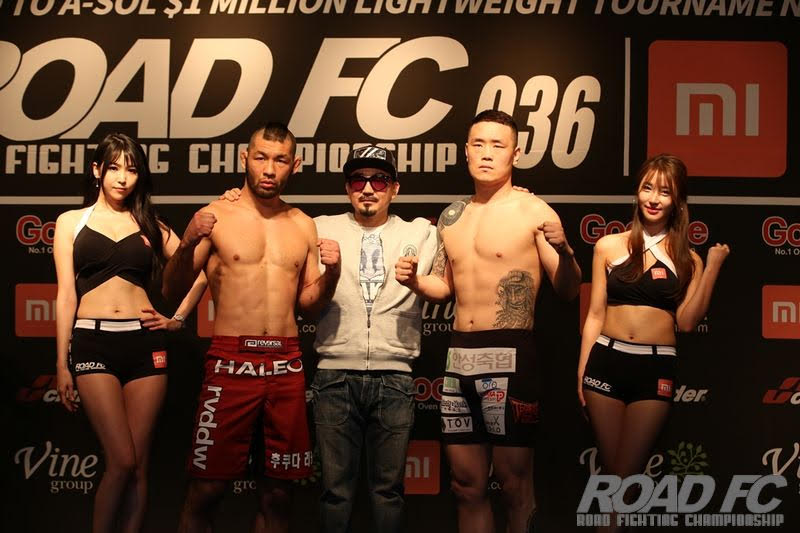 In the main event of the evening, former Road FC middleweight champion Riki Fukuda takes on Nae Chul Kim for an opportunity to fight current middleweight titleholder Jung Hwan Cha. Fukuda makes his return to the cage after more than a year away following his loss to Cha at Road FC 028. The second-round knockout halted Fukuda’s four-fight winning streak following his departure from the UFC. Kim enters this title eliminator having won all six of his bouts under the Road FC banner.

The co-headliner features one of seven qualifying bouts in the $1 Million Lightweight Tournament “Road to A-Sol.” The seven winners will be seeded into the 16-man field, which features qualifying trials in China, Russia, Japan and South East Asia. The Korea and International Group A trials feature 14 fighters from eight different countries. The tournament field consists of former UFC fighters Ronys Torres, Leo Kuntz and Albert Cheng, plus promotional champions Shamil Zavurov, Rodrigo Caporal and Gleristone Santos. Expect furious action with the million-dollar grand prize just five wins away. Kuntz missed weight by 150 grams, so he will be deducted 50 percent of his purse and five points in the first round.

Further down the main card, former Japanese pro wrestler Yoshiko Hirano meets South Korea’s Sun Yoo Cheon. Yoshiko is notorious for her brutal beating of Act Yasukawa in their World of Stardom championship match, dubbed “The Ghastly Match.” Yoshiko took the scripted bout into her own hands when she turned the storyline around in a very real way. She was suspended and stripped of her belt following the pro-wrestling match turned beatdown in the ring. Yoshiko steps into the cage for the first time against an opponent who can fight back.