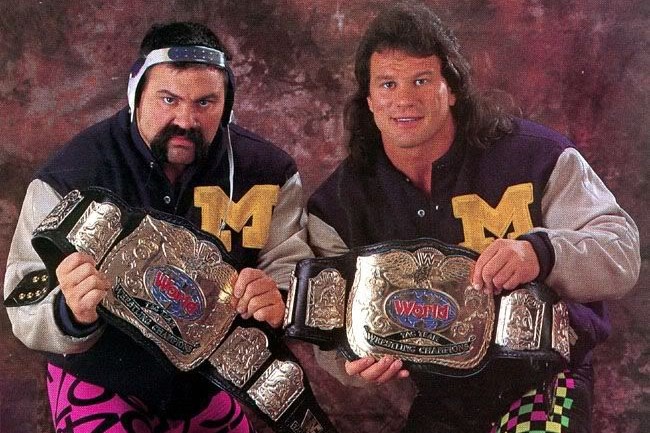 Whether we as fans like to admit it or not, the worlds of mixed martial arts and professional wrestling commingle. The association has always been there, but most of the times, we like to look the other way.

Think about the crossovers that have occurred throughout the years. They have happened both ways.

Ken Shamrock and Dan Severn were UFC superstars that ventured their way over to the WWE during the Attitude Era. Shamrock was a pretty major star during that time — if you don’t believe me, just watch the Attitude-era Raw episodes that air on the WWE Network. Tank Abbott participated in WCW for a period of time. Ronda Rousey made a cameo at this year’s WrestleMania. Even guys like Josh Barnett, Quinton “Rampage” Jackson and Tito Ortiz have all tried their hand in wrestling in some capacity.

Then there are the crossovers from pro wrestling to MMA. Obviously, the biggest name that comes to mind is Brock Lesnar, who was able to become the UFC heavyweight champion in an insanely short amount of time. Other pro wrestlers have crossed over too. CM Punk is set to make his debut in the near future. Bobby Lashley continues to compete in both pro wrestling and MMA. Dave Bautista tried his hand at MMA once. Jushin “Thunder” Liger, Alberto del Rio, Bart Gunn, Bam Bam Bigelow and a number of others have also competed in MMA bouts. The list goes on.

As fans of both sports and “sports entertainment,” we often times ponder the “what ifs” of crossovers from wrestling to MMA and vice versa. For the most part, you hear the same names come up when we think, “How would this guy have done had he crossed over?”

This is especially the case when it comes to wrestlers trying their hand at MMA.

The biggest repeat name I often hear in this conversation is Kurt Angle, the 1996 Olympic gold medalist wrestler. Given his wrestling pedigree and immense athletic skills, there is no doubt that Angle would have been a great mixed martial artist had he hit the gym and developed his all-around game as opposed to taking up pro wrestling.

However, a name that is rarely brought up in this conversation is that of a guy who would not only be successful in MMA, but held the potential to become a massive draw due to his reputation as a hot-headed, brash badass that fans are drawn to. That man is Scott Steiner.

When it comes to the pro-wrestling business, few men draw the fear and respect of locker room companions as much as Steiner, a reputed tough guy. Just read the folk tales online, and you will see that nobody ever wanted to mess with Steiner.

If you are unaware of this man, Steiner was an All-American wrestler at the University of Michigan, where he stood out for his athletic acumen. Upon finishing college, he took to the pro-wrestling world, where he quickly became a name to watch in a tag team with his real-life brother and fellow tough guy Rick Steiner, who also wrestled at University of Michigan.

Scott was an innovator in the wrestling ring. From freakish moves like the Frankensteiner to the Steiner Screwdriver, he was constantly wowing fans around the world, from Japan to the United States and everywhere in between.

Along with that innovation came stories of his backstage antics as he progressed in his career. Few had the spine about them to ever mess with Steiner, and when things did go down backstage, you didn’t want to be the man that Steiner had his sights set on.

Quick example: Steiner was known to have once gotten into a dustup backstage with Diamond Dallas Page, a fight which would have ended badly for Page had Steiner not been physically pulled off of him by multiple people. It’s just one exhibit of how Steiner was the king of the jungle in terms of being a shooter during his time.

Imagine Steiner, had he taken to MMA. Obviously, in the time MMA has been around, Steiner would not have been making nearly the amount of money he was making as a wrestler. It wasn’t even competitive.

But think about it. Had Steiner been able to compete in MMA, he would have been an attraction that a promotion could build around.

Now, I know, the speculation runs rampant about his alleged performance-enhancing drug abuse. However, think about the times he would have been fighting and I doubt serious drug testing would have been a major concern. That aside, Steiner’s personality, swagger and intensity would be a sight to see in the cage. Just watch one of his promos in the WCW, WWE or TNA during the mid-to-latter part of his career. The man spewed the type of intensity that the 300 Spartans at Thermopylae couldn’t match.

Steiner’s wrestling base would be a huge asset, along with his physical strength, explosiveness and athleticism. If he were to add some submissions and on-the-feet striking, there is no doubt that Steiner would have been a terror in the early heavyweight division. Perhaps think of a more psychotic version of Mark Kerr.

He could sell fights too, which is important, as being a draw in MMA is vital. Just ask the aforementioned Rousey or rising UFC star Conor McGregor, two fighters who have turned themselves into marquee attractions for the UFC. Steiner could do the same thing.

The dude could cut a serious promo in pro wrestling, whether it was kayfabe or a shoot. Imagine when real emotions and a real situation presented itself in the form of a cage fight. Steiner, who has never been accused of being shy about his opinions on people, would be able to grab fan attention and coax those fans to pony up the dough on a pay-per-view featuring the pro-wrestling star.

Given that Steiner is a great amateur athlete, a legitimate tough guy and a great fight-seller, there is no doubt that he should be in the discussion as one of the potential best crossovers to MMA had he given it a second thought. Sure, Angle will always be the “one that got away” and the one that would have had the potential for great success in the MMA format, but there is no doubt that Steiner would have been a star who could have competed at a high level.