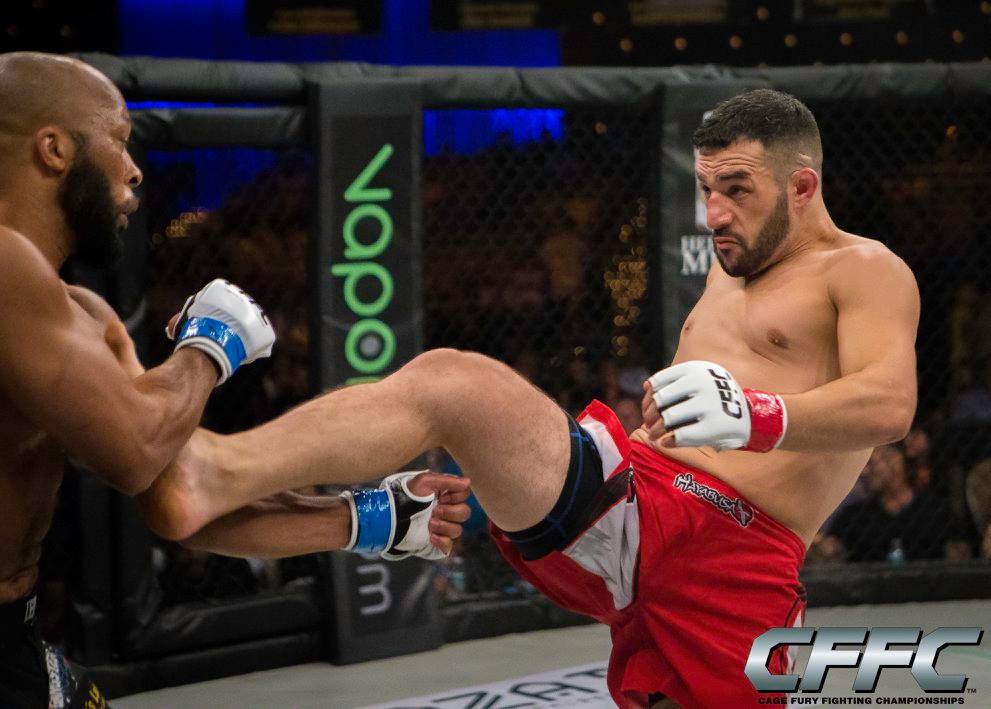 The newly formed Legacy Fighting Alliance has been busy. In just its second month of existence, the organization, a merger between the old Legacy Fighting Championship and Resurrection Fighting Alliance promotions, is already on its fourth event. This effort features two title tilts, including a women’s flyweight match-up between Andrea Lee and Heather Bassett and the featured headliner between featherweight titleholder Kevin Aguilar and challenger Damon Jackson.

Aguilar’s only career loss came in a Legacy featherweight championship showdown. On that occasion, Aguilar, already a Legacy and Bellator veteran, squared off with UFC and WEC mainstay Leonard Garcia. Garcia squashed Aguilar’s title aspirations with a first-round TKO finish. The loss halted a run that was highlighted by a decision win over veteran Nick Gonzalez and a submission finish of the previously undefeated Hunter Tucker. Aguilar rebounded from the defeat to score a trio of victories under the Legacy banner. First, he stopped Alex Black via TKO in the third stanza. Next, he forced David Bosnick to submit as a result of strikes in the second round. Then, he claimed Legacy gold with a split decision over Tony Kelley. Overall, the 28-year-old has seven finishes by some form of knockout and three victories via submission. He has only seen the scorecards twice in his pro career, which kicked off in 2010. Aguilar had no combat sports experience prior to training in MMA.

The 28-year-old Jackson turned pro in 2012 and has already made two appearances under the Bellator banner and three appearances in the UFC’s Octagon. “The Leech” has scored finishes in all but one of his victories. This includes eight submissions and two technical knockouts. The Octagon MMA product is a former NAIA All-American wrestler and learned jiu-jitsu and boxing during the wrestling off-seasons. After going undefeated through his first nine fights with finishes in all nine fights, including a Legacy featherweight title fight against the aforementioned UFC vet Garcia, Jackson landed in the UFC. His Octagon debut in August 2014 resulted in a submission loss to Yancy Medeiros. Jackson’s sophomore UFC outing against Rony Jason was eventually overturned to a no-contest. In his final UFC fight, Jackson fought to a majority draw with Levan Makashvili. Jackson has won two fights since parting ways with the UFC. He earned his way into a title shot by defeating Charles Cheeks III at LFA’s inaugural event.

Aguilar is an incredibly tough opponent for anyone. He appeared to be just a step away from the big leagues when he was served up a setback courtesy of the aforementioned Garcia. Jackson is another uphill battle for Aguilar. These guys have a couple of common opponents. Each handed Hunter Tucker a loss, but Jackson performed better against Garcia and came out with a win. MMA math doesn’t always add up, but Jackson’s quick stoppage of Garcia and his tough fights in the UFC create a compelling argument for his chances against Aguilar.

Aguilar fell to Garcia almost as quickly as Garcia succumbed to Jackson. The difference is in where the fights ended. Garcia, a willing brawler, put Aguilar away with strikes. Meanwhile, Jackson was able to take the UFC vet to the mat and expose his weaknesses in the grappling department. This fight, however, is likely to pit Aguilar’s striking against Jackson’s wrestling and grappling. Jackson has never been knocked out, but Aguilar has never been submitted.

Despite entering this contest as the shorter fighter by roughly four inches, Aguilar will hold a slight reach advantage. It might not be enough, though. Aguilar’s razor-thin victory over Kelley might be a sign that the champ is in for some struggles when he once again steps up to face a tougher opponent. Jackson has faced his own setbacks, but they seem to have made him even stronger. If he can’t get the finish, Jackson will at least do enough to earn the win on the scorecards.

It’s not the main event. It’s not even the co-headliner. However, the light heavyweight showdown between Leonardo Silva and undefeated upstart Alan Bispo is the featured fight on Aspera Fighting Championship 49, a card that also features UFC veteran Thiago Tavares. Silva and Bispo will clash for the promotion’s vacant 205-pound crown.

Silva’s career kicked off in 2013. He reeled off six straight finishes before going the distance with Thiago Silva (not the UFC veteran). In his next appearance, the 24-year-old fought for the Jungle Fight promotion and suffered a doctor’s stoppage TKO loss to Klidson Farias. He rebounded with a victory over Flavio Magon for the Copa Brasil de MMA light heavyweight strap. “Cabeção” has five wins via strikes and two victories by submission. He has only seen the scorecards in one fight. The Gracie Butantã and Gilmar China Team export has made two prior appearances under the Aspera banner.

Bispo made his debut in 2013 as well, but he fought sporadically until 2016, when he ticked off three wins in one calendar year. He stopped his first three opponents in the first round and finished his first four opponents before going to the scorecards in his most recent fight. That most recent fight came under the New Corpore Extreme banner and netted Bispo the NCE light heavyweight strap. The fight came against the 30-year-old’s most accomplished opponent, the 5-0 Daniel Moraleida, on the biggest stage Bispo had ever fought on.

Bispo has shown some promise, but he’s still in the early stages of his career and hasn’t faced quite the level of competition Silva has seen. The younger Silva is a finisher who should be able to dispose of Bispo and capture yet another piece of gold for his trophy case.

Cage Fury Fighting Championships has been somewhat quiet recently. The promotion canceled its November event and rescheduled for mid-December. Its 63rd event will also serve as its first of 2017. While the promotion hasn’t been as active in recent months, it will try to make up for that downtime by hosting a trio of title fights. The most notable of these contests is the featherweight championship showdown between titleholder Jared Gordon and challenger Bill Algeo.

Gordon has been a staple at the top of the Cage Fury ranks. The 28-year-old made his pro debut with the organization in 2011 and returned as a steady part of the roster in 2013 following a four-fight stint in Mexico. “Flash” initially competed as a lightweight, but following his return and a three-fight winning streak, he dropped to featherweight and unsuccessfully challenged for the Cage Fury title. He came up short against UFC vet Jeff Lentz in his title bid and watched as a rematch fizzled. Instead, he returned against veteran Anthony Morrison to vie for the title vacated by Lentz. Gordon landed a head kick that knocked Morrison out in the first round. He scooted back to lightweight for an August match against Dawond Pickney that ended in a submission victory for the featherweight champ. After two scheduled bouts fell apart in late 2016, Gordon remained on the sidelines. This will be the first title defense for Gordon, who has won five fights by way of strikes and two via submission.

The 27-year-old Algeo is also known as the “Honey Badger.” The Team Titan MMA fighter has split his time between the Xtreme Fight Events, World Series of Fighting and Cage Fury FC organizations. His debut came with the XFE in 2012. He went just 1-1 with the promotion before making his first appearance with Cage Fury. Algeo won the CFFC 20 co-headliner and vaulted onto the WSOF stage in a prelim bout against Frank Buenafuente. Algeo submitted Buenafuente and then returned to Cage Fury, where he stopped his next three opponents. His strong run put him in position to headline an XFE/CFFC show against Shane Burgos, but Burgos, now under contract with the UFC, scored the submission win. Algeo returned to the win column at CFFC 49 against Anthony Terrell Smith and then defeated the aforementioned Lentz at CFFC 57 in March 2016. The fight with Lentz was meant to be a championship affair, but Algeo missed weight.

Algeo has a chip on his shoulder after missing out on his chance to claim CFFC gold. However, Gordon is no slouch on the feet either — just look at his stunning finish of Morrison. He’s a survivor who has an interesting backstory of overcoming drug addiction to become a successful fighter. Algeo, however, is a tough challenge for Gordon. Despite a touted Muay Thai game, Algeo has finished a majority of his fights by submission. It’s a combination of skills that could give Gordon headaches. Yet, Algeo has been known to make mistakes. He’s been caught in submissions twice, and Gordon does have a background that includes time spent training at Renzo Gracie Jiu-Jitsu. This should be a close back-and-forth affair, but Gordon should emerge with a hard-fought victory on the scorecards.