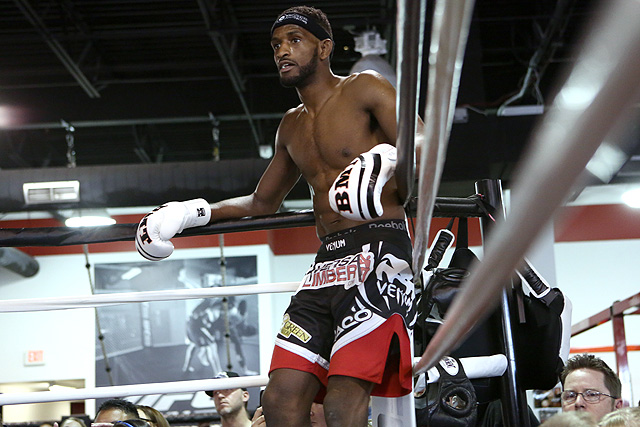 UFC 207’s Neil Magny: The Bumpy Road to the Top

No, this is not some sort of strange code. This was Tyron Woodley’s five-year road to the UFC welterweight title, spelled out in wins and losses. Needless to say, there were a lot of bumps along the way.

No fighter sets out on his career saying, ‘I would like to win a bunch of fights, but not in a row. I would like to lose about three times, sit on the bench for a year and a half and then knock out Robbie Lawler for the title.” There are zero fighters who have this five-year plan. Not even Woodley. However, Woodley did exactly that, won the strap and showed the world that even champions are not always perfect.

Fellow UFC welterweight Neil Magny has forged a similar path. In the last five years, he has strung together 13 wins and five losses to take his total professional record to 18-5. Magny has certainly not been perfect over the years, but he has made a name for himself in the UFC. Now, he sits at No. 8 in the UFC’s official poll for the division. There have been a few bumps in the road along his way to the top. The most recent came in his last fight.

Last summer, during International Fight Week, Magny was set to face Dong Hyun Kim as his first top-10 opponent. Within a couple weeks of the scheduled fight, Kim had to pull out with an injury. Lorenz Larkin stepped in as Kim’s short-notice replacement. Magny was pretty devastated. He was chomping at the bit for this shot. He took the fight with Larkin, and was expecting an easy win. Big mistake. Larkin may not have been the flashiest name, but he was a longtime middleweight who had recently dropped down to welterweight. Larkin had put on some very impressive performances in his newfound division, including a striking finish of John Howard and a split decision nod over Jorge Masvidal. Magny was his next victim.

“I can go back and give a bunch of different excuses for why that fight didn’t go my way, but, at the end of the day, the biggest thing I did was overlook my opponent,” Magny told Combat Press. “I thought I was just going to go in there, take him down and submit him. I thought it was going to be that easy. He was a late replacement for ‘Stun Gun’ Kim, and I thought I would just take him down and submit him and move on. He came out ready to fight and did what he had to do to get it done.”

Before the end of the first round at UFC 202, Larkin elbowed his way to a TKO victory, thereby handing Magny the first knockout loss of his career. This did not slow Magny down one bit, though. It was just a bump in the road, and Magny got right back to work.

Within the month following UFC 202, Magny found out that he finally was getting the type of opponent he had been pining for. At UFC 207, which takes place on Friday, the aspiring welterweight will get his crack at former welterweight champ Johny “Bigg Rigg” Hendricks, who is currently ranked sixth in the division. In an unusual turn of events, Magny all of a sudden had three months to prepare for a fight. It’s only icing on the cake that this one comes with huge implications.

On paper, Hendricks has had a lackluster few years, but his 2-4 run includes a controversial decision loss to Georges St-Pierre for the title, a win for the vacant title after GSP retired, a title loss to the aforementioned Lawler, and a couple losses to top contenders. His recent record might look a little rough, but Hendricks has only been fighting some of the best in the world. Magny is not about to make the same mistake he did with Larkin. That would be one bump he doesn’t need.

“I’m expecting him to come out like he did against GSP. When he fought GSP, he had everything to gain and nothing to lose, so he came out and fought the best he’d ever fought. I’m expecting that Johny Hendricks to come out. I can’t look at his last fights and expect that. If you look at my last fight, I made some mistakes. I can’t go into this fight thinking he’s old or washed up or injured or anything like that.”

Hendricks appears to be ready to go. However, the one thing he has always struggled with is weight. Cutting weight is standard practice for a wrestler of Hendricks’ caliber, but the older a guy gets, the tougher it is to get the weight off. He had to pull out of a fight with Woodley at UFC 192 because of complications with his cut. When he used a nutritionist, he made weight with ease in February, but he still looked very depleted against Stephen Thompson.

“Weight is not something that’s an issue for me,” Magny said. “The biggest thing I change in my diet is taking bacon out. I won’t need to change much to lose weight for this fight.”

It’s always a good thing when a fighter doesn’t have to worry about weight over the holidays. Most guys will complain about having a fight between Christmas and late January, but not Magny. He and his team are taking advantage of a nice, full fight camp.

“Training’s going well,” Magny said. “My body’s holding up good. I can’t really complain at all. We brought a couple different wrestlers in to give me different looks, but everything else is still the same.

“I think it’s a good match-up for me. The size advantage I have going into this fight, I think, will work a lot in my favor. When [UFC matchmaker] Joe Silva called me and offered this fight, I was super excited about it.”

Magny is a lanky welterweight, and his range is possibly the longest in the division. Hendricks has always been a shorter, stockier welterweight. Hendricks is coming in six inches shorter and is giving up 11 inches in reach. Magny plans on playing a much smarter game than he did with Larkin.

It should be easy for Magny to stay in Hendricks’ face when he can do it from an extra foot away. He just needs to stay clear of the big bombs that have dropped the likes of Martin Kampmann and Jon Fitch in under a minute.

Magny may have faced a setback with Larkin, but that happens to the best of them. GSP is still arguably the greatest welterweight of all time, and he even lost a couple to Matt Hughes and Matt Serra. Those were just bumps in a road that eventually led to an 11-0 run as the champ before St-Pierre retired. Magny knows that he has plenty of time to make the same thing happen. The next step is on Friday night at UFC 207, where Magny headlines the preliminary card on Fox Sports 1 in the biggest fight of his career.

“If I get out of this fight with Johny Hendricks healthy, I might jump right back in, looking to repeat 2015 and 2014, so I’m not trying to think too far ahead,” said Magny. “Once this fight is over, I’ll focus on whatever comes up next. I would like to fight anybody with a one through a five [ranking] next to their name.”

Magny would like to thank his primary sponsor, MusclePharm, as well as his coaches and training partners at the Elevation Fight Team, plus his family, friends and fans. Follow Neil on Twitter: @NeilMagny
Advertisement