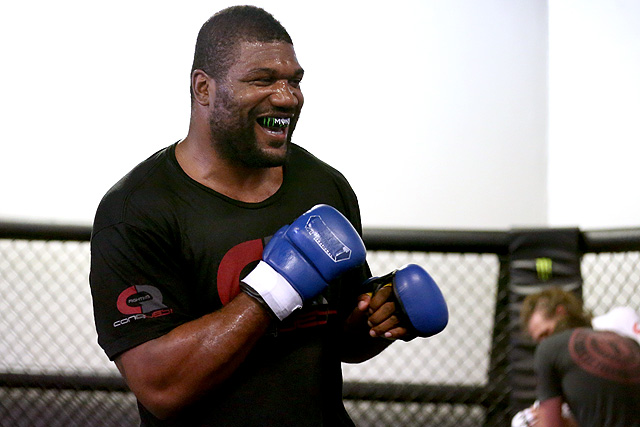 After the success of Dynamite 1, Bellator’s Dynamite series makes a return at the Scottrade Center in St. Louis for Bellator 157: Dynamite 2.

The main event features the return of Pride and UFC legend Quinton “Rampage” Jackson to the Bellator cage against Satoshi Ishii at a catchweight of 215 pounds. Jackson hasn’t fought in just over a year while a long contract battle between the UFC and Bellator was settled. Jackson’s last fight happened inside the UFC’s Octagon against Fabio Maldonado after a three-fight stint in Bellator.

The card also features the Bellator debut of former UFC heavyweight Matt Mitrione, who will take on Carl Seumanutafa.

At the other end of the weight-class spectrum, women’s flyweight contender Ilima-Lei Macfarlane will look to continue her rise against Rebecca Ruth.

The Bellator preliminary-card action will air on Bellator.com at 6:30 p.m. ET. The main card airs at 8 p.m. on Spike TV.

After a long back-and-forth contract dispute, Rampage returns to the Bellator cage for his first fight in more than a year. Instead of a light-heavyweight affair, he takes on Ishii above his normal weight class at a 215-pound catchweight.

Luckily for Jackson, Ishii isn’t a big heavyweight. That should be beneficial to Rampage, especially considering Ishii’s background in judo. Ishii could potentially overpower Jackson in the clinch with throws and trips if he had the size advantage, but he is actually giving up some size to the former UFC light heavyweight champion.

Jackson is going to want to avoid the clinch and keep Ishii off of his judo game. Rampage isn’t particularly enthused when fights hit the ground. In recent fights, he has tended to fade on the ground. Jackson is a fan’s fighter and his aim is to always put on a show for the crowd with his striking skills. He tends to try to overpower his opponent with his hands. If this fight stays on the feet, Rampage should have little trouble against Ishii. This isn’t Ishii’s first high-profile opponent, either. Ishii has fought some of the better names in Pride history, including Mirko “Cro Cop” Filipovic and Fedor Emelianenko. Jackson is just another Pride veteran for Ishii to attempt to overcome, but it should be pointed out that Ishii is a combined 0-3 against Cro Cop and Emelianenko.

Rampage’s return fight to Bellator should go in his favor. He is on a decline late in his career, but it isn’t a steep decline — he has rattled off four straight victories over some good names in Bellator and the UFC. Jackson gets his first knockout in just over two years when he drops Ishii for the win.

This fight is more deserving of headlining status than the Rampage-Ishii showdown. That’s how good of a fight this will be — albeit possibly a very short fight. Former lightweight champion Will Brooks left Bellator for the UFC and, in doing so, created a vacuum at the top of the Bellator lightweight division. Chandler and Freire are here to fill that void.

These two have fought previously, with Chandler getting the decision nod. However, that fight was a little over five years ago. A lot can change in five years, and their previous encounter now seems irrelevant. Both fighters have progressed tremendously since that Bellator 44 showdown.

Chandler has fought hard to get the belt back after losing it to Eddie Alvarez. The promotion has tried to set him up perfectly a couple of times, but he was unable to crack the Brooks riddle either in their interim title fight at Bellator 120 or their contest for the vacant undisputed strap at Bellator 131.

Chandler is a tough wrestler who will look for the takedown often. He does have some power in his hands and good striking to allow him to create openings for his wrestling. This blend of weapons has kept him at the top of the lightweight division in Bellator for so long despite it being one of the deeper divisions on the roster.

Freire is a striker with a strong background in Brazilian Jiu-Jitsu. His ground game is no joke, but Pitbull prefers to knock his opponents out rather than submitting them. He is another fighter with dynamite for fists. Instead of making his fights into technical striking battles, though, Freire tends to draw fights out into brawls, which have proven to be his downfall previously against, for example, the aforementioned Alvarez. Pitbull’s striking has become crisper in more recent fights, but he always has the possibility to rely on that tendency to make fights dirty and overpower his opponents with strikes.

If Freire tries to duke it out with Chandler, Chandler will put him on his back. Freire’s best chance comes in keeping this fight level on the feet and working to land the knockout blow on Chandler. Chandler has a tough chin, though. He’s only been knocked out once — by Brooks — on the feet. Chandler’s three losses came against stiff competition and, other than the losses to Alvarez and Brooks, he has been rather dominant in the lightweight division.

Chandler goes up 2-0 on Freire with a victory in this fight. He’ll use his wrestling to put Freire on his back and use his boxing to create opportunities.

After leaving the UFC for a more attractive deal with Bellator, Mitrione makes his promotional debut against Carl Seumanutafa.

The biggest chance for either fighter to win this fight comes in the form of a knockout. Seumanutafa has won all but one of his fights by strikes. He is a huge underdog against Mitrione, a solid heavyweight during his time on the UFC roster.

Mitrione has an advantage in every department in this fight. He is on a two-fight skid, but that came against rising UFC heavyweight contenders Travis Browne and Ben Rothwell. Those losses were both finishes, but the Browne fight could arguably have been changed drastically due to eye pokes.

Mitrione will use his experience and skill advantage to win this fight on the feet. He will look to grind out Seumanutafa and land the knockout blow early in the fight. Mitrione will celebrate his entry into Bellator with a second-round knockout victory.

Rebecca Ruth shocked the world in an upset victory over Lena Ovchynnikova. Her reward? Another fight as an underdog, this time against Ilima-Lei Macfarlane.

Ruth fought a flawless game plan against Ovchynnikova, utilizing her ground game to neutralize Ovchynnikova. Ruth knew her opponent’s strength was on the feet, so she grounded her opponent. It was a highly impressive performance. Ruth should look to build on it in her fight against Macfarlane.

Macfarlane’s best chance will be on the feet while keeping Ruth at a distance. Macfarlane does have a ground game — she was able to make quick work of Amber Tackett with a first-round submission — and has also made strides in her striking from her Bellator debut against Maria Rios to the fight against Tackett.

Macfarlane has been on the rise in her first couple of fights in Bellator. She should continue to see her stock go up here against Ruth. Ruth’s wrestling will be an excellent test to see just where Macfarlane is at in her fourth professional fight.