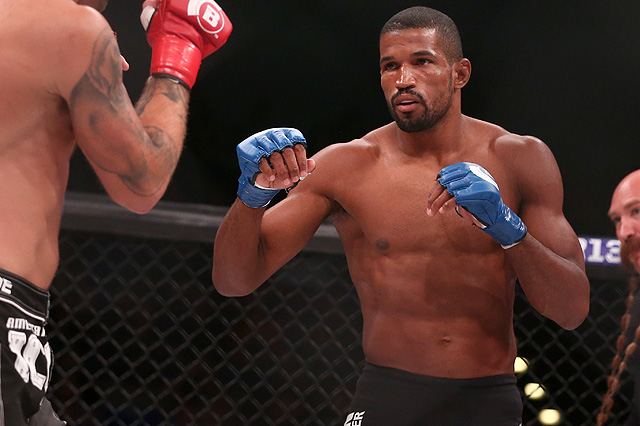 Bellator delivers with events on back-to-back weekends. Last week, it was Bellator 154, and this week Bellator 155 strolls into Boise, Idaho’s Centurylink Arena. The show will continue the trend of a five-fight main card, but the undercard will have a fight that should be touched upon, too, as women’s featherweight Marloes Coenen might finally push to get the inaugural featherweight belt against Alexis Dufresne.

In the headliner, Bellator middleweight champion Rafael Carvalho will defend his title for the first time since beating Brandon Halsey. Carvalho goes up against veteran knockout artist Melvin Manhoef. Manhoef is coming off a knockout victory over Hisaki Kato to get the title shot.

In the co-main event, Bellator veteran Pat Curran will look to buck his trend and get his first winning streak in the last few years together against fellow veteran Georgi Karakhanyan. Both fighters could also potentially submit their bid for a crack at the featherweight crown with a win in this fight. Karakhanyan had previously punched his ticket for the title after beating Bubba Jenkins, but an injury forced him out and he instead fought Daniel Weichel in his next fight and lost by unanimous decision.

Two heavyweight fights are also on the main card. In one, Dan Charles will take on rising prospect Augusto Sakai. In the other, UFC veterans Joey Beltran and Chase Gormley will slug it out. And at lightweight, it’s rematch of Bellator veterans when Marcin Held looks to avenge a prior loss against Dave Jansen.

Carvalho makes his first title defense against the knockout artist Manhoef. Carvalho likes his knockouts just as much, though, as 10 of his 12 victories have ended with strikes. That includes his title-clinching body-kick knockout victory over Brandon Halsey at Bellator 144 in October. Carvalho came out of nowhere to beat Halsey, but he utilized effective distance control to keep the fight off the mat and his size advantage to really pour it on and defeat the champion.

Manhoef isn’t Halsey. He won’t be looking for any takedowns. It simply isn’t part of his skill set. Manhoef does one thing well: he knocks out his opponents.

To negate Manhoef’s chances on the feet, Carvalho needs to do something similar to the game plan he deployed against Joe Schilling, another kickboxer. Carvalho was able to grind down Schilling against the cage and set up takedowns to grind him out on the ground. Manhoef doesn’t have the strongest of chins, but Carvalho would be best served to avoid putting his own chin on the line.

There are not many avenues for victory for Manhoef outside of a knockout. He owns 28 out of 30 victories by knockout, and that’s the one way he could come out of this fight with his hand raised. The kickboxer is going to need to make sure to stay off the ground and counter any takedowns with a strong shot and counter any clinches with a strong exit strike.

Expect Carvalho to retain the belt in this fight with a strong grappling display to neutralize anything Manhoef offers.

Curran has had an interesting last few years after rising to the become one of the best featherweights on the planet. He has gone just 2-3 in his last five fights and will look to get his first winning streak going since 2013. In this five-fight span, Curran has faced some tough names, including Patricio Freire, Daniel Weichel and current reigning champion Daniel Straus. Curran even immediately redeemed his loss to Straus in his next fight with a fifth-round submission victory.

After being one of the more dominant fighters on the Bellator roster and knocking out Joe Warren in one of the scariest ways imaginable, Curran has struggled to pull it together against the top of the division. He has a strong wrestling base and good striking to help set up his takedowns. Curran has been very successful in both departments. He does carry power, too, as both Warren and Marlon Sandro have found out. Curran also doesn’t just use his wrestling to coast to victory. Instead, he actually looks to make moves, land with ground-and-pound and threaten with submissions to help move the fight along.

Karakhanyan is the same way. He has a very good grappling base supplemented by a strong striking game. Karakhanyan has 14 victories by way of submission and is very good at countering the takedown with a guillotine choke, as Bubba Jenkins found out in early 2015. Karakhanyan fought in December against the aforementioned Weichel at Bellator 147, but he dropped a decision and failed in his quest to get back into the featherweight title mix.

This should come down to the striking. Karakhanyan, at least early on, will counter any straightforward takedowns with his guillotine, which makes the takedown a dangerous proposition for Curran. Karakhanyan is also very good off of his back and should make trouble for Curran on the ground. That brings us to the striking department, where Curran has the edge. He should be able to wear down Karakhanyan over three rounds on his way to a decision nod.

Augusto Sakai has been something of a revelation for Bellator. He has gone 4-0 in a division that sorely needs talent. Sakai is coming off a victory over Alex Huddleston at Bellator 145, which was only his second career decision win. The remainder of Sakai’s victories have come by knockout, including his third-round finish of Rob Horton at Bellator 94.

Sakai’s opponent, Dan Charles, also enjoys the finer points of the knockout finish. Sakai will be the bigger fighter by a couple of inches, however, and he typically weighs in 20 pounds heavier than Charles. At only 24 years old, Sakai is really looking at a bright future if he can continue on his path of knockout victories.

Charles is coming off a knockout victory of his own over Chase Gormley. The win came after Charles fell via TKO to Bobby Lashley. As was the case against Gormley, Charles can find his best chance at victory with the flash knockout. Unfortunately for Charles, Sakai has yet to be knocked out in his career. Meanwhile, Charles has been knocked out three times.

Sakai should take the knockout victory.

It has been more than a year since Dave Jansen has stepped foot inside the cage. He suffered the first loss of his post-WEC career in his last fight against recently released Bellator champion Will Brooks. Jansen had been on a seven-fight winning streak before the loss to Brooks. Now, he has to look to rebound against Marcin Held, another title challenger and somebody Jansen has already beaten.

Jansen likes to grapple. It has earned him half of his 20 victories. In his last few fights, however, Jansen hasn’t been able to submit his opponents. One of those fights was against Held in 2013. Jansen was the better of the two on the ground. He was able to constantly escape bad positions and turn them into good chances to lay down some ground-and-pound on Held. As the fight progressed, Jansen started getting the better of the striking exchanges, too.

This fight is going to come down to who has progressed the most since their last fight. Jansen has fought sparingly in the last three years, while Held has fought seven times. Held has gone 6-1 while suffering his lone loss against the aforementioned Brooks. Held has been able to beat some good fighters, including Patricky Freire, Derek Anderson and Alexander Sarnavskiy.The improvements in Held’s striking were evident up until his loss to Brooks where he was beat by a better fighter.

The last time they fought, Held was barely 21 years old. He has improved a lot since then, and he’ll avenge his prior loss to Jansen by earning a decision victory in their rematch.

Much like the other heavyweight showdown, this fight between Beltran and Gormley will come down to who can land the knockout blow first. Both men are UFC veterans who have faced some good fighters in their time.

In a fight that will come down to the knockout blow, Beltran gets the edge. Beltran is as tough as they come, and his fight against Pat Barry showed every bit of that toughness. He was able to take leg kick after leg kick from the kickboxer. As his leg grew more and more swollen, Beltran still marched forward. It was a spectacle to be seen.

Beltran does like to get knockouts. He has won 12 fights by way of strikes, including his first-round finish in his last fight against Lamont Stafford. The biggest problem with Beltran is that he hasn’t remained consistent since his loss to James Te Huna in 2012. Since the loss, Beltran has gone 3-4 with one no-contest.

Gormley is coming off a loss in September. The defeat came in his Bellator debut at Bellator 143. Gormley faced Dan Charles and was knocked out in the second round of the preliminary card. Gormley should have the cardio edge in this fight. The majority of his victories, six, have come by decision. He can go the distance if need be, but Beltran can turn this into a brawl in a hurry.

Beltran should take the knockout victory in the second round.