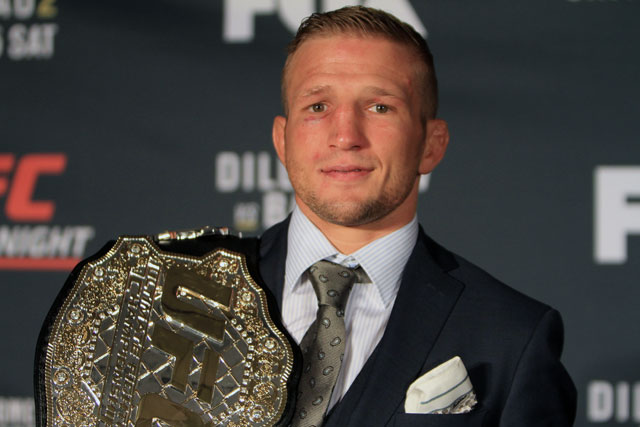 It’s gotten harder and harder for the UFC to announce a big-time fight. Between the 10 fighters holding UFC gold and the dozens of contenders and legends that hold enough stock in the hearts of fight fans to headline a fight card, it seems like fans are handed a new main event booking almost weekly. With 40-plus events a year, actually surprising fight fans with a big match-up has been exceedingly difficult.

That being said, every so often the UFC pulls a trump card from its sleeve that sends the MMA community into a tailspin of speculation and excitement. It’s something the company pulled off nicely this week when it revealed the highly anticipated match-up between T.J. Dillashaw and Dominick Cruz, who are expected to fight for the UFC’s bantamweight title early next year at UFC Fight Night 81 in Boston.

On paper, Dillashaw vs. Cruz is a dream fight that most fans have been pining for since Dillashaw showed off his newfound footwork and striking skills while beating down Renan Barão and taking home the UFC’s bantamweight crown last summer. Known mostly for his wrestling skills prior to winning the belt, Dillashaw looked like he had gone to the Dominick Cruz School of Striking as he decimated one of the absolute best fighters on the planet at the time. Comparisons between Dillashaw and “The Dominator” have been made ever since, and with no shortage of bad blood between Cruz and pretty much the entirety of Dillashaw’s home gym, Team Alpha Male, this bout might be the most anticipated on the upcoming UFC schedule that doesn’t feature Conor McGregor’s hype train.

Of course, as good as the match-up is, it seemed that within seconds of the fight being announced a lot of that initial excitement ended up being replaced by a big fat dose of skepticism. As badly as most fight fans want to see Dillashaw and Cruz throw down, the reality that Cruz would actually need to stay healthy for the next few months leading into the bout immediately cast some doubt as to whether the fight had even a 50 percent chance of taking place.

Not too long ago, a Jacksonville Jaguars coach was discussing his highly touted, yet often injured young wide receiver Marqise Lee and compared seeing him actually on the field to seeing an albino tiger at the zoo. “You get there, and if you’re lucky enough to see it come out of its cage, it’s a good day,” the coach said. That sums up Cruz, too. When you actually get to see him perform, more often than not it’s one of the highlights of the evening. However, those appearances have become exceedingly rare over the last few years.

Since beating Demetrious Johnson in what ended up being his final title defense in late 2011, Cruz has suffered multiple ACL injuries, a groin injury and only made it into the Octagon once in the last four years. It seems optimistic at best, and straight up foolish at worst, to hope for a sudden burst of health from the former champion. Every knowledgeable fight fan ended up having to take the UFC’s announcement with a grain of salt.

With all of the concerns about injuries getting in the way of this match-up, you actually have to give a lot of credit to the UFC, which ended up playing it safe in a scenario where it easily could have thrown caution to the wind. Dillashaw vs. Cruz is one of the few lighter-weight fights that could legitimately headline a UFC pay-per-view event and have a decent amount of fan support behind it. With only around half of its champions considered truly marketable right now, the UFC could have thrown these two men on a pay-per-view card with a quality co-main event and crossed its collective fingers in hopes that everyone made it to the cage safely. Instead, the company took one of its fastest rising young stars and put the most anticipated title fight of his reign on free television, basically ensuring that no matter what happens, another high-profile pay-per-view main event won’t go up in smoke just weeks before the event, which has happened far more often than the UFC would like to recall.

It truly was some genius booking from the UFC to keep Cruz’s legs as far away from a pay-per-view headliner as possible for the time being. But if we’re being honest, there’s a pretty decent case to be made that Cruz shouldn’t be fighting for the title at all at this point in his career. Cruz’s record and resume leave no question that he should be the top contender to Dillashaw’s crown. The man never officially lost the belt that now sits wrapped around Dillashaw’s waist, and after coming back from a three-year layoff and wrecking Takeya Mizugaki last December, Cruz demonstrated that he could still go when he stepped into the cage. However, after Cruz suffered yet another torn ACL after the Mizugaki bout and therefore remained healthy enough to fight only once in the last four years, the thought of Cruz becoming the bantamweight champion once again should be terrifying to fans, as well as the UFC. The MMA community already ended up waiting two years without a true bantamweight title fight before Cruz had to be stripped of the title due to his inability to stay healthy, and the prospect of it happening again should have the UFC and everyone else very worried. A win for “The Dominator” followed by another injury or two could wreak havoc on a division that’s just starting to gain some traction after Cruz forced it into limbo for so long.

A quick glance at the bantamweight landscape makes it clear that Dillashaw vs. Cruz is definitely the fight to make at the moment, though. And with the random but frequent injuries that happen before pretty much any card, it’s hard to blame the promotion for going through with this booking. Guys like José Aldo and Cain Velasquez may not have been as injury prone as Cruz has been over the last few years, but they’re both highly susceptible to pulling out of fights as well and the UFC doesn’t hesitate to put them in high-profile positions either. Injuries are the worst part of this sport, but they’re a major part of the sport nonetheless and hesitating to book fights due to the chance that a fighter may end up injured in camp isn’t an option.

The booking of Dillashaw vs. Cruz is a risky move for a lot of reasons, all of them health related, but the UFC did the right thing in the way it put this fight together. Yes, it’s obvious that everyone, the UFC included, is at least a little skeptical — and with good reason — but denying Cruz a title shot due to the possibility he could get hurt again isn’t a path the promotion wants to start going down.

By throwing this fight on free TV, the UFC will hopefully be able to get a sizable audience to tune in for one of the most anticipated fights the promotion can offer. More importantly, the company won’t be shooting itself in the foot and losing a good chunk of pay-per-view buys if something happens in the weeks leading up to the bout. As hard as it is to be confident about booking Cruz in a title bout at the moment, the UFC did exactly what its president, Dana White, and company love to do. The UFC is giving fight fans the bout they want to see, and the company is doing it via the most low-risk scenario possible.