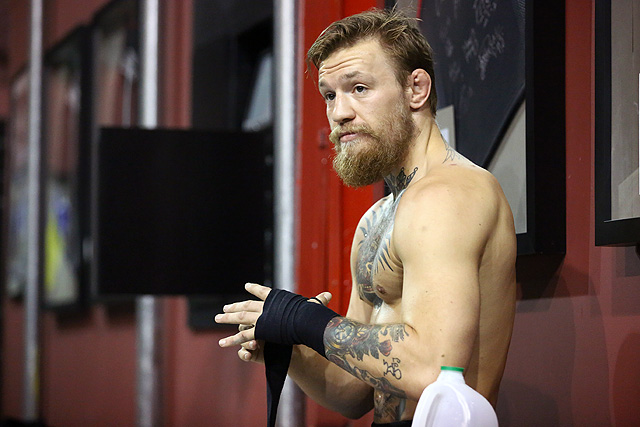 On Saturday, July 11, the UFC will host UFC 189: Mendes vs. McGregor from the MGM Grand Garden Arena in Las Vegas.

In the night’s main event, an interim featherweight champion will be crowned after divisional kingpin Jose Aldo was forced out of the event due to a broken rib. The promotion responded by inserting two-time title challenger Chad Mendes against rising star Conor McGregor. McGregor will enter the contest having yet to taste defeat inside the Octagon. The 26-year-old Irishman has compiled a 17-2 record, with his last five wins coming under the UFC banner. Mendes, meanwhile, will get another crack at UFC gold. The Team Alpha Male product has tasted defeat just twice in his career, both at the hands of Aldo.

The Irish crowd was amped up for Conor McGregor’s headlining affair. McGregor entered the cage to a live performance by Sinead O’Connor. Chad Mendes followed, entering to a live performance from Aaron Lewis. Once the cage doors closed, the pageantry ended and the fight was finally underway. Mendes cut open McGregor and scored three takedowns in the first frame. Mendes seemed to be on his way to another round of wrestling and ground control dominance in the second round, but McGregor eventually escaped from the bottom and the fight returned to the feet. The popular Irish fighter started landing combinations on Mendes, eventually sending Mendes to the mat. Mendes covered up as McGregor rained down blows, but referee Herb Dean had seen enough. McGregor earned the stoppage win just three seconds before the end of the round. With the win, the Irishman captured the UFC’s interim featherweight championship.

“War” is not a strong enough word to describe the bloody battle between welterweight champion Robbie Lawler and challenger Rory MacDonald. The pair traded punches in a close first round. Lawler gained the momentum in the second frame, wrecking MacDonald’s nose and opening up on the challenger. MacDonald swayed the momentum in his favor in round three. MacDonald landed a head kick that left Lawler on wobbly legs, and the challenger pursued the champ while landing a series of strikes. Lawler was on the defensive and appeared to be near defeat, but he held on until the bell. Both fighters were bloodied heading into the fourth frame, but Lawler was able to recover and remain competitive in another close round. In the fifth frame, the pair continued to exchange. Lawler landed a punch to MacDonald’s face just before the one-minute mark that further shattered the challenger’s nose. MacDonald covered up and fell to the mat as a result of the blow. Referee “Big” John McCarthy halted the contest, awarding Lawler with the TKO finish.

Featherweights Jeremy Stephens and Dennis Bermudez engaged in an all-out war for two-plus rounds. Stephens countered Bermudez’s strikes with his power-punching attack, leading to multiple knockdowns in the fight. Bermudez’s wrestling allowed him to edge Stephens in the first frame, but the pair answered each other punch for punch for a very close second round. In the third period, Stephens landed a perfectly timed knee as Bermudez sought a takedown. The knee sent Bermudez crashing to the ground, where Stephens finished him with a flurry of strikes. Stephens was awarded with the third-round TKO victory.

Welterweight Gunnar Nelson is known for his slick submission game, but he showed off his striking against Brandon Thatch before relying on his grappling to wrap up the win. Nelson dropped Thatch early in the first round with a combination and pounced on his staggered opponent. The submission specialist, who also has a karate background, transitioned to his grappling and took Thatch’s back. Nelson attacked with a rear-naked choke, forcing Thatch to tap out just shy of the three minutes into the first round.

Bantamweight Thomas Almeida kicked off the main card with a bang when he finished off Brad Pickett in stunning fashion in round two of their fight. The first round was one of the most entertaining of the night. Pickett stunned Almeida several times on the feet, broke the Brazilian’s nose and left him bloodied. However, Almeida returned fire and rocked Pickett too. Just 30 seconds into the second stanza, Almeida landed a perfectly timed flying knee that sent Pickett crashing to the canvas. Referee “Big” John McCarthy quickly jumped in to save Pickett from further punishment. Almeida was awarded with the knockout victory.

Welterweights Matt Brown and Tim Means were expected to deliver a “Fight of the Night”-worthy performance, and they didn’t disappoint. After nearly a full round of back-and-forth action, Brown scored the evening’s first finish when he rocked Means and then cinched up a guillotine choke to coax the tapout.

Mike Swick made his return to the UFC’s Octagon for the first time since 2012, but he failed to find a victory. Swick’s return came against fellow welterweight Alex Garcia. Garcia was a perfect five-for-five in takedown attempts as he worked toward a unanimous decision victory.

Welterweights John Howard and Cathal Pendred engaged in a stand-up battle for the majority of their three-round affair. Pendred looked to work from the clinch and found some early success, but Howard landed the more effective strikes whenever the pair fought at distance. Howard held an even larger edge in the striking in rounds two and three as he started to throw better flurries from the clinch. One judge saw the fight in favor of Pendred, but the other two gave the nod to Howard to give the Bostonian a split decision win.

Team Alpha Male’s Cody Garbrandt got the best of the striking exchanges throughout three rounds of action against fellow bantamweight Henry Briones and mixed in takedowns en route to a unanimous nod from the judges.

Flyweights Louis Smolka and Neil Seery engaged in a grappling chess match through three rounds, but Smolka displayed the superior wrestling and grappling throughout the contest. The Hawaiian fended off Seery’s guillotine choke attempts and threatened with a variety of chokes of his own. He couldn’t finish the Irishman, however, and instead settled for sweeping all three scorecards en route to a unanimous decision victory.

The night kicked off with lightweights Cody Pfister and Yosdenis Cedeno becoming the first fighters to sport the new Reebok fight kits to the Octagon. After taking severe punishment from Cedeno’s leg kicks in the first round, Pfister transitioned to wrestling in the second and third frames to secure a unanimous verdict.