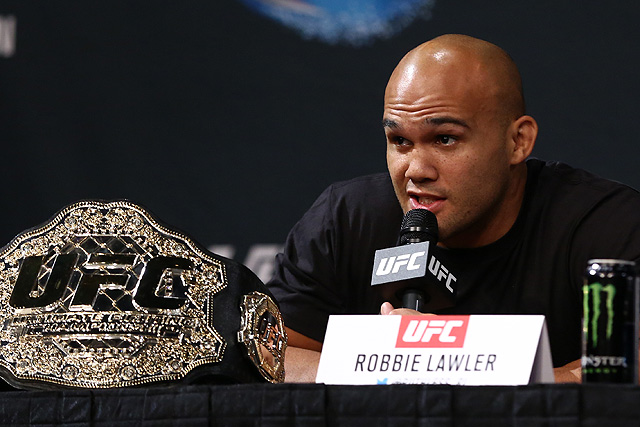 Beyond Ruthless: Robbie Lawler Is Among MMA’s Pound-for-Pound Elite

There was a time in the days of yore of World Wrestling Entertainment when the pro-wrestling company’s CEO, Vince McMahon, talked about “ruthless aggression.” Was he talking about UFC welterweight champion Robbie Lawler? Unlikely. But McMahon’s plea for his superstars to reach up and grab the brass ring could easily apply to Lawler, who deserves consideration among the pound-for-pound best fighters in mixed martial arts.

Since undergoing a career renaissance after rejoining the UFC in 2013, Lawler has only tasted defeat once, and that came in a loss to then-welterweight champion Johny Hendricks in a fight that was closer than it might have appeared to some. Lawler engaged in brutal slugfests with Jake Ellenberger and Matt Brown before avenging his loss to Hendricks and taking the belt in 2014.

Lawler is currently ranked No. 8 in UFC’s pound-for-pound rankings and sits at No. 7 in the Combat Press rankings. He is last among the UFC champions. While comparing fighters across weight classes is tricky, it’s hard to believe that Lawler is considered the “worst” current champion in the UFC.

Call me crazy, but the “worst” champion in the UFC wouldn’t do this to his opponent:

Lawler basically rearranged Rory MacDonald’s face at UFC 189 to successfully defend his title. He put similar beatings — though not quite as brutal — on guys like the aforementioned Ellenberger, Brown and Hendricks en route to the title. Lawler doesn’t just beat guys; he beats them emphatically. And in half of his UFC fights, he finishes them.

Should bantamweight champion T.J. Dillashaw rank ahead of Lawler? Probably not. That’s not to take anything away from Dillashaw, who is exceptionally talented. But Lawler has fought twice as many times as Dillashaw since 2014, with that lone controversial loss to Hendricks standing as the only blemish on Lawler’s record.

Lawler should also rank ahead of flyweight champion Demetrious Johnson, who, despite cleaning out his division, has also fought half as much as Lawler since 2014. Various factors go into determining why a fighter competes only a certain number of times per year, but Lawler being a workhorse should factor in when ranking him among the pound-for-pound best.

Lawler’s incredible career journey should receive some consideration as well. He was a highly regarded prospect when he debuted in the UFC in 2002, but losses to Pete Spratt, Nick Diaz and Evan Tanner sent him packing from the big show by 2004. After picking up eight wins over his next 10 fights across promotions such as Icon Sport, Pride, the IFL and EliteXC, Lawler emerged again as a fighter with a lot of potential. He joined Strikeforce in 2009, but experienced an uneven run at best. He alternated wins and losses for the most part during his time there, beginning with a first-round submission loss to Jake Shields in his Strikeforce debut. With a 3-5 mark during his Strikeforce run, Lawler was considered an afterthought when he entered the UFC. However, as we can see now, he is capable of winning at the highest levels. He is also definitely known for putting on memorable fights.

Lawler’s story of redemption en route to achieving UFC gold is what MMA is all about. With each performance, his legend grows. He doesn’t look to be in any danger of losing his title anytime soon and displays that “ruthless aggression” that Vince McMahon lauded so many years ago. It’s in that aggression that Lawler deserves more respect and consideration as one of the very best fighters in the world.