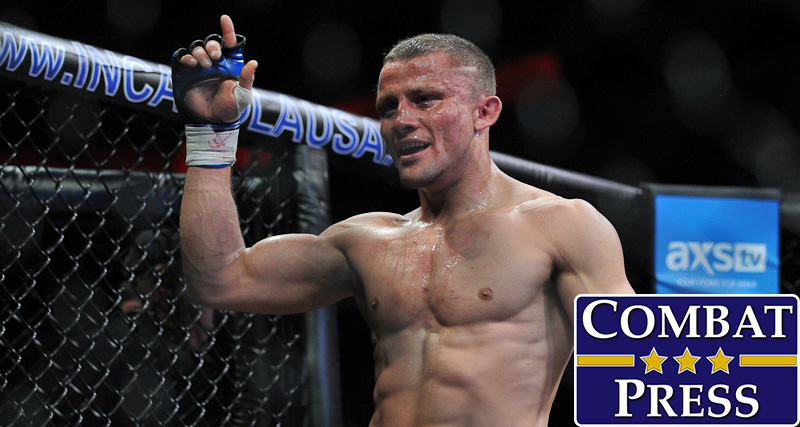 RFA 26’s Danny Mainus: Back Where He Belongs

If you do not know the name, it may look a little funny to you when you first read it. But, for Danny Mainus (pronounced MAY-nus), that’s OK as long as you respect what he brings to the cage. Tonight, he looks to showcase his much improved stand-up game when he takes on Boston Salmon at Resurrection Fighting Alliance 26 in Broomfield, Colo.

For Mainus, the journey to the cage started where a lot of journeys to the cage have started, in the wrestling circle. Mainus was a high school wrestling champion and a very successful collegiate wrestler. Like a lot of wrestlers, he was looking to stay competitive after his collegiate career came to a close. That’s when he got a call to help a friend out with some training.

“I was helping different guys out around Kansas City, to prepare them for wrestlers. I got talked into fighting myself,” Mainus told Combat Press. “I started training jiu-jitsu at Lawrence Jiu-Jitsu for about a year before I even thought about fighting. After that, I started training in Muay Thai. Then I took my first amateur fight in 2009. I won some titles and went undefeated as an amateur. I held titles at 125 and 135 [pounds], and that is when I started training with L.C. Davis. He was the one that inspired me to make the jump to going pro.

“About that same time, I was talking with Trevor Wittman at the Grudge Training Center and we had conversations back and forth about me moving to Colorado to train up there with him. I made the move for my last amateur fight and my first pro fight, and I never looked back.”

Mainus’s professional career has not been exactly what he was hoping for. His first pro fight went like any good story starts off, with a lightning-quick win.

“I felt like I was on top of the world coming in,” Mainus recalled. “I won my pro debut. It was a huge fight. I put away a guy that nobody thought I was going to beat. I put him away in 45 seconds. I was just ready to take on the world, but I already had the torn ACL right after that fight. I got the knee fixed and I came back. Then I received my very first loss ever. To this day, I feel like I didn’t lose that fight. In the end, it was my fault. I left the fight in the hands of the judges. I do agree that it could have gone either way, but I dominated the fight with the positioning that I had on him.

“I feel that I wasted a lot of time dwelling on that last year. I didn’t quite come out of that and it left me in a real funk for a while. Then I lost my second fight in a row, which I feel I should have won also. Then I found out that I had some other health issues after that fight. I found out that I had a kidney disease that I had to deal with from all the weight cutting in wrestling and taking different supplements.”

In the last year, Mainus hasn’t just sat on the sidelines wasting away his gifts. He has been adding to his toolbox of skills.

“I’ve been training my butt off, man,” he said. “I have had a lot of fights fall through. I couldn’t get an opponent to stay locked in to save my life. I think I had about four or five opponents back out of the fight. A couple of them were one or two weeks before the fight. I even had one guy from Maximum Fighting Championship refuse to fight me. The fight was in his hometown, but he just pulled from the card saying that he wouldn’t fight me. I have had trouble trying to find a fight at 135 [pounds], so I decided to look at 125 and still had trouble getting a fight.”

That is where Salmon stepped in.

Salmon is a hot prospect, riding a three-fight winning streak coming into the fight. Salmon’s specialty is his stand-up game.

“I have Wittman here and some really good coaches here. As everyone knows, Wittman is one of the best boxing coaches in the game. So I believe that I am definitely ready for the power that [Salmon] brings and the boxing style he brings,” Mainus said. “A lot of people don’t know, but my brother, Derek, has been training boxing with Wittman for over 10 years and that is how I found Grudge. I feel really confident coming into this fight with the training that I have been doing.”

Tonight, Mainus and Salmon kick off the main portion of RFA 26. This is right where Mainus that he needs to be to get his career back on track.

“It’s huge,” he said. “I have had some ups and downs in my career, and a win on a main card against a game opponent like Boston, it will be what gets me back up to the spotlight and hopefully get my butt into the UFC soon.”

Danny would like to thank Grudge Training Center, his family back home in Kansas, his brother Derek, all his coaches and training partners and Barrett Law Firm. Follow Mainus on Twitter: @DannyFrknMainus
Advertisement