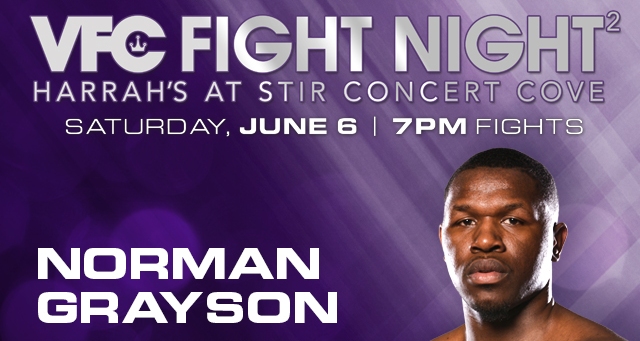 VFC Fight Night 2’s Norman Grayson: ‘Put Me in the Cage with a Bear, Don’t Help Me, Help the Bear!’

Adversity is a word used to describe unfortunate life circumstances. These difficult scenarios provide an individual an opportunity to make a choice: fight or flight.

For Norman Grayson, fighting was always his choice, whether it was good or bad.

When Grayson was an infant, his father was shot and paralyzed. This forced him to take care of his father and family, and grow up faster than expected. His trials and tribulations wouldn’t end there.

“I was 12 years old, getting shot at by older gang members just because my friends and I were playing basketball outside in the ‘wrong’ area,” recalled the North Omaha native of the gang activity and violence in his community.

After finding a love for football and boxing, Grayson parted ways with the streets and focused his efforts on school and athletics. However, in 2006, that all changed.

“I decided to play football and do track, but it seemed that all would come to an end when my sister was shot and paralyzed in 2009,” explained Grayson.

Grayson admits he turned back to “bad habits” where he, again, found himself associating with gang members. His coaches at Omaha Burke went to great efforts to get Grayson back on track and even called in Johnny Rogers to talk him into playing, but Grayson lost his fire.

“My heart just wasn’t in it anymore,” admitted the Nebraskan.

Grayson’s relapse led him back to the streets, and he developed a reputation for fighting.

“There were times I would walk into a party and people would come up to me and say, ‘Please don’t start a fight and ruin the party.’”

Not long after, Grayson hit rock bottom. He was facing criminal charges for his fighting ways. In an effort to do something different, Grayson joined the Army National Guard.

“After all charges were dismissed, I quickly had to try and find myself again,” said Grayson. “I knew that I wouldn’t be so lucky anymore and I could possibly end up in jail — or dead. So, I thought to myself, maybe I should use fighting for good.”

Hopeful that social media could guide him, Grayson used Facebook to find a gym to train for his MMA debut. Soon after, he met Danny Molina, the head coach at Skywalker 101 Boxing Academy. Molina, unsure of what to expect, has been pleased with Grayson’s progress in the gym.

“Norman is very coachable. He listens very well. He’s like a sponge and works very hard too,” said Molina. “I’m never surprised if he’s already had two workouts before he meets with me at 8 a.m. for our private lesson. He always has a positive attitude and is always willing to help his teammates.”

Since making a commitment to MMA, Grayson says he has a new perspective.

Grayson has only been formally training a few months, but he is setting his sights high when it comes to success in the sport. He wants to make it to the UFC, but he knows he has some work to do to get there. His game plan is simple.

“I just want to win and fight! It’s what I love doing,” proclaimed the fighter. “I feel like my strengths are my striking skills and strength. I’ve had some really strong guys try and grapple with me and they really couldn’t get far. And these were some high-level wrestlers and jiu-jitsu guys.”

Strength aside, Grayson has a lot of faith in his coach and feels his fight camp has prepared him for anything.

“Working with Danny is unbelievable. He really knows his stuff when it comes to fighting. He has prepared me mentally and physically to compete at a high level by improving my strengths and weaknesses. His strength and conditioning drills are a killer, and so is his mitt work,” said Grayson.

Grayson isn’t sure who he will share the cage with on June 6 at VFC Fight Night 2, but he isn’t worried about who shows up. He’s not the type for pre-fight jitters.

“Even if they put me in the cage with a bear, don’t help me, help the bear!” he exclaimed. “If I go into my fight nervous or scared, then my opponent better run for his life. When I get scared, I believe in do or die.”