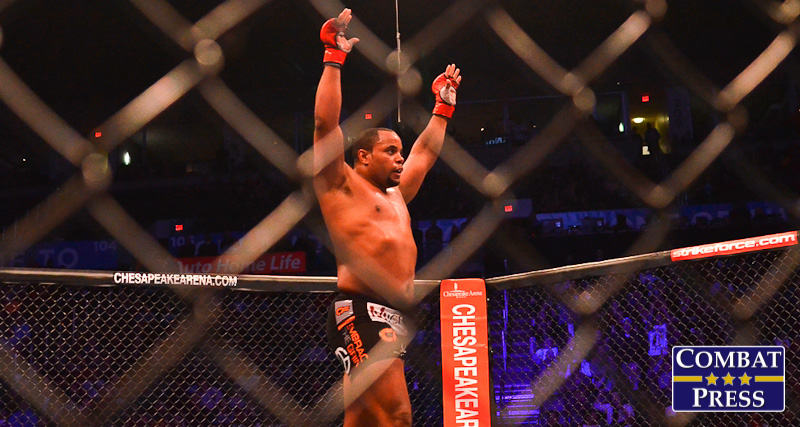 There’s a new titleholder at 205 pounds as Daniel Cormier submitted Anthony “Rumble” Johnson to claim the vacant light heavyweight belt. Johnson delivered a thundering right hand seconds into the fight that dropped Cormier. Cormier quickly recovered and worked for a takedown. Johnson fought hard to stay upright and delivered a series of head kicks. The second round saw Cormier earn a big takedown in the center of the cage. Once on top, Cormier went to work with elbows and punches and threatened with a kimura. The work from Cormier zapped the energy from Johnson and in round three, Johnson had nothing left. Cormier took his back and locked up the fight-finishing rear-naked choke to capture the championship.

The middleweight title stayed around the waist of Chris Weidman after he stopped Brazilian Vitor Belfort via first-round TKO. Belfort landed a big right hand early and flurried hard along the cage. The punches opened a big cut over the left eye of the champion, but he was undeterred. As Belfort came forward, Weidman scored with a big takedown. Once on top, he quickly moved to mount and rained punches. Belfort turtled up on the bottom and referee Herb Dean stepped in to halt the onslaught.

Donald Cerrone continued his path toward a title shot, stopping late-notice opponent John Makdessi with a massive head kick in round two. Cerrone battered Makdessi with kicks in the opening minutes of the fight, but Makdessi took the shots well. As the fight progressed, Makdessi countered with punches, but Cerrone mixed up his attacks. In round two, the knees and elbows of Cerrone found their mark. Late in the stanza, Cerrone unleashed a left head kick that connected flush with Makdessi’s jaw. As soon as it landed, Makdessi motioned for a time out and the fight was stopped. The Canadian revealed he had suffered a broken jaw from the strike.

Heavyweights Andrei Arlovski and Travis Browne put on a show, with Arlovski earning a first-round TKO win over his former training partner. Arlovski rocked the towering Hawaiian with a right hand early in the fight. The former champion was patient and when Browne recovered, he wobbled him again. Browne was on rubber legs and Arlovski sent him crashing to the mat with a backfist. As Arlovski looked for the finish, Browne fired back with a huge shot that dropped Arlovski. He flurried to finish, but Arlovski recovered and went for the kill. Browne absorbed heavy shots along the fence and the referee intervened.

Former flyweight title challengers Joseph Benavidez and John Moraga went to war for three rounds with Benavidez leaving with a decision win. Moraga connected with a head kick early, but Benavidez answered with a heavy punch that sent Moraga to the ground. Once on top, Benavidez took control. Round two saw Moraga again use his kicks, but Benavidez again scored with a takedown. It was more of the same in round three, as Benavidez sealed the win.

In a battle of top-1o flyweights, former title challenger and The Ultimate Fighter winner John Dodson did just enough to edge Zach Makovsky on the scorecards. Makovsky found a home for his straight left early in the fight and kept Dodson from executing his explosive offense. In round two, Makovsky earned a brief takedown, but Dodson responded with a huge slam. Round three was close, but Dodson opened up late and took home the win.

South Korea’s Dong Hyun Kim used his grappling prowess to dominate Josh Burkman and earn a third-round submission win. Kim took Burkman’s back while standing in round one and looked for a rear-naked choke. Burkman survived, but fared even worse in round two as Kim delivered a steady diet of left hands. The final round saw Burkman go for broke, but Kim survived the onslaught and took the fight to the ground once more. He slapped on an arm-triangle and finished the fight.

Middleweight Rafael Natal claimed a split decision win over Uriah Hall in a back-and-forth affair. Hall used his kicking game to control the opening round. Natal responded in round two with a takedown. Round three was very close, but two of the three judges rewarded the Brazilian for his efforts.

The wrestling game of Colby Covington proved to be too much for veteran Mike Pyle, as Covington scored a unanimous decision win. Pyle was forced to defend takedown attempts from the opening bell and as the fight progressed, Covington was able to control the fight from the top position. Pyle used a kimura to sweep late in the fight and locked in a deep choke attempt. Covington escaped and earned the victory.

In a battle of debuting fighters, Islam Makhachev submitted Leo Kuntz in round two. Makhachev scored with his sambo in the opening frame, putting Kuntz on the mat multiple times. In round two, Makhachev landed a short hook that appeared to rock Kuntz. He quickly transitioned to the back of Kuntz and locked in a rear-naked choke.

Flyweight Justin Scoggins got back in the win column with a unanimous decision win over Josh Sampo. Scoggins showcased a diverse kicking arsenal to keep Sampo at range through the majority of the fight. He scored with a hook kick in round two that briefly buckled Sampo. Sampo’s offense was stifled throughout and Scoggins cruised to the win on the scorecards.