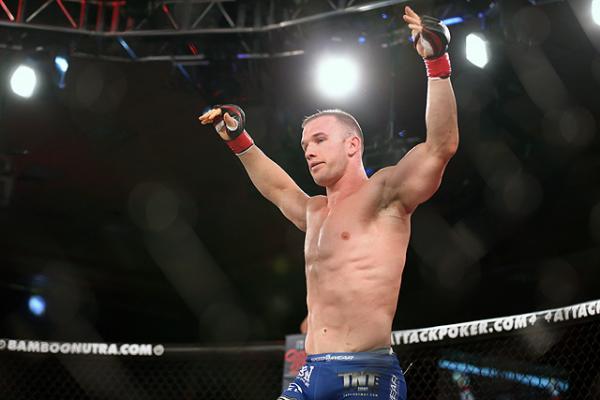 Bellator returns to action after a month off for Bellator 137 at Pechanga Resort and Casino in Temecula, Calif. Bellator 137 holds a four-fight main card with another nine fights on the preliminary bill.

In the co-main event, former Bellator featherweight champion Eduardo Dantas looks to get back into the win column when he goes up against Mike Richman. Dantas lost his featherweight belt in his last fight against Joe Warren. Richman has won his last two fights with first-round knockouts of Ed West and Nam Phan. The winner of this fight could stake their own claim to the next featherweight title shot.

The main card also houses a welterweight battle between Fernando Gonzalez and Curtis Millender, as well as a featherweight clash that pits the undefeated Darrion Caldwell against Rafael Silva.

Halsey claimed the title with an impressive finish of Alexander Shlemenko at Bellator 126. Halsey was huge compared to Shlemenko, and he utterly dominated the Russian. It was a signature win for Halsey, who established himself as an elite middleweight in Bellator. The Shlemenko fight showed a lot in the mere 35 seconds it took for Halsey to submit the champ with a rear-naked choke. Shlemenko hasn’t been an easy out in Bellator, but Halsey put him away quickly.

Halsey will look for the takedown in this fight, but it’s no easy task against somebody like Grove. The UFC veteran has a tremendous reach advantage that could allow him to keep Halsey at distance. However, Grove hasn’t been a master of maintaining and using range to his advantage in his career.

Grove will most likely work toward a decision victory while using his striking to keep Halsey as far away as possible. That is really the only way the UFC vet can win this fight, unless Halsey lands a takedown and Grove uses his long limbs to lock in a triangle or an armbar. We could see a lot of rubber guard for Grove in this fight if it does go to the canvas. Those are really Grove’s only options — either control the distance or hope Halsey slips up.

Halsey won’t slip up, though. He seems to be the real deal as far as a middleweight champion goes for Bellator. Grove does have the experience edge, but it will be Halsey who gets the unanimous nod.

We could be looking at the next featherweight title challenger when the dust settles in the co-headliner between former featherweight champion Eduardo Dantas and top contender Mike Richman.

This is an excellent fight that pairs two guys who play very well into each other’s styles. Richman has power in his hands and can end the fight with one punch. Dantas is a striker, too, but he relies on overwhelming opponents with his volume.

Dantas is 2-2 in his last four fights, but that is stretched out over almost three years. The Brazilian returned to action in October at Bellator 128 against Joe Warren and did not seem to be his typical self in terms of his striking. Warren controlled the stand-up and used it to set up the takedown. It led to some very interesting grappling exchanges between the two men, but Dantas dropped the five-round decision.

Dantas can’t fight the same way in this encounter. A timid approach won’t serve him well. He needs to control the striking in this fight. Richman can end the fight at any moment with his fists, and if Dantas allows him the space to create something, Richman will capitalize — just ask Nam Phan, whom Richman knocked out in his last fight. Richman looked great in the short amount of cage time against Phan.

Richman could add another knockout to the nine he already has on his resume. However, he is also the smaller fighter here, which could help Dantas if the Brazilian decides to use his range to control the striking. Warren was able to break through and land on Dantas, which raises some red flags. Richman isn’t a guy you want to allow to really get on the inside. Dantas should be able to control the distance, but this is genuinely a tossup where either man could emerge with the win.

Curtis Millender’s perfect record ended in his last fight when he succumbed to a rear-naked choke from Brennan Ward. Millender will look to right the ship against Fernando Gonzalez, who is riding a three-fight winning streak.

Millender was able to control the striking in the early portion of his fight against Ward. He looked like he was going to be able to hang tough, even cutting open Ward. However, Millender got caught and dropped to the mat. Then, Ward quickly wrapped up Millender to solidify the victory. Millender has a wrestling background and, as he demonstrated against Ward, he can dictate the pace in the striking battle. The problem is consistency in that control.

I actually had predicted that Gonzalez would beat Marius Zaromskis when the two met at Bellator 132. Zaromskis seemed to be on the back nine of his career and Gonzalez was looking pretty good in his last couple of fights. Gonzalez tends to experience these highs in his career. He hasn’t won more than three consecutive fights since 2005, though. He has reached three straight victories a few times since then, but he always lost the next fight. The law of averages might be in effect here.

The dictation of the pace is becoming a big theme here. Gonzalez has been very good at controlling the pace in his Bellator appearances. He displayed it against Zaromskis and, after a high-octane first round, settled the fight with a very clearly slow and tired Zaromskis trying to strike back.

Gonzalez should have finished Zaromskis, but Zaromskis’s chin held up. Millender is going to need to display some strength if he fails to bring the fight to the mat or allows Gonzalez to slowly settle into a rhythm.

It’s time for Gonzalez to finally break through and get a fourth consecutive victory.

This featherweight showdown between Darrion Caldwell and Rafael Silva is a tough pick for a few reasons. Primarily, the outcome depends on who dominates the grappling exchanges and lands the first takedown.

Silva and Caldwell rely on a smothering top game to defeat their opponents. It isn’t the typical blanket strategy, though, as both guys look for the submission and the finish.

Caldwell has high-level wrestling developed in his NCAA Division I days. Obviously, with that pedigree, Caldwell should be pretty adept at stopping the takedown and imposing his will on his opponent.

The one thing keeping Silva in the running is his higher levels of experience in MMA. Caldwell has the collegiate wrestling experience, but the wrestler has only six professional fights on his record and no big wins yet. Silva, who has 26 fights on his resume, is that test for the 27-year-old.

Silva has fought some good competition. The 30-year-old fought Joe Warren in the interim featherweight title fight. He ended up losing the decision in what was an otherwise top-heavy game plan from Warren. The Brazilian has also locked horns with the likes of John Lineker and Anthony Leone. Caldwell isn’t another Joe Warren, at least not yet. Warren has fought some of the best to fight in Bellator, and Caldwell still has a little ways to go to find that level of success.

Caldwell will enjoy a nice three-inch height advantage in this fight. The size edge could help push the fight in his favor.

My colleague, Wayne Dumas, spoke with Caldwell — you can read the interview here — and inspires confidence in the undefeated prospect. Caldwell’s head is in a good place, and he’ll get the decision against Silva.