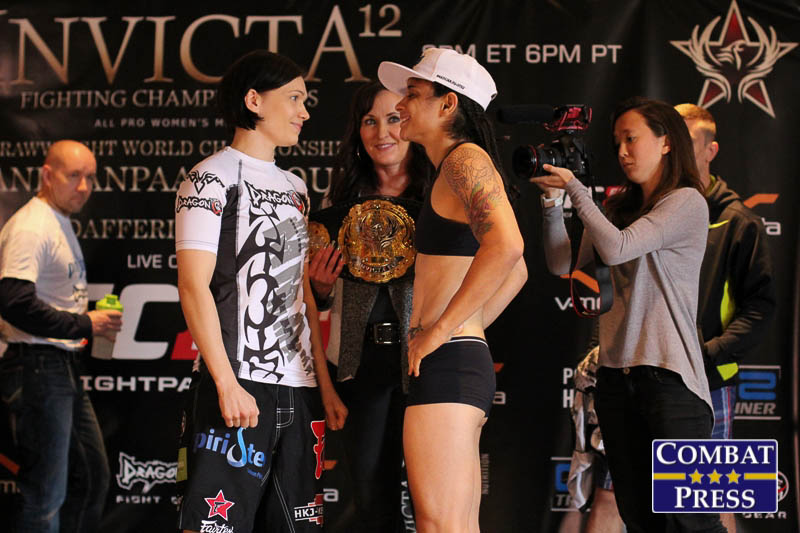 Kankaanpää captured Invicta gold at Invicta FC 8 in September with a fifth-round submission win over Stephanie Eggink. The 33-year-old had amassed 10 wins in her 12 career fights and will look to defend her 115-pound belt for the first time. The “Killer Bunny” had tasted defeat just once, against current UFC fighter Joanne Calderwood at Invicta FC 7.

The Brazilian Souza entered the contest with an unblemished, 7-0 record. Six of the 24-year-old’s wins had come via submission, including five in the first round. The fight with Kankaanpää wasSouza’s promotional debut, as well as her first bout outside of her native Brazil.

In the night’s co-main event, flyweight Roxanne Modafferi squared off with Brazilian Vanessa Porto. The pair met previously in 2008, with Modafferi earning a third-round TKO victory. Modafferi had earned back-to-back wins inside the Invicta cage, earning decisions over Tara LaRosa and Andrea Lee. Porto, who challenged for the Invicta title at Invicta FC 5, also rode a two-fight winning streak, including a decision win over Zoila Frausto at Invicta FC 7.

There’s a new champion in the Invicta strawweight division as Brazil’s Livia Renata Souza submitted Finland’s Katja Kankaanpää in the fourth round. Souza attacked the champion from the opening bell, taking the fight to the ground and taking Kankaanpää’s back. Kankaanpää showed heart and defended the rear-naked choke attempts. The momentum swung toward Kankaanpää as the fight progressed. She used a smothering top game in the middle frames, delivering short shots and keeping Souza from mounting offense. In round four, Souza again found herself on her back, but she slapped on a triangle choke and Kankaanpää was forced to tap and relinquish her belt.

Brazilian Vanessa Porto exacted revenge on Roxanne Modafferi, claiming a decision win in the pair’s rematch. Porto used her leg kicks to slow Modafferi’s movement and mixed in takedowns in each of the first two rounds. Modafferi countered with flurries, bloodying the nose of Porto. A right hand from Porto clipped Modafferi in round two, but she survived and pushed hard in the third round. Modafferi’s efforts were not enough as Porto took the fight on the judges’ scorecards.

New Zealand’s Faith Van Duin earned a big win in her Invicta debut, submitting Amanda Bell in the second round with a schoolyard choke. Van Duin put Bell on the mat early in the fight and threatened with an armbar. Bell escaped and reversed the position, dropping big hammerfists on the Kiwi. In the second round, Van Duin caught a kick and took Bell down again. She locked onto Bell’s neck and coerced a tap.

Raquel Pa’aluhi continued her march up the bantamweight ladder, edging Brazilian Ediane Gomes by unanimous decision. The Hawaiian scored with right hands and a big throw in the opening stanza, but Gomes countered with a heel hook attempt. In round two, Pa’aluhi hurt Gomes badly with a body shot and flurried for a finish. Gomes recovered and put together a strong final round. It wasn’t enough, however, as Pa’aluhi took home the victory on the scorecards.

Featherweight Latoya Walker remained unbeaten, edging Peggy Morgan by unanimous decision. Morgan used her reach to keep Walker at bay early, but Walker found her range and connected repeatedly with her overhand right. She rocked Morgan badly in round two, but could not find the finish. Morgan’s face wore the damage from Walker’s heavy shots as the fight went the distance.

Lacey Schuckman returned to the Invicta cage and needed less than two minutes to score a TKO win over Jenny Liou. Schuckman was aggressive early with her strikes, wobbling Liou with a flurry. She was patient with her follow-up punches, battering Liou against the cage and forcing the stoppage.

In her Invicta debut, strawweight Sharon Jacobson used a mix of aggressive striking and powerful wrestling to defeat a scrappy Delaney Owen. Jacobson overpowered Owen early, but Owen showed resolve and clipped Jacobson with a heavy shot that damaged her right eye. Jacobson went to her wrestling game and was able to claim a sweep on the scorecards.

In a battle of promotional newcomers, Sijara Eubanks used her grappling prowess to set up a finish with her hands, handing Gina Begley a first-round TKO loss. Begley scored early on the feet, but once Eubanks took the fight to the mat, Eubanks delivered heavy shots and forced the referee to intervene.