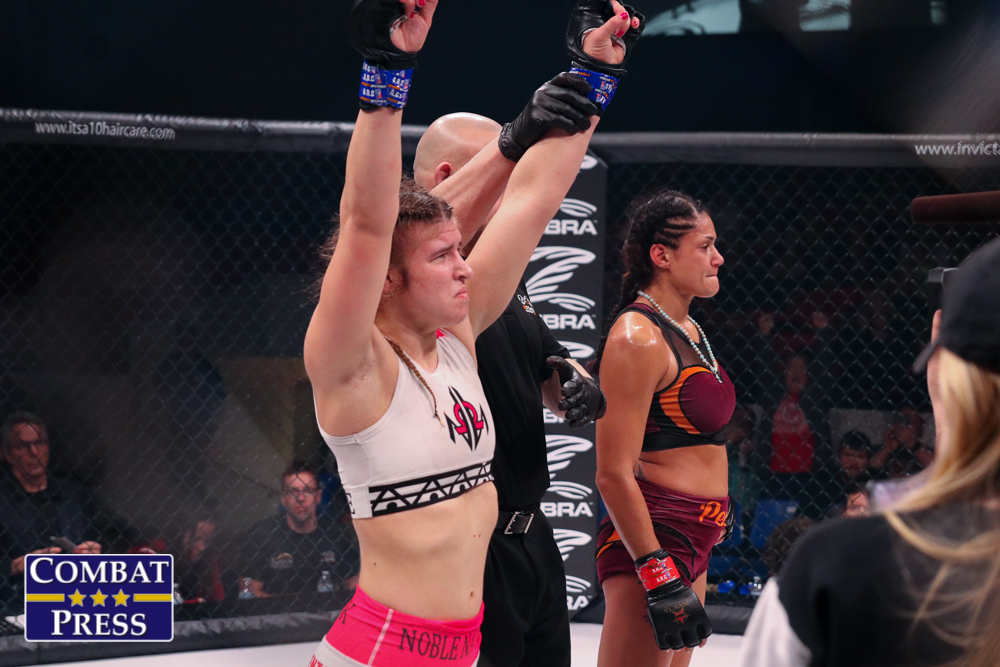 UFC 254 provided us with two female bouts. While neither made it to even a third round, both were fun while they lasted. We had Lauren Murphy stake her claim to a flyweight title shot with a victory over Liliya Shakirova, while Miranda Maverick took out Liana Jojua. Let’s get into these fights.

One thing I saw watching the video of Shakirova is that she can get in, close the distance, and get the clinch, but her control in that clinch is a weak spot. She can be taken down even when her opponent is the one against the cage. That played out here, allowing Murphy to defeat Shakirova via rear-naked choke in round two.

In the first round, Shakirova was doing a lot of moving, but she was not moving forward as I had seen while watching video of her previous outings. I don’t know if the play was to tire out Murphy or maybe draw her in and hope to land counters. If the plan was to try to tire her out though, I am not sure about that idea, because that isn’t going to happen with Murphy. If the plan was to try to land counters and get angle on a moving Murphy, that didn’t work.

Murphy fought a very smart fight. As Shakirova moved and circled, Murphy did a great job of not chasing. Instead, she cut the cage off and was able to land strikes. So, in a sense, Shakirova actually was at times limiting her space to escape punches, because, as she moved, Murphy moved with her and cut in half where Shakirova could move to. Shakirova did land a couple of her own, but mostly it was Murphy landing. Then they clinched and, as expected, Murphy was clearly the bigger and stronger fighter. What I predicted turned out to be true: Shakirova has a weakness in controlling the clinch. Shakirova might have been smart to throw more leg kicks in that first round — maybe damage those legs and slow down any forward movement from Murphy.

Round two was the same as the first until they clinched and Murphy got the takedown. Shakirova is tough. She’s not going to go away easily, but she can be put in different submissions. Murphy seized the opportunity and got the choke. Shakirova had to tap.

What’s next for Murphy? Clearly, in her mind, it should be a title shot. You know what? I agree. She deserves the next shot at the winner of the fight between Valentina Shevchenko and Jennifer Maia. Murphy has won her last four, including two by stoppage, and her impressive 14-4 record includes a decision loss or two that could just as easily have gone her way. Some feel Jéssica Andrade should get the next shot — and a case can be made for it — but Murphy should get the next one.

I said in my preview that Maverick was the big favorite, and she had every reason to be — she ended up taking the TKO victory by doctor’s stoppage at the end of the first round. However, I also hinted that Jojua was sort of being overlooked.

In talking to the media afterwards, Maverick said she wanted to show she had more than just a ground game. She just hadn’t had any reason to show it. She wanted to do so in this fight. I am a big believer that there is no need to show something until you have to show it. To use myself as an example, I was fine being known as “a grappler,” because then when it was time to show I can stand and bang, it wasn’t expected.

Maverick’s desire to show that she could stand was evident right off the bat, as both ladies came out throwing. Initially Jojua actually landed some very nice strikes and made you think that the bout was going to go in a way that she’d want it to go. She looked really good. Then, Maverick got into her groove and started landing some good ones of her own. When they were exchanging in close, Maverick was definitely getting the better of it. Neither landed anything that seemed “fight ending,” but both — especially Maverick — were landing some good ones that were doing some damage. The highlight was a couple of really nice elbows that Maverick landed, the last of which opened a bad cut on Jojua’s nose.

Maverick won the round, but then she won even more when the doctor stopped the fight. Was the cut one that should have brought an end to the fight? It’s tough to say. It did look pretty bad, but it didn’t seem to be in a bad area. However, when we say a cut is or isn’t bad enough to stop a fight, we do need to understand that the doctor is in closer and can look right at, and even into, the cut and see its severity. I’ve seen cuts up close at events that I was fighting on and backstage said “that looks really bad.” Then, when I saw photos of it, it didn’t look as bad.

You have to feel bad for Jojua, because as fighters we never want to lose that way. If you are going to beat us, then beat us. We don’t want to lose because a doctor makes that determination. However, this does not take anything away from Maverick. It was her elbow that opened the cut and forced the stoppage. It was stopped because of a blow she landed. Afterwards, Maverick said she was upset it was stopped, because she wanted to show more and she wanted to stop it herself. I get that. It makes sense. However, the positive is that she only had to fight one round, got a win, and came out unharmed. This opens the door for her to be able to get back in there fairly soon.

What’s next for Maverick? What about someone like JJ Aldrich? Aldrich has dropped two of her last three, but one was a split decision to Sabina Mazo and she was doing very well in the other before she lost in round two to Maycee Barber. Aldrich is someone UFC fans know, and she would provide the tough veteran opponent that Maverick needs.