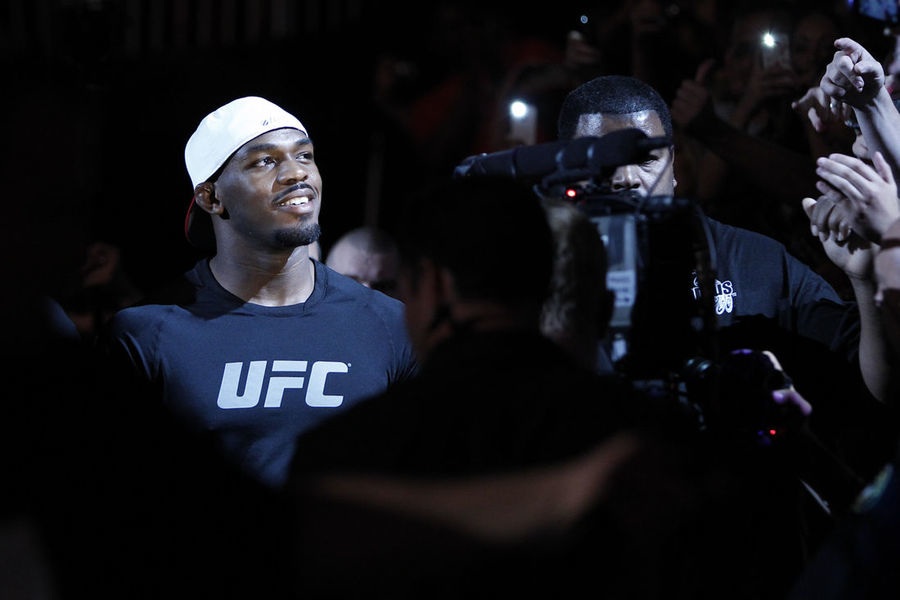 UFC 182 Results: Jones Too Much For Cormier, Cerrone Cruises Past Jury

The reign of light heavyweight champion Jon Jones continues, as the 205-pound king outworked the previously undefeated Daniel Cormier to retain his title. Despite a 12-inch reach advantage, Jones could not keep Cormier at range. Cormier was able to get inside and land uppercuts. However, Jones did just enough to take the first frame with a takedown. Cormier increased his pressure in round two, battering Jones from close quarters. The champion showed his resolve, landing elbows and kicks in the middle stanza. Round four was all Jones as he took Cormier down multiple times as the pace slowed. The final frame was a war of attrition, but the workrate of Jones was simply too much for the challenger. Jones kept his belt with 49-46 scores across the board.

Veteran Donald Cerrone showed why he’s considered one of the best lightweights in the world, handing Myles Jury the first official loss of his career. The TUF alum Jury caught a kick from Cerrone and earned a takedown. Cerrone attacked with an omoplata and swept into side control. As Jury tried to scramble, Cerrone took his back and secured a body triangle. Jury was able to defend the rear-naked choke attempt and a late armbar. The final two rounds were all Cerrone on the feet, as he used his Muay Thai and excellent takedown defense to cruise past Jury and earn the win on the scorecards.

Middleweight Brad Tavares used a stiff jab and solid leg kicks to edge former Strikeforce champion Nate Marquardt by unanimous decision. Marquardt landed inside leg kicks early, but Tavares found his range and landed punches. A front kick from Marquardt connected, but Tavares was unfazed. In round two, the outside leg kicks of Tavares really slowed Marquardt’s movement, allowing the Hawaiian to score with his hands. Round three was more of the same as Tavares cruised to victory.

Japanese flyweight Kyoji Horiguchi used his speed advantage to outwork Louis Gaudinot and claim a decision win. Gaudinot was the aggressor early, stalking Horiguchi around the cage. Horiguchi scored with counters in a hard-fought round. In the final two rounds, Horiguchi poured it on standing. Gaudinot desperately looked for submissions and tried to pull guard, but Horiguchi easily escaped and delivered strong right hands. Gaudinot made it the distance, but fell short in the eyes of the judges.

Hector Lombard gave fellow welterweight Josh Burkman a rude welcome back to the Octagon, earning a unanimous decision win. Lombard came forward immediately, but Burkman was able to score with counter punches. Lombard was undeterred, picking his spots to attack. The kicks of Lombard slowed Burkman’s offense as the fight wore on, allowing Lombard to connect with his hands. In the third round, Burkman’s chin was put to the test, as Lombard unleashed combinations along the fence. Burkman survived the onslaught, but fell short on the scorecards.

The final prelim saw lightweight Paul Felder demolish Danny Castillo in round two via spinning backfist. Felder frustrated Castillo throughout the opening frame with a variety of strikes. Felder mixed in kicks and knees to keep Castillo at range. In round two, Castillo moved forward aggressively, but ran straight into the backfist and crashed to the canvas unconscious.

In his promotional debut, 23-year-old Cody Garbrandt remained unbeaten with a third-round stoppage of Marcus Brimage. Garbrandt’s striking advantage was apparent right off the bat, as he peppered Brimage with punches. Late in the first round, Garbrandt rocked Brimage, but the bell saved him. Round two was close, but Garbrandt’s counterstriking was the difference in the final stanza. A late flurry dropped Brimage again and referee Herb Dean stepped in to hand Garbrandt the win.

Heavyweight Shawn Jordan emphatically spoiled the debut of Alaska’s Jared Cannonier, scoring a violent, first-round finish. The pair traded single shots early in the fight as they looked to find their range. Late in the opening stanza, Jordan delivered a right hook over the top that sent Cannonier crashing to the mat. A flurry of punches later and the referee was forced to peel Jordan off Cannonier’s unconscious body.

Kicking off the televised portion of the card, lightweight Evan Dunham used his reach and boxing to dominate Brazilian Rodrigo Damm from bell-to-bell. Damm had no answer for Dunham’s jab early in the fight and as the fight progressed, Dunham’s workrate wore down Damm. By the final horn, Damm’s face was bloodied and Dunham earned a clear-cut decision win.

Welterweight Omari Akhmedov got back in the win column, topping Sweden’s Mats Nilsson by unanimous decision. Akhmedov used an aggressive attack and well-timed takedown to stifle the Swede through the first two rounds. However, the Dagestani fighter slowed significantly in the final stanza, allowing Nilsson to nearly steal the bout. Akhmedov managed to survive and took the judges’ nod.

Bantamweight Marion Reneau impressed in her Octagon debut and made opponent Alexis Dufresne pay for missing weight, earning a lopsided decision win. Reneau’s striking prowess was evident from the opening bell, as she battered Dufresne. Dufresne made multiple half-hearted attempts to secure a takedown, but Reneau shrugged her away. The one-sided beatdown earned Reneau scorecards of 30-26, 30-26 and 30-25 from the judges at cageside.