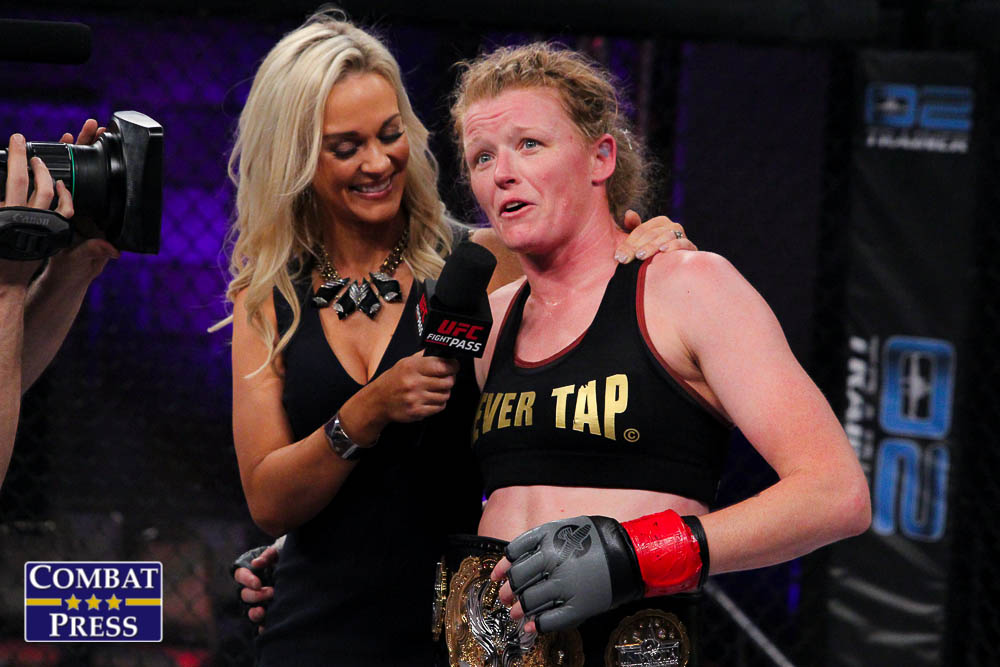 UFC 214’s Tonya Evinger: The Bully Has A New Playground

Tonya Evinger is finally in the UFC.

After more than 11 years as a professional fighter, facing off against top opponent after opponent, she’s here. Hopefully, you don’t need an introduction, but here’s one just in case. Evinger’s already earned the right to be called one of the best in the world. She’s spilled blood across arenas in the United States. She fought seven times in just her second year of fighting, and that was back in 2007. She’s currently undefeated through her last 11 fights, spanning six years. She’s snatched victory from her every opponent’s mind time and time again and left them broken and battered from a filthy, grinding approach.

Evinger’s arrival in the UFC is something that should’ve happened years ago. It took a wild string of events for it to come to fruition, though. A change of UFC ownership. A titleholder that didn’t want to defend her title. A fighter who accepted a fight and then had to back out just a few weeks later. It all happened, and now she’s here. In one month, Evinger will grace the biggest stage of her fight career. She’ll do so against Cristiane “Cyborg” Justino.

“I accepted the fight last Thursday. Fast. Obviously, they called and said, ‘Hey, would you take this fight against…’ and I said, ‘Yes.’ You know me, I’ve been waiting for so long,” Evinger told Combat Press. “And I’m not a person to turn down fights. But I always knew it was gonna be this fight. I just didn’t think [the UFC] would bring me over with such a big record and just give me some regular fights. I knew it would have to be a big fight and it was going to be against Cyborg. I think we’re obviously two of the best in the world. Both of us have been undefeated for a long time, so this is a great fight.”

If you’ve just accepted the biggest fight of your career, what do you do? Tell everyone you know, right? At least your coaches? Nope, not Evinger.

“It was crazy, because I didn’t tell anyone shit,” Evinger explained. “I kept it from everybody, and it was tough. I felt like if I said something about it, it jinxes me and the fight doesn’t happen, and I love giving a little bit of torture to my coaches and whoever else and letting them hear by the media. It brings a little joy into my life.”

If you know Evinger, this move isn’t that surprising. She does things her way. Always has, always will. It’s what has made her so appealing to fans and allowed her to build up a strong, passionate fan base.

“What made it easy was, I was already lined up to fight for Invicta,” said Evinger. “There was kind of a little bit of question from them, because I did step my training back a couple of weeks with my strength and conditioning. I started to do things a bit different. My behavior may have been a little different, but I tried to keep my mouth shut, my emotions down, not get overwhelmed, and let the fight get announced the way it did.

“They’re ecstatic. This is a fight that I think my whole team has wanted. They want to see me tested and they want to see me fight tough girls, and we want to prove something out there. This is a fight that will set in stone everything that I’ve done, so I just gonna win it, man. We’ve all been working super hard to get where we are and it’s finally come around. It’s our turn.”

Evinger has spent the past four years fighting for the Kansas City-based Invicta FC. It’s where her career resurgence began. It was a perfect match. One female pioneer for MMA fighting for a promoter, Shannon Knapp, who would become one as well. It’s the Invicta stage that has prepared Evinger for this moment and left her to believe she’ll be able to deal emotionally with what’s ahead.

“I think it’s because I’ve fought for Invicta for so long, and I truly do think they’re one of the best promotions in the world,” said Evinger. “I think it’s been nothing but getting me prepared for this. And I don’t see the girls [in the UFC] being any more talented than the girls I’ve fought in Invicta. I just think the title alone and the opponents they’ve given me to have to defend my title against, it’s been overwhelming. But to learn to have to deal with that and just go in there and fight has helped me. I feel Invicta is a huge stage to fight on. The pressure was already there, and I’ve had to learn to deal with it and get through it and just fight. I just took an opportunity Shannon gave me and it’s gotten me to where I’m at.”

Now, Evinger is in a co-headlining slot on one of the biggest pay-per-views in some time. She fights on July 29th in Anaheim, Calif., at UFC 214. Evinger vies for a title against one of the most dominant and feared competitors around. Evinger, who normally competes as a bantamweight nowadays, will also step up to compete in a division foreign to her, the 145-pound weight class. Does she have a chance? What can she offer that Cyborg hasn’t already handled?

“I don’t think anyone is going to fight her style-wise like I’m going to,” said Evinger. “And I think our styles are almost completely opposite, yet we still have that same aggression. I have that grind — I’m tough and you don’t see me get beat up. I have a style that just favors me winning all the time. I don’t take damage and yet I’m able to dominate. I think I’m a super, super smart fighter when it comes down to it. I’m able to adapt in the cage in certain situations and fight from any position. I choose to fight a certain way in my fights because it’s the easiest route.

“I’m there to win. I’m not there to go five rounds. I’m there to finish you. I’m going to take it to the easiest place for me and the hardest place for you. Most of the time, that’s on the ground beating them up, but obviously, I’m willing to get on my feet and fight too. I just think that’s something that she hasn’t come across yet. She’s fought so many great girls, but stylistically, they’ve fought her fight.”

Over the next few weeks, fans and analysts will offer up plenty of commentary and fight breakdowns. Evinger just treats it all as business as usual.

“My goals are the same [as] they’ve been,” said Evinger. “It’s to win fights and stay on top and become the best fighter in the world”

The UFC is Evinger’s playground now.