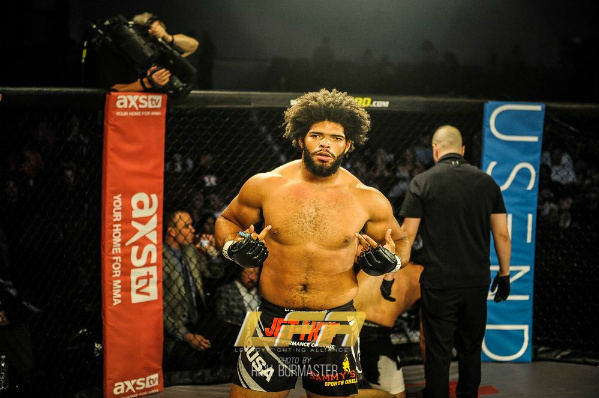 With the Super Bowl just under two weeks away, Legacy Fighting Alliance heavyweight Juan Adams finds himself torn. The longtime Philadelphia Eagles fan who grew up in Houston is no doubt thrilled that his team is once again in the big game. However, he doesn’t see the Eagles getting past their old nemesis, New England.

“I think the Patriots will go all the way,” Adams told Combat Press.

The Houston native also grew up rooting for the Texans when the team came to the city in 2002. Adams was very active in athletics during his youth. He competed in basketball, wrestling, swimming, and track and field. Although Adams now stands at 6-foot-5 and often has to cut weight before his fights, his growth spurt came a little later than usual.

“I didn’t hit 6[-foot-]5 until after my freshman year of high school,” Adams said. “I was 5-foot-9 and 160 pounds when I entered high school, and I made it up to 180 pounds and was having issues making weight for junior varsity wrestling. One night I woke up screaming because I felt my legs burning. I grew six inches and 70 pounds while I was in high school, and I grew another inch in college.”

Adams’ rapid growth lent itself to his burgeoning wrestling career. He received a scholarship from Virginia Military Institute and considered following in his grandfather’s footsteps by joining the Armed Forces. However, shoulder surgery resulted in a medical disqualification for Adams and allowed him to pursue his other love — football — albeit briefly.

“Both the Indianapolis Colts and [Green Bay] Packers showed interest, along with some other teams, but they wanted to wait another year before signing me,” Adams said.

It was then that Adams decided to use his experience in wrestling to make the transition to mixed martial arts.

“A lot of styles in wrestling can translate to MMA,” said Adams, whose pro MMA record now sits at 2-0. “I can have top-heavy control on a guy and pound him out. I’m very aware of my body and how it works, and I can apply it to my fighting style. I’m always looking to inflict damage and I’m also willing to work hard. I like to treat MMA as a science.”

The 26-year-old Adams, who goes by the moniker “The Kraken,” definitely seems to have figured out the science of fighting, as evidenced by his undefeated six-fight career spanning the amateur and professional ranks. Every fight of Adams has ended in a knockout, with four of those finishes coming in the first round. But if you ask Adams, he still has plenty of room to grow, figuratively speaking.

“I can still work on my striking,” he said. “I’ve only done it for about a year, and I train with professional boxers, so I’m always growing and adapting.”

Despite his massive size, Adams actually finds cutting weight to the 265-pound heavyweight limit to be rather easy due to his low body fat.

“I can cut more water weight, and it’s easier for me to fluctuate my weight,” Adams said. “Ten percent of cutting water for me is equal to about 30 pounds. I also have more fat to burn, and more willpower.”

Adams’ run of dominance so far in MMA has come with an unexpected downside. Multiple potential opponents have withdrawn from fights against Adams.

“It’s both flattering and discouraging,” he said. “I train hard and I’ve sacrificed a lot. I work multiple jobs to make ends meet. It’s stressful, but I adapt and I’ll just take it out on my opponents. It just adds fuel to the fire.”

Adams turned pro with the LFA last year. He has already racked up two victories for the promotion. His next fight comes at LFA 32 on Friday, Jan. 26, against Dwight Gipson, who holds an 8-7 mark.

“LFA has been very accommodating to me, and I give them five stars out of five,” Adams said. “Props to [Gipson] for taking the fight, but a .500 fighter won’t beat me. I respect him, but he only has a puncher’s chance. I’ve trained hard and I know what I’m going to do.”

While Adams has business aspirations beyond fighting, he has talked about appearing on the Dana White’s Tuesday Night Contender Series and aims even higher than that — all the way to a full-time UFC contract and fights with some of the best heavyweights the promotion has to offer, including heavyweight champion Stipe Miocic and recent title challenger Francis Ngannou, who squared off at UFC 220 last weekend.

“There’s no heavyweight outside of the top five in the UFC who is a threat to me,” Adams said. “I watched a replay of that fight and I thought Stipe had the perfect game plan, and it was a learning experience for Ngannou. Respect to them, but they’re lucky my career is so young.”