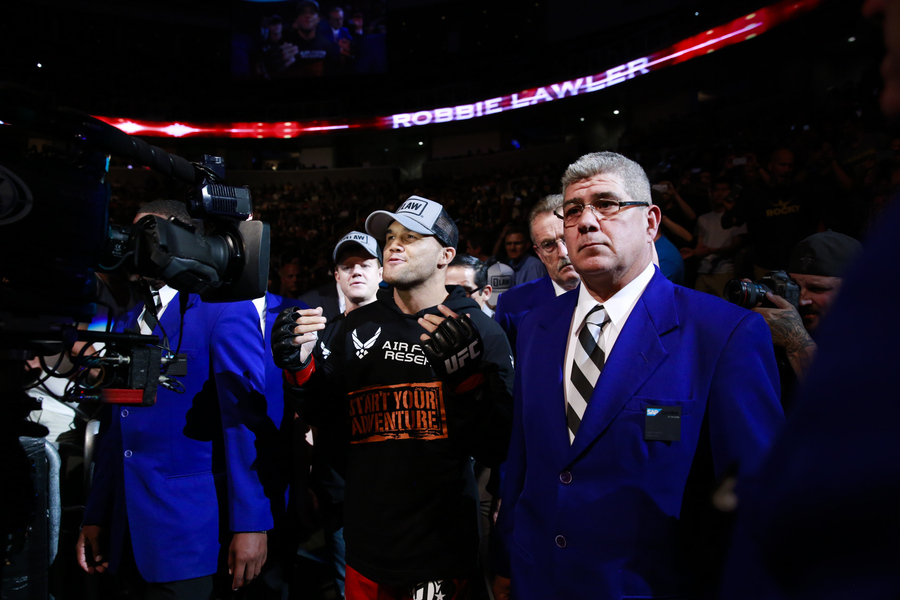 Robbie Lawler capped off a career resurgence by claiming the welterweight title in a hard-fought decision over Johny Hendricks. Lawler came out of the gates aggressively, looking to follow through on his promise to finish Hendricks in their championship rematch. Hendricks weathered the storm and got a late takedown. Hendricks performed better in the second stanza, where he started landing leg kicks and edging Lawler in the stand-up. He got a takedown, but Lawler landed a front kick to the face once the fight returned to the feet. Hendricks had his best showing in round three, where he turned up the volume on his striking attack and scored with takedowns. Round four was another close round, with Hendricks gaining the upper hand in the first portion of the round and Lawler striking late after stuffing a takedown. Lawler’s aggression returned in the final frame, especially in the closing minute of the round when he started hunting for the finish once again. The strong finish, combined with his work in rounds one and four, was enough to convince two judges to award the fight to Lawler. The longtime UFC and Strikeforce veteran is the new UFC welterweight champion.

Anthony Pettis retained his lightweight crown, returning from a long layoff to score a second-round submission finish of formidable challenger Gilbert Melendez. Melendez opened the fight by looking for takedowns and locking up Pettis in the clinch. Melendez continued the approach in round two, but he opened up more in striking exchanges with the champ. It turned out to be his downfall, as Pettis rocked Melendez. Melendez shot in for a takedown and Pettis snagged his neck. Pettis dropped down to sink in the guillotine choke and then rolled into mount. Melendez struggled to get free, but once Pettis rolled to mount, the Cesar Gracie product was forced to tap.

Travis Browne returned to the win column with an impressive finish of Brendan Schaub in their heavyweight clash. Browne connected with a violent uppercut in the first round. Browne continued to dominate as the fight went to the ground. He gained mount several times and took Schaub’s back, flattening out Schaub and raining down punches until referee Mario Yamasaki had seen enough. Browne claimed the TKO victory with just 10 seconds remaining in the opening stanza.

Todd Duffee wasted little time in announcing his return to the UFC’s Octagon. Duffee landed a big right hand that floored fellow heavyweight Anthony Hamilton at just 33 seconds of the first round for the knockout win.

In the first fight of the main card, Tony Ferguson weathered the early storm against fellow lightweight Abel Trujillo to earn a second-round stoppage win. Trujillo rocked Ferguson early and kept up an aggressive pace as he edged Ferguson on the feet, scored takedowns and worked from the top. However, Trujillo’s suspect gas tank cost him again. Trujillo faded in the closing minute of the first round. Ferguson gained the upper hand in the second stanza, outworking Trujillo, defending takedowns with ease and eventually taking Trujillo’s back. Ferguson found an opening once he had Trujillo’s back and sunk in the rear-naked choke for the finish.

Francisco Rivera was the victim of an unfortunate eye poke that was missed by referee Mario Yamasaki. Rivera was doing well in his bantamweight contest against Urijah Faber until an eye poke in round two sent him reeling. Faber pounced and locked in a rear-naked choke to coax a tapout from Rivera.

All it takes is one perfectly placed kick to change the direction of a fight. Middleweight Josh Samman proved that much in his outing against Eddie Gordon. With Gordon dominating the match with takedowns through more than a round and a half, Samman appeared to be on his way to a decision loss. Midway through the second round, Samman found himself standing with Gordon once again and took advantage of the opportunity to land a left foot to the head of Gordon. The kick immediately separated Gordon from consciousness, leaving Samman with the stunning comeback victory via knockout.

Justin “Lazy Bones” Jones may have a nickname that conjures comparisons to light heavyweight champion Jon Jones, but he wasn’t able to channel a performance comparable to one from the champ. Instead, Jones was dominated in the clinch and on the ground for the majority of his fight with Corey Anderson. Anderson, the light heavyweight winner of The Ultimate Fighter 19 cruised to a unanimous decision that included one 30-26 score.

Raquel Pennington clinched a win over Ashlee Evans-Smith with a stunning bulldog choke finish in the opening round. Evans-Smith used her strength to take control in the clinch and score an early takedown, but Pennington locked in a bulldog choke with just seconds left in the round. The choke left Evans-Smith unconscious as the referee separated the fighters at the bell.

Sergio Pettis overcame an early knockdown to score the victory in his bantamweight encounter with Matt Hobar. Pettis was rocked early in the first round and spent much of the round delivering upkicks from his back. Pettis turned it up in round two to dominate Hobar on the feet and continued to edge his opponent in the third round en route to a unanimous verdict.