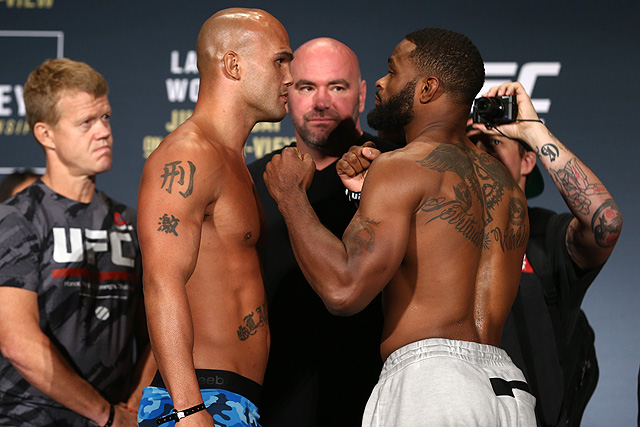 On Saturday, July 30, the UFC hosted UFC 201: Lawler vs. Woodley from the Philips Arena in Atlanta.

In the night’s main event, welterweight champion Robbie Lawler looked to continue his reign over the 170-pound division as he took on Tyron Woodley. The 34-year-old Lawler had won five straight, including back-to-back “Fight of the Year” performances against Carlos Condit and Rory MacDonald. Woodley, meanwhile, had won four of his last five Octagon appearances, most recently besting Kelvin Gastelum via decision at UFC 183 last January.

There’s another new UFC champion as Tyron Woodley knocked out Robbie Lawler to capture the welterweight belt. The pair were very patient in the fight’s opening minute as they gauged their distance. Woodley cut off the cage and delivered a lightning-fast right hand that dropped Lawler. A few follow-up punches and the referee was forced to intervene and hand Woodley the win.

Poland’s Karolina Kowalkiewicz stayed undefeated, besting former strawweight title challenger Rose Namajunas by decision. Namajunas showcased great movement in the first round, landing punches and kicks from the outside. Kowalkiewicz struggled to find her range in first five minutes. The momentum swung toward Kowalkiewicz in round two as she was able to initiate the clinch and batter Namajunas with knees and elbows. Round three was more of the same as Kowalkiewicz’s clinch work slowed the attack of Namajunas and handed her the win on the scorecards.

Welterweight Jake Ellenberger emphatically halted a two-fight skid, finishing Matt Brown in round one. Ellenberger dropped Brown with an overhand right to open the fight. He flurried for the finish, but Brown was able to recover and work back to his feet. Ellenberger scored with a kick to the liver that buckled Brown once more. Ellenberger smelled blood and flurried again to earn the TKO win.

Mexico’s Erik Perez went to war with fellow bantamweight Francisco Rivera, earning a unanimous decision after three hard-fought rounds. Rivera was technical early, staying disciplined with his boxing. Perez was patient and found his range as the round progressed. The second round saw Perez use his footwork and head movement to pull away from Rivera. He opened a nasty gash on the right side of Rivera’s head with an elbow. Round three started with a firefight as both fighters bit down on their mouthpieces and traded wild shots. Rivera rocked Perez, but punched himself out in the process. Perez capitalized with a takedown and he battered Rivera from top position until the final bell.

Despite stepping in on short notice, flyweight Ryan Benoit eked out a split decision over Fredy Serrano to kick off the main card. Benoit scored a knockdown early with a heavy right hand. Serrano used his strong wrestling attack to slam Benoit to the ground repeatedly. In the second stanza, Serrano’s takedowns were the only offense, as Benoit’s pace slowed. Both fighters had to dig deep in the final frame, but Benoit’s volume was the difference, as he claimed the decision win.

Nikita Krylov continued his march through the light heavyweight ranks, knocking out veteran Ed Herman with a head kick in round two. Krylov used his kicking arsenal to keep Herman at range. Herman scored with punches when he was able to close the distance, but he struggled to land with volume. In round two, Krylov threw a spinning back fist that Herman countered with an overhand right and left hook. However, Krylov launched a left head kick that connected flush with Herman’s neck, sending him crashing to the canvas unconscious.

Veteran Jorge Masvidal used his length and size to get the best of late-notice opponent Ross Pearson. Masvidal peppered the Brit with jabs in the opening frame, but Pearson marched forward. In round two, that strategy backfired, as Masvidal dropped Pearson with a left hook. He worked hard for the finish, but Pearson somehow survived. The pace slowed in the final round as Masvidal continued to work from the outside and cruise to the decision win.

Anthony Hamilton wasted little time dispatching of fellow heavyweight Damian Grabowski. Hamilton delivered an uppercut during the first exchange that rocked Grabowski. He followed Grabowski to the fence and connected with repeated uppercuts to finish the find in just seconds.

Flyweight contender Wilson Reis made short work of replacement opponent Hector Sandoval, submitting him in the first round. Sandoval threw wild strikes to open the fight, but Reis took him down and immediately took his back. Once there, the Brazilian attacked the neck of the newcomer, forcing a tap by rear-naked choke less than two minutes into the fight.

Welterweights Michael Graves and Bojan Velickovic battled to a lackluster majority draw in the night’s second bout. Velickovic controlled the range in the first round with his kicks. Graves clearly took round two with his grappling, taking the back of Velickovic and threatening with submissions. Round three was even, as both fighters struggled to mount offense. As such, two of the three judges scored it even.

Australia’s Damien Brown earned a violent, first-round knockout of Cesar Arzamendia in the night’s opening bout. Arzamendia was aggressive early, but Brown dropped him with a heavy right hand. Arzamendia survived and attacked with a heel hook. Brown escaped back to his feet and delivered another massive right hand that spelled the end for Arzamendia.