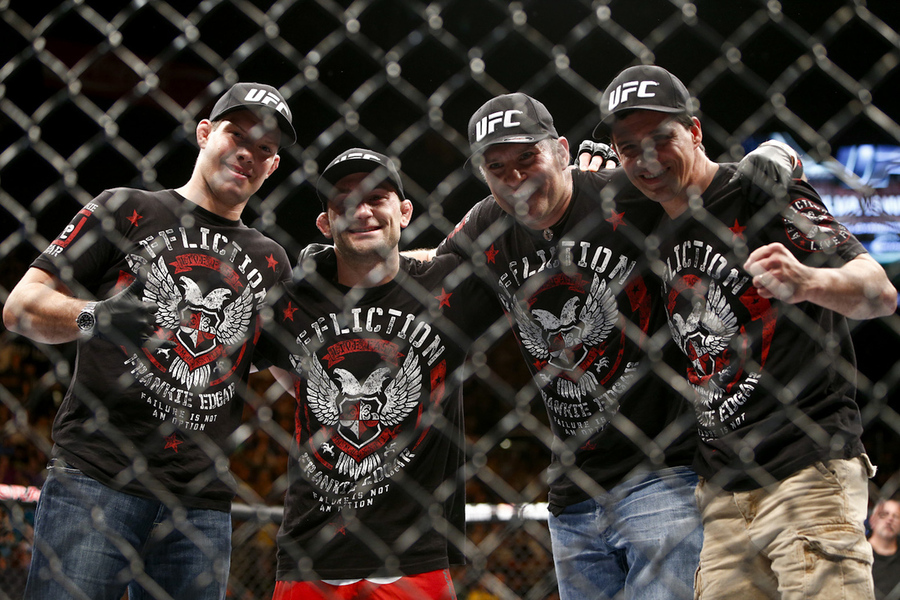 Frankie Edgar got the latest finish in UFC history against Cub Swanson in a dominant performance.

Swanson looked very calm in the first round as the confidence in his striking grew. Swanson was able to keep Edgar corralled, as Edgar was not as active as his previous fights. Edgar tried to secure the round in his favor, landing two takedowns on Swanson.

In the second round, Swanson continued to get the better of the exchanges as Edgar tried to counter. Midway through the round, Edgar landed his third takedown and quickly worked to half guard. Edgar was very active from the top as he transitioned and landed some big punches and elbows.

Swanson was visibly bloodied in the beginning of the third round. Edgar worked for another takedown just over a minute into the stanza and continued to pour on the ground-and-pound.

After a third round where Swanson had no discernible offense, the Jackson’s MMA fighter opened the fourth round by landing a couple of good shots. It didn’t take long for Edgar to get Swanson back down, though, and reclaim control on his opponent. Edgar eventually got into full mount and threw some more heavy hands. Swanson continued to give up his back and then let Edgar back into full mount as Edgar continued to swarm until the bell.

It only took a minute in the fifth round for Edgar to secure another takedown. Edgar got another chance from full mount to finish with ground-and-pound, but he went for the arm-triangle choke instead. Swanson avoided the finish, but continued to let Edgar dominate from the top. Swanson couldn’t hold on until the final whistle, as Edgar submitted Swanson with four seconds left in the round.

In the evening’s co-headliner, Bobby Green downplayed every strike Edson Barboza threw as the two engaged in their three-round affair. Green continuously shook his head or brushed his shoulders off after Barboza landed strikes early in the fight. It was certainly an interesting strategy, as Green didn’t land much of his own in the first round. Green attempted to do the same in the second round, but Barboza stiffened him up a couple of times—once with a spinning heel kick. Green was able to land a couple of combinations in the second frame as Barboza continued to work the leg kicks. Barboza continued to be elusive in the third round as he dodged most of Green’s attacks. Green continued to press forward and talk, but Barboza was able to counter. The judges decided in favor of Barboza, who took home the unanimous decision victory.

Chico Camus and Brad Pickett pushed a tough pace to the end. Camus was getting the better of Pickett on the feet early on. Camus landed some nice counters, a flying knee and visibly marked Pickett’s face. Pickett decided to take the fight to the ground to avoid getting clipped again by Camus. The two eventually got back to the feet and Camus got back to work. Pickett got Camus’s timing down in the second round as Camus continued to look for the counters. Pickett was successful on his second takedown attempt, landing a double-leg. It wasn’t long before the two were on the feet again, though, where Pickett continued to settle into the fight. Pickett was aggressive in the third round as Camus looked to slip. Camus continued moving throughout the round, landing very little in return. Camus won the fight by split decision with one judge scoring the fight 30-27 in favor of Pickett.

Jared Rosholt suffered his first loss in the UFC at the hands of Oleksiy Oliynyk. Rosholt had Oliynyk against the fence early in the fight, throwing hard punches. Oliynyk was defensive until the two separated from the cage wall. Oliynyk landed a hard left hand that dropped Rosholt to the mat. Rosholt was out before he hit the canvas, but Oliynyk followed up with a couple of punches before the referee finally was able to reach the two and stop the fight.

It was a typical non-title fight for flyweight Joseph Benavidez. The first round was domination from start to finish from the highly ranked flyweight, as Dustin Ortiz had no answer for Benavidez. Benavidez threw hard shots before solidifying the round in his favor with a late takedown. The second round was again heavily in Benavidez’s favor. The Team Alpha Male fighter swung some hard leather, and Ortiz’s only major success came in the form of a short-lived takedown midway through the round. Ortiz tried to score some points with a few takedowns in the third, but they were easily thwarted by Benavidez. Ortiz showed tremendous heart to last to the final bell, but heart wasn’t enough. Benavidez won by unanimous decision.

Isaac Vallie-Flagg controlled a majority of the first round in the clinch, but it was Matt Wiman who closed out the round strong with a nice string of submission attempts. Vallie-Flagg controlled Wiman in the clinch in the second round. Vallie-Flagg failed with another single-leg takedown and gave up his back to Wiman. Vallie-Flagg was able to get out of another rear-naked choke attempt before the two stood up to end the round. After a gritty first two rounds, the two fighters were exhausted. Wiman had a third shot to finish Vallie-Flagg with a rear-naked choke, but was unable to do so yet again. The fight went to the judges and Wiman took the victory by way of a unanimous decision.

Ruslan Magomedov proved just how good he is with his performance against Josh Copeland. It was a great fight from Magomedov, who used his striking to keep Copeland at bay for the majority of the fight. Magomedov bruised Copeland’s stomach with some hard kicks. He used his kicks to control the fight as Copeland tried to make it a brawl with some hard strikes and aggressive forward movement. Magomedov seemed to have hurt Copeland in the second round and swarmed the UFC newcomer. Magomedov couldn’t finish, however, and eventually settled for the unanimous decision.

Luke Barnatt and Roger Narvaez went to the judges, too, in what ended up being a razor-thin decision. The two spent the first couple of rounds feeling each other out. There were lots of feints, checks and jabs from both fighters over the span of two rounds. It wasn’t until the third round when the action finally picked up. Narvaez wobbled Barnatt with a head kick. Narvaez landed a right hand to a hurt Barnatt against the cage and, from there, went to work from Barnatt’s back. Narvaez worked hard for a rear-naked choke numerous times, but Barnatt denied him each time. Narvaez ultimately emerged as the winner by split decision.

James Vick and Nick Hein slowed the momentum from the first three fights when they locked horns in the fourth contest of the evening. Vick had trouble utilizing his range through the duration of the fight. Hein dropped Vick twice in the first round with solid shots and seemed to have a good grip on the fight going into the second. Hein took his foot off the pedal from there and let Vick back into the fight. Vick countered and moved to secure a second round in his favor. In the third, Vick moved a lot and sneaked in a few counters every so often. That was enough to allow Vick to secure the unanimous decision and a surprising score from one judge who even gave him the first round.

Akbarh Arreola spoiled the homecoming of Yves Edwards by handing the veteran a loss. Arreola dropped Edwards with a right hand after a minute of the first round. Edwards had trouble recovering and paid the ultimate price. Arreola then was able to transition to an armbar and finished off Edwards in just under two minutes of the first round.

The long-awaited debut of strawweight Paige VanZant finally came, and it took three rounds for the 20-year-old to put away Kailin Curran. It was a great fight between the two women, as VanZant was aggressive at the opening of each round, pressing Curran back. VanZant nearly finished the fight at the end of the first round with a flurry of punches. Curran was saved by the bell and lasted to the second round, where she was once again in trouble against VanZant. This time, VanZant was looking to finish with submissions. The third round came and VanZant was able to stop Curran with just over two minutes remaining in the fight.

Doo Ho Choi certainly made a statement in his UFC debut against Juan Puig. It took less than 20 seconds for the Korean featherweight to land a flush shot and TKO Puig.