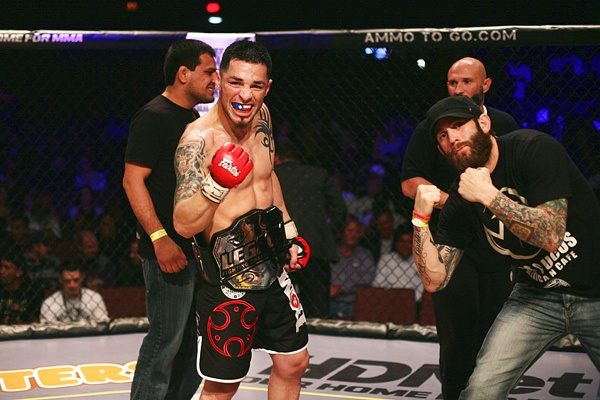 On Friday, Nov. 14, Legacy Fighting Championship hosted its 37th event from the Arena Theatre in Houston.

In the night’s main event, UFC veterans Leonard Garcia and Daniel Pineda collided in the Legacy cage. Both featherweights were looking to get back in the column at the other’s expense. Garcia saw a three-fight winning streak snapped against Damon Jackson in July at Legacy FC 33. Pineda returned to the promotion for the first time since 2011. The 29-year-old went 3-4 inside the Octagon, but had dropped four of his last five outings.

The co-main event of the evening featured Bellator and Strikeforce Mike Bronzoulis taking on the surging Justin Reiswerg. Bronzoulis had fallen on tough times recently, having dropped three straight fights. Reiswerg, meanwhile, had won seven of his nine appearances under the Legacy banner, including his last three bouts. Seven of the 26-year-old’s eight career wins had come before the final bell.

Also on the card, submission ace Augusto “Tanquinho” Mendes made his promotional debut and looked for his third professional win as he took on Richard Delfin.

Larry Crowe was able to get the quick finish over Quentin Henry. In the beginning of round one Henry was able to work the jab. After a few landed, Crowe worked inside and was able to get Henry to the ground. Once there, Crowe mounted the back of Henry and worked heavy ground and pound. The referee was forced to stop the bout due to Henry not being able to defend himself.

Geoff Neal and Charles Ontiveros proved the fans with a very entertaining bout. The biggest action in round one came when Ontiveros was able to avoid a takedown and attempt a guillotine on Neal. Neal was able to escape when he scored a takedown with a slam. In round two, Neal was able to roll into a heel hook that, on further replay, looked that Ontiveros tapped to, but the referee missed. Prior to the round ending, Neal was able to get a good amount of ground and pound that ended the fight with a doctor’s stoppage due to a broken jaw sustained by Ontiveros.

Welterweights Jonathan Harris and Antonio Flores brought a little bit of everything, including a point deduction at the end of round one. Harris was able to get quick takedowns and work heavy shots from the top position. At the end of the first round, Flores threw a kick that landed in the neck area. Harris was still grounded, with both knees on the mat. The referee had no room for wiggle. It was more of the same in round two, except for a period when Flores was able to get some separation. Harris was able to dominate his way to the unanimous decision victory.

The night’s main card action began with upstart bantamweights Augusto Mendes taking on Richard Delfin. In the opening 10 seconds, Mendes was able to get Delfin to the ground. From there Mendes showed why he is feared on the ground, getting the win in under a minute with a very fast-transitioned rear-naked choke.