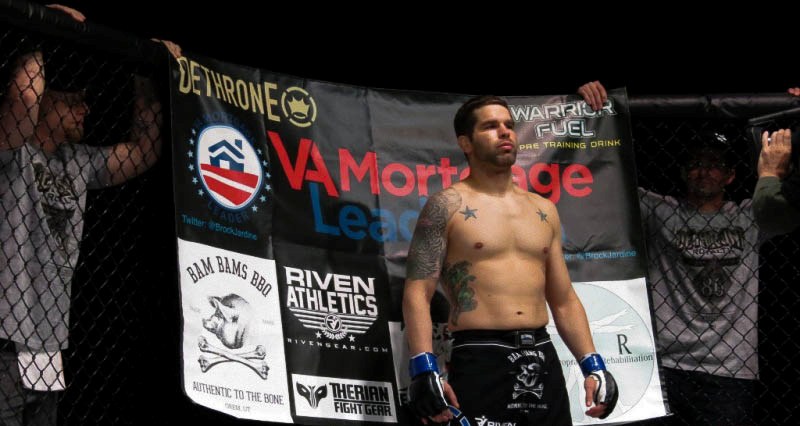 Frustration is some tricky business, especially in pro athletes.

When an athlete finds himself in a rut, there are a number of emotions that can surface. More than anything, frustration rears its ugly head almost 100 percent of the time. It’s how frustration is handled that really sets people apart.

Earlier this year, Brock Jardine found himself in a rut. After back-to back losses ended in a release from the UFC, the 29-year-old pro fighter, who was 9-1 before hitting the rut, found himself searching for change.

Before his last fight, which took place at Titan FC 28 in May, Jardine really amped up his training. He was set to fight a very tough veteran in Daniel “Ninja” Roberts, and he wanted to showcase some of his new proficiencies in hopes that he would finally break out of his rut.

As the fight progressed through three full rounds, Jardine really broke out of his previous comfort zone and showcased some new moves. However, at the end of the fight, the wrestling and defensive moves of Roberts paid off, earning him a close split decision win over Jardine.

“I should’ve kept it a little more simple,” Jardine admitted in an interview with Combat Press. “I wanted to show how evolved my striking was. I threw a lot of kicks. Some of them were really good, but it ended up getting me in trouble when I got taken down off a couple kicks. That’s how he won the fight. I mean, taking me down, holding me down, ground-and-pound, going for some submissions, you know? I’ve really been working since then on keeping things simple [and] doing what I’m good at, which is punching people in the face.”

Jardine is a finisher. Out of his nine wins, he has four submissions and three knockouts. But that frustration of getting cut from the UFC really triggered him to go for some new stuff. Some of it worked and some of it did not. At the end of the day, he brought his skid to three. He knew he needed to get back to the basics.

“Lately, I’ve been working a lot with a pro boxer because, after that last fight, I realized I need to keep things simple,” explained the Utah-based fighter. “You know, I’ve got good hands, good wrestling, good [jiu-jitsu]. It was fun throwing all those kicks, and I landed some good spinning back kicks to the body [and] I landed a couple of head kicks, but, essentially, that’s what lost me the fight. He was able to take me down. Daniel Roberts is no joke on the ground. He was able to hold me down a little longer than I would have liked. I’ve definitely been working a lot on boxing, and, since I was working with Jake Shields, I’ve been working a lot of [jiu-jitsu] since I’ve been back. I’ve been doing a lot of grappling.”

Jardine trains out of The Pit Elevated in Orem, Utah, with the likes of Steven Siler, Court McGee, Josh Burkman and the Nijem brothers, Ramsey and Adam. Within the last year, the Nijems made the move to Empower Gym in San Francisco to train with Tareq Azim and his crew, which includes Shields. Jardine’s friendship with Ramsey led to some training opportunities for Jardine in California, and he took full advantage.

“I trained a bit with Jake Shields and Tareq Azim when I was in Sacramento for Ramsey’s fight,” said Jardine. “We went over to Urijah Faber’s gym and all trained together over there. With teaching and coaching and my 4-year-old daughter, it makes it a little hard to get away and train.”

That was back in August at UFC 177. In September, Jardine found out that he was scheduled for his second Titan FC fight, which takes place this Friday night at the USF Sundome in Tampa, Fla. A few weeks later, he found out that his opponent is Steve Montgomery.

Montgomery is an American Top Team fighter who has been a pro since 2010. Like Jardine, he is a well-rounded, tough fighter with all but one of his seven wins coming by stoppage. Jardine knows that Montgomery is no walk in the park, but he also knows he needs to get back in the win column.

“He’s a really scrappy kid, so definitely I plan on looking for the finish like I always do in my fights,” said Jardine. “I realize that with this guy it might be a little harder. It’s not going to stop me from reaching my goal of finishing him, but I’m still planning on going 15 minutes, even though that’s not what I prefer. You know, I have the cardio, I train at elevation, and I like to push people and break them. I’m preparing to go 15 minutes because he’s very durable. Hopefully, I’ll get my goal of a finish.”

When a guy with 90 percent of his fights going the distance makes a statement about going for “the finish,” eyes start to roll. In the case of Jardine, however, fans should expect nothing less. Frustration can manifest itself in different ways, but when a guy says he’s going to keep it simple and go for the kill, that’s a healthy and dangerous manifestation of the emotion.

Jardine has been in the UFC and knows he has what it takes to get back. The flashy, new moves he pulled out against Roberts looked great, but being able to incorporate that into his old-school game plan is essential if he wants to get back to his winning ways. That being said, he made another trip out to the Bay Area. This time, though, it was all business.

“I got to go out to California and train with Jake Shields out there for a week,” Jardine elaborated. “That was a great experience and great training out there. I trained at El Nino Training Center and got to train at Empower Gym with Tareq Azim. That’s where my buddy Ramsey is at now. It was a very good week for me in the middle of camp. I got to pick things up and train elsewhere. I got to stay in the middle of downtown San Francisco, so that was fun as well.”

While it may have only been a week, those little shakeups help keep that edge in a fighter. Jardine is about as calm and cool as they come, and while the frustration is there, one would never know it. He keeps a very even keel. However, the subtle excited tone that is in his voice going into this fight says a lot about where he is mentally. The guy is focused and ready for a war.

“I feel comfortable wherever [Montgomery] goes,” Jardine intimated. “You know, I can beat him on my feet. The biggest challenge is going to be finishing him. That’s what I’m thinking. He’s got good cardio as well, so he might be able to push the pace on me. I’m just trying to make sure I’m winning every round as I’m trying to finish. That will keep me from getting outpointed.”

Jardine’s game plan is scary calm. The more relaxed he is, the more dangerous he is. As we spoke, he sounded relaxed enough to scare the dickens out of any old soul on Halloween night. With teammate Jesse O’Rullian in his corner, Jardine will be looking to bring home a pretty awesome treat—getting back in the win column—all tricks aside.

Brock would like to thank all of his coaches and teammates at The Pit Elevated, as well as the guys who helped him out in San Francisco. He would also like to thank his family and friends, and his sponsors: VA Mortgage Leader, Dethrone, Warrior Fuel, Riven Athletic and Bam Bam’s BBQ. Follow Jardine on Twitter: @BrockJardine
Advertisement