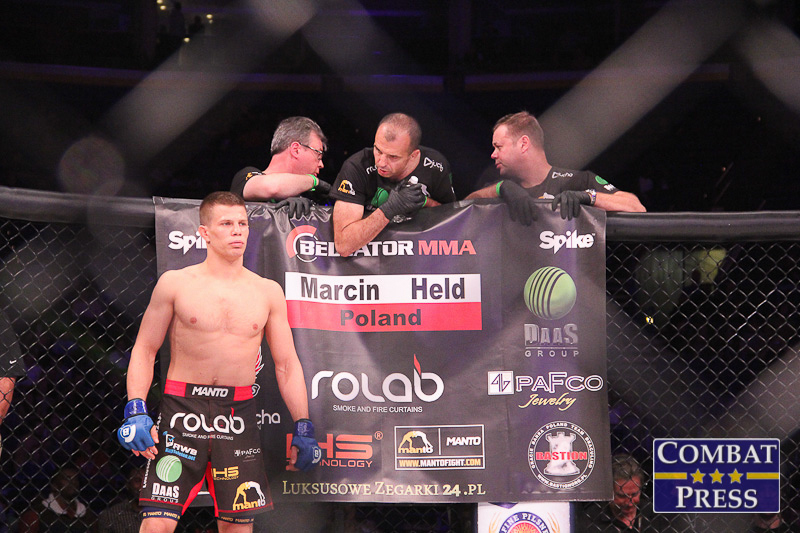 The Door Swings Both Ways: Signing Marcin Held Could Be Big for the UFC

Marcin Held has long been one of the top lightweights on the Bellator roster. He has beaten some of the promotion’s top names and competed for the lightweight title. Now, the 24-year-old is moving on to greener pastures to fight even bigger names in the UFC.

Held is following in the footsteps of some of the best lightweights Bellator has ever seen.

There’s Eddie Alvarez, the former Bellator lightweight champion who dominated that promotion before moving over to the UFC where he has climbed the ranks to become the UFC lightweight champion. Alvarez battled his way up after making a name for himself outside of the UFC. His debut in the promotion was so heavily hyped after years of looking like a world-beater in Bellator outside of his lone loss to Michael Chandler.

There’s another former Bellator lightweight champion, Will Brooks, who also made a move to the UFC. Bellator failed to utilize him properly after he dispatched Chandler in convincing fashion twice. Brooks recently signed with the UFC and is coming off a victory in his promotional debut fight against UFC veteran Ross Pearson.

The UFC gets a huge win here, as Held is a really entertaining fighter. His grappling is top notch and he excels at leg submissions, something that is very rarely seen inside the UFC. Held could certainly go on a Demian Maia-esque run and use his grappling to run through a good portion of the division. Held’s grappling is, of course, not at Maia level — is there anybody really at that level? — but he is still extremely young and has certainly improved leaps and bounds since he first stepped into the spotlight in Bellator.

Held is capable of following in the footsteps of Alvarez and Brooks. It might be too soon to say he definitely will. He hasn’t even made his UFC debut yet. However, confidence should be high in the Polish fighter after his past performances in Bellator. His three losses came against the best competition he faced in Bellator, including the aforementioned Brooks and Chandler.

Yet, it’s those losses against strong wrestlers that could highlight a hole in Held’s game. His struggles against elite wrestlers could prove a little problematic in a lightweight division that has a lot of good wrestling talent. If opponents can keep Held off the ground or control him from top position, they can prevent him from really getting anything going. Wrestlers have minimized the openings Held sees with his submissions.

The biggest issue with Held might be in his striking. It is still a little green on both the offensive and defensive side. Held has shown power before — he knocked out Ryan Healy at Bellator 101 — but he really hasn’t flashed leather on a regular basis. This isn’t to say he hasn’t improved in the striking department. He is far better than he once was, and he has demonstrated steady improvement through his last few fights. If Held can develop his striking to help set up his grappling attack, then he would be set. Held’s grappling is certainly his biggest strength. He could conceivably use it to beat guys between the Nos. 10 and 15 range in the UFC rankings. However, it’s his striking that will need to improve if he wants to fight the true top guys and reach Alvarez’s level.

Held is a potential future top-10 UFC lightweight. He could be a title contender down the road. Want more proof? Look at his Bellator 126 win against Patricky Freire, or the Bellator 155 fight in which he avenged a prior loss to Dave Jansen. Don’t forget Bellator 136, where he submitted Alexander Sarnavskiy, another one of Bellator’s top grapplers. It wasn’t even just your typical run-of-the-mill submission either, but an unexpected kneebar against one of the division’s top grapplers. These fights alone lend credence to just how good Held can be. It will just take time and patience to see how much he can develop as a fighter.

At age 24, Held still has yet to hit his prime athletically and physically. The best is yet to come. The UFC has made a smart signing by snatching one of the top prospects from Bellator at a young age.