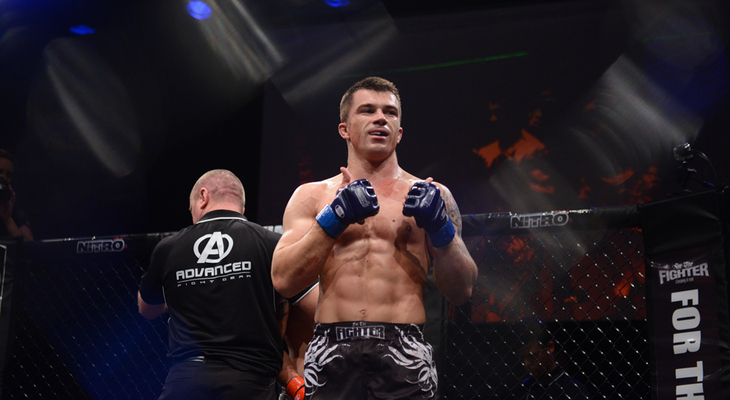 The smell of burning rubber fills the air. Engines are revving in unison as the crowd roars. For the rev-heads in attendance, there is no other place they would rather be. This is their Super Bowl, their World Series, their Grand Final. It’s exhilarating. It’s addictive.

As a race car driver, Alex MacDonald wasn’t doing too badly for himself. He was overachieving while engaging in an activity he loved. Well, something that he thought he loved.

“I used to race in motorsport and I was gonna get into boxing for fitness,” MacDonald explained to Combat Press. “I’d been doing it for seven years and won a few titles in it and was doing quite well. I guess I sorta fell in love with MMA and started doing that, and it all changed my plans. My dream was to race in the V8 supercars. I used to do it when I was back in New Zealand and I was building a car up when I was over here, and then it all changed around. A mate told me about MMA, and I watched a video and sorta liked it and then got hooked on it from there and had my first fight four weeks after that.”

The move from New Zealand to Australia was life changing, to say the least. Gone were the days of a fuel-injected adrenaline rush. Instead, MacDonald was donning the gloves and entering the cage. It gave him a feeling that he had never experienced before. He is now located happily in Australia, but heading back to New Zealand at some point is certainly a reality for the 27-year-old.

“There’s a lot more stuff to do over here and a lot more opportunities,” MacDonald admitted. “I’d been looking at [fighting in New Zealand] last year as well, because my father hasn’t seen a fight yet and I’ve had a few now, so I thought it’s about time to have one in front of him. It’s definitely something I’ll be looking into next year. It would mean a lot to be able to fight over there. I’ve got a lot of family over there, so it’d just give me that extra boost. It would definitely mean a lot to me. My father has always been an inspiration as I’ve been growing up and he’s helped me out every step of the way, and it’d be a great opportunity.”

Changing gyms can be one of the hardest experiences in a fighter’s life. Getting used to one style of training or sparring can be hard enough, but it can be like starting all over again when they leave to find a new home. Sometimes, it’s the best thing that a fighter can do. MacDonald’s own move took him to the well-regarded Integrated MMA in Brisbane.

“It was the talent and the skills that they have there,” MacDonald said. “They’ve got Dan Higgins, Adrian Pang and a lot of good guys, especially in my weight division. There are a lot of fighters from the lightweight division and it’s a lot more MMA orientated. I’ve seen a lot of things change since I moved and it’s definitely made a big difference.”

The move wasn’t without its sacrifices for MacDonald. In order to train, he has to make a long commute. However, like all things in life, with great sacrifice will come great rewards.

“I travel an hour each way,” MacDonald revealed. “I’m sorta looking at a place to move to [in Brisbane], so hopefully something comes up. I’ve been looking for the last four weeks. I get all the traffic going up there, but it’s not too bad coming back. It’s definitely a bit tough, especially when they have late classes. It does take a bit out of ya. I knew it was gonna be a bit of a drive to get there, but you’ve gotta make that sacrifice sometimes.”

When he’s not fighting, MacDonald works as an electrician. It provides him with the luxury of being his own boss. With a hectic schedule that sees him wake up at 4:30 in the morning to start his day off with a run, it helps to be in control of his own work schedule.

“It makes a long day, but it’s not too bad. You know what you’ve gotta do and just drive towards it,” MacDonald said. “It’s good, though, because if I need to finish work early to get to training or something, I can just call the shots. I don’t have to ring the boss and be like, ‘I’ve gotta finish early,’ especially when it comes up to the time to cut weight and I’ve gotta take the Friday off work. My old boss used to have a hard time with that. It’s good now.”

MacDonald heads into his Oct. 11 bout at Nitro 12 against Brentin Mumford with back-to-back losses behind him. It’s his first fight with the team at Integrated MMA in his corner, and a win in this bout will see all the hard work he has put in over the past few months finally pay off.

“It’s mentally tough,” MacDonald confessed. “I was doing good up until those two losses. So, to get back into the winner’s circle, I’ve just been trying hard with training and working my ass off. It’s important to me to get back to winning. It’s gonna be a good fight and it’s gonna be a tough fight. I seen his last fight, so I’m expecting it to be a tough three-rounder. So, I’ll be putting my all in it to get the finish. It’s good there at Nitro. I like it. This will be my sixth fight on Nitro. It’s always a good event with a good crowd. This fight is pretty important. I’ve gotta get back in there and do everything I can to get the win and put on a good show.”

Alex would like to thank For The Fighter Logan, Elite Body Maintenance, Primary Security Group, Fairtex and Integrated MMA.
Advertisement