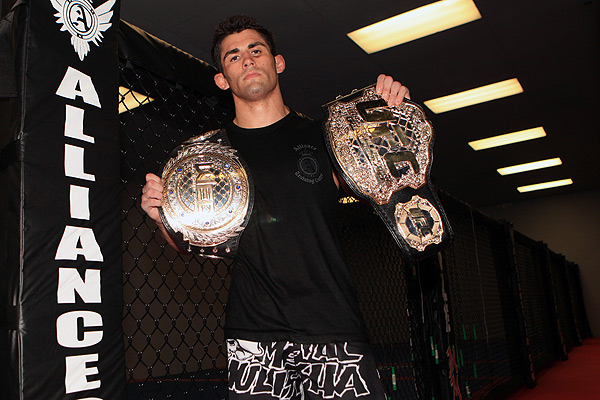 Scorecards Be Damned: Dominick Cruz Back With a Vengeance

I’ll admit it: There were likely not many UFC fans who were happier than I was on Jan. 6, 2014, when company president Dana White announced that Dominick Cruz was vacating his bantamweight title after a lengthy injury-related layoff. The move promoted then-interim-champion Renan Barao to actual bantamweight champion, where he would remain until being knocked off his pedestal by current titleholder T.J. Dillashaw at UFC 173.

I’ll also admit that I was not particularly excited when the UFC announced Cruz would be returning to the Octagon at UFC 178 during the event’s preliminary portion. It’s not that I dislike the guy, and I certainly don’t wish him ill; I just didn’t find him particularly enjoyable as a fighter. Yes, his pick-and-pop style has certainly been an effective one—he has, after all, only lost once in 21 professional fights and had his title reign stopped only because of the lengthy hiatus from competition—but to me that stuff is the striking equivalent of the so-called “lay and pray” offense used by some wrestling-based fighters. Does it result in wins? Sure. Does it result in exciting fights? Not as often.

Before his return to the UFC on Saturday, Cruz had won his last four fights by decision, and the TKO victory he scored over Brian Bowles before that was the result of Bowles breaking his hand. In each fight, Cruz gained the scorecard advantage through speed and footwork, closing the distance to land a punch or two before quickly exiting his opponent’s range. Utilizing this offensive strategy meant that Cruz took very little damage over the course of his most recent fights, but it also meant that he didn’t inflict too much either. Again, one must respect any fighter who has won 20 times while only losing once, regardless of how those wins were earned, but of recent UFC champions, Cruz was at the bottom of my list of fighters I was interested in watching.

This, of course, all changed after UFC 178, when Cruz put on not only the most dominant performance of his UFC career, but one of the most dominant performances we’ve seen from any fighter this year. I was concerned that Cruz, pitted against fifth-ranked Takeya Mizugaki for his comeback showcase, would employ his patented feint-based offense en route to another decision. After all, one might imagine that a fighter who had previously displayed such a conservative strategy while on a regular competition schedule would want to stick with what worked in his first fight in three years.

That did not end up being the case.

While at first Cruz used his footwork to avoid the strikes from his opponent, he suddenly shot in for a tremendous double-leg takedown about 40 seconds into the fight before employing the sort of brutal ground-and-pound that would make Mark Coleman proud. The fight ended less than half a minute later when the referee stepped in, marking the first time that anyone has stopped Mizugaki with strikes since 2006. Needless to say, Cruz not only reminded a lot of people of his championship-caliber talent, but also probably made quite a few new fans in the process.

Cruz is clearly no dummy. In the significant time between his two most recent fights, fans have regularly seen him providing great commentary on Fox Sports 1 as part of the network’s frequent pre-fight panels. Surely, then, Cruz knew that in order to boost his title-contention prospects after such a long time away, he not only needed to beat Mizugaki, he needed to finish him. This is especially true considering fourth-ranked Raphael Assuncao competes this coming weekend against Bryan Caraway in an attempt to win his seventh straight fight. Assuncao was originally supposed to face Barao at UFC 173 before withdrawing due to injury (and being replaced by Dillashaw). Had Cruz simply jabbed his way to a decision over Mizugaki, a win for Assuncao on Saturday would likely have resulted in the Brazilian being named the top bantamweight contender, rather than the former champion.

Instead, Cruz’s remarkable performance catapulted him into the division’s second-ranked spot and netted him the next shot at the belt he once possessed, and I can’t think of a single reason he doesn’t deserve it. In just about any other situation, one would have to argue that Assuncao deserves the next title shot with a win over Caraway on Saturday. It would be Assuncao’s seventh consecutive UFC win (including a decision victory over Dillashaw in October 2013), and someone on that kind of hot streak simply cannot be denied his shot at the title. Cruz is, however, the former champion, and he never conceded that belt to another fighter. Had Cruz been able to make his scheduled fight with Barao back in February, there’s a chance he’d still be champion today. Combining his unbeaten championship reign with a performance against Mizugaki that certainly lived up to Cruz’s “Dominator” nickname makes Cruz an easy pick to vie for Dillashaw’s belt next, and I, for one, couldn’t be happier.